I won’t admit to a Royal Wedding obsession, but I do look forward to the event, the pageantry and the beautiful clothes. Working here at Threads, I’m interested in Prince William’s tailor (he chose Gieves & Hawkes of London’s Savile Row) and of course Kate’s wedding gown. The gown designer is a closely-held secret, but many news sources report it is Sarah Burton, creative director of Alexander McQueen’s line.

This week I saw that the gossamer “dress” Kate Middleton wore at a 2002 University of St. Andrew’s charity event is was put up for auction today, March 17. The handknit sheer tube was expected to draw more than $8,000. I just checked, and according to Reuters and the AP, the dress brought in more than $120,000 dollars.

The Internet is abuzz with the story – along with all kinds of pre-wedding coverage – but I was very interested to hear what the designer, Charlotte Todd, had to say about the dress. I’ve included an AP video about the auction and Charlotte talking to the press about the dress and her plans to auction it.

I always wondered what she was thinking! According to Charlotte, she didn’t have a hand in styling the dress at the fashion show. She considered it a skirt, and thought it was going to be worn over a slip. Someone, be it Kate or a stylist at the event, decided to style it as a dress, over black undergarments.

Supposedly, it was this garment that turned William’s interest in his fellow student Kate from platonic to romantic. Charlotte says she had a feeling the relationship was going to “go the distance,” and that’s why she saved the delicate silk garment all these years.

Do you plan to watch the royal wedding on April 29? It airs at 6 a.m. East Coast time on BBC America. The next big news, of course, is likely to be the announcement of Kate’s chosen wedding dress designer. Who do you think it will be? 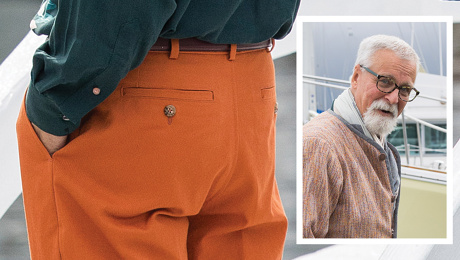