I don’t often truly envy the Project Runway designers – they have to work very hard, live with strangers, and face public scrutiny and criticism. I think the winner earns that prize package.

Last week’s episode, however, made me wish I could step into the shoes of one of the All Stars! In a first for Project Runway, the four remaining designers got to go to Paris, visit the Valentino atelier and showrooms, and attend a preview of the Valentino haute couture runway show. The challenge for the episode was to get inspired, then create a couture dress, double-quick.

There was sketching, practically in the shade of the Eiffel Tower, followed by fabric shoping at Janssens & Janssens with 3,000 Euros each.

The House of Valentino creative team of Maria Grazia Chiuri and Pierpaolo Piccioli met with the designers in Paris. Back in New York, designer Cynthia Rowley (featured in the Designer Spotlight in Threads no. 163) was the guest judge.

This was the final elimination challenge before the face-off runway collections. I know I had a favorite before the runway presentation. How about you?

On to the couture garments!

Anthony Ryan Auld won for his mixed-texture black dress. Anthony has consistently demonstrated a knack for interesting and flattering seam placement. Carolyn had a good point, though: perhaps the dress needed a visual break somewhere, a chance to breathe. 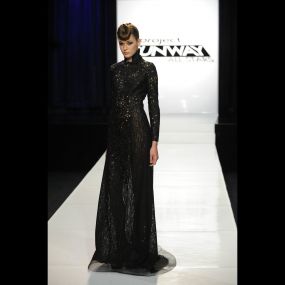 By “safe,” I don’t mean to denigrate Emilo’s design. The lightweight fabric, the wide shoulders and high waist seam were all very interesting and Emilio came a close second to Anthony. Isaac remarked, and I think he was correct for once, that bringing up the hem about 5 inches, deliberately exposing the shoes, could have made the dress even better. 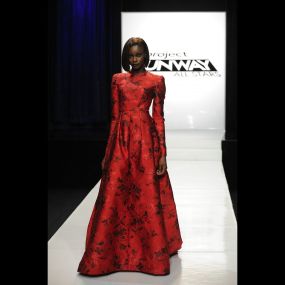 Uli and Joshua were the bottom two. The judges gave them a second, speed, challenge, asking them to create another look from their dresses. Uli won the second challenge. Unfortunately, A&E Networks, the source for the images I include with these posts, did not include images of the second challenge garments in the press materials for this episode. 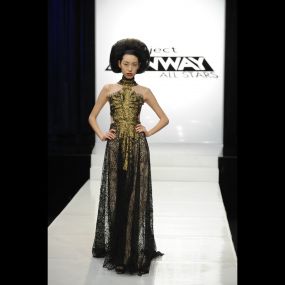 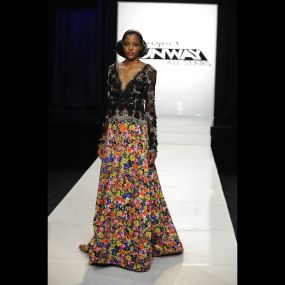 Goodbye, Joshua. Were you surprised that he was out this episode?

I had a sinking feeling the moment I saw Joshua selecting his print at Janssens & Janssens. What did you think of his finished design? Do you think it could have been saved with a different scale print for the skirt?

Wasn’t it fun to see behind the scenes at Valentino? And how about that Valentino red jumpsuit Carolyn wore for the runway judging? Didn’t she look fantastic, and it was utterly simple? If you could visit any designer atelier, which house would it be?

Are you excited to see the All Stars finale next week?! Care to make a prediction about the winner?

Also coming up, another season of the original Project Runway. Did you hear about the twist: It’s an all team-challenge season. Every challenge, teams! I’m very interested to see how this turns out.

Joanna Coles and The House of Valentino creative team, left, present the remaining designers their eleventh challenge on Project Runway All Stars.

Emilio Sosa's design for the eleventh challenge of Project Runway All Stars.

Anthony Ryan's design for the eleventh challenge of Project Runway All Stars.

Joshua McKinley's design for the eleventh challenge of Project Runway All Stars.

Uli Herzner's design for the eleventh challenge of Project Runway All Stars.

Only three All Stars remain after this couture challenge.