Project Runway Season 11 redeemed itself last week, with an unconventional materials challenge that offered lots of drama and some spectacular design results.

In episode 4, “The Ultimate Hard and Soft,” each team had a budget of $2,500 to shop at a florist’s and at a hardware store. Each team had to create a cohesive six-look collection. The individual garments could use materials from the one store or both, as long as both hardware and flowers were represented in the collection.

The first order of business was rearranging the teams. The Dream Team was down to five members, while Team Keeping It Real was still at eight members. Tim Gunn told the Dream Team they could “steal” two members of Team Keeping It Real. They took Stanley Hudson (for his construction and organization skills) and Layana Aguilar (for her sexy, feminine approach to design and willingness to say something if she didn’t feel a design was working). Then there was a twist – Tim told Team Keeping It Real that they could steal one original Dream Team member. The choice was unanimous: They nabbed Michelle Franklin.

The guest judges were Bette Midler and fashion blogger Leandra Medine. If you aren’t familiar with Leandra’s humourous fashion blog, it’s called The Man Repeller (ManRepeller.com). What is a man repeller? As Leandra defines it:

outfitting oneself in a sartorially offensive mode that may result in repelling members of the opposite sex. Such garments include but are not limited to harem pants, boyfriend jeans, overalls (see: human repelling), shoulder pads, full length jumpsuits, jewelry that resembles violent weaponry and clogs.
Check out her blog if you get a chance!
On to the results:

The winner and the winning team

Upset! The Dream Team (albeit with new members) one their first challenge of the season. Stanley Hudson, great organizer that he is, gave the team a theme: 1950’s Christian Dior that gave Dream Team the edge with the judges for having a cohesive collection.
Samantha Black’s winning design: 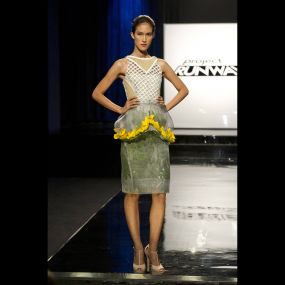 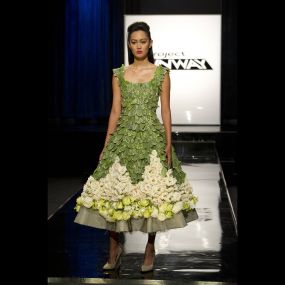 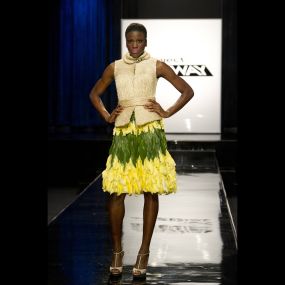 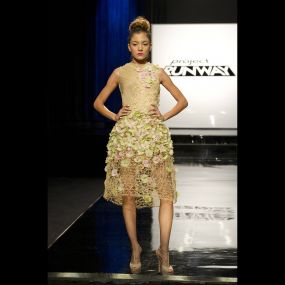 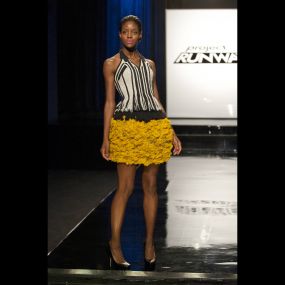 The loser and the losing team

Team Keeping It Real lost the challenge mainly because they didn’t work to have a cohesive collection. The individual pieces were excellent, but the colors and silhouettes didn’t work with each other.
Joseph Aaron Segal’s losing design was too shapeless for the judges: 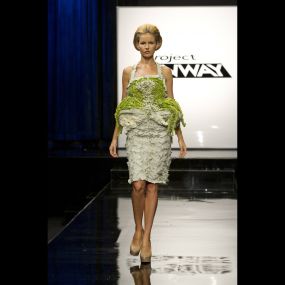 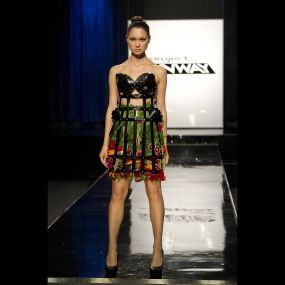 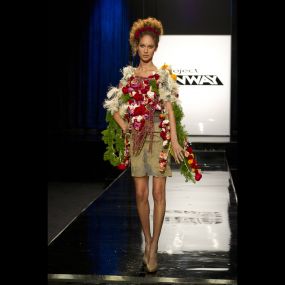 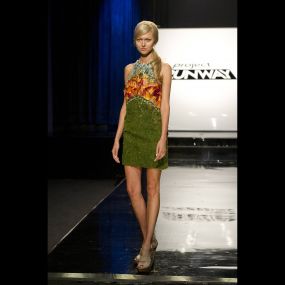 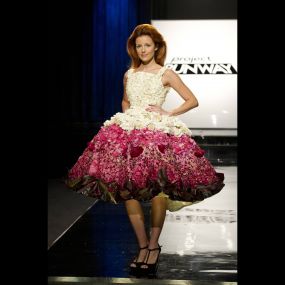 Some of the designs on this episode were amazing, especially considering the materials!
Who do you think had the most innovative use of materials:
Mat, for his mop-cord top.
Benjamin, for his woven-rope bodice.
Richard and Michelle’s sculpted mini-blind bustier and skirt lattice.
Or, Samantha’s wire mesh and leaf sandwich skirt?
Did you enjoy the episode? What unconventional material, that Project Runway hasn’t featured yet, would you like to see the designers work with?