This week’s challenge was inspired by the new line of Samsung curved televisions, designed to create a perfect viewing experience from any angle. Drawing from this, as well as Samsung’s ability to be on the cutting edge of technology and innovation, the remaining nine designers were asked to design avant-garde looks that would make an impact from every angle. Are you ready for a twist? The runway was transformed into a “rainway,” meaning the designers would have to use waterproof materials to design their looks. Two days and $300 were provided for this challenge.

This week’s guest judge was Master of Sex star Caitlin Fitzgerald. As usual, Kini had no reservations about this challenge and was determined to win. His design was inspired by an umbrella, and boy did he make it work. The judges all agreed that Kini’s look was sublime, impactful, and just plain marvelous. Following Tim’s workroom consultation, everyone knew Sean’s design was either going to steal the show or be a major flop. Sean constructed his white dress with what looked like several casings that he filled with fabric dye. The idea was that as soon as the rain hit his garment, the dye colors would appear and “magically” transform the dress, and it worked! The judges thought Sean’s dress was exceptional and liked how the bright colors portrayed a positive feeling of being in the rain. Sandhya’s dress demonstrated a similar emotion, represented by numerous strips of colorful fabric underneath a layer of pinwheels, which the judges appreciated.

Emily, on the other hand, had a major miss this week. While she incorporated the shaping and sculpting techniques found in typical avant-garde looks, the judges found her design to be cliché and dated. Korina’s look was also dissapointing; it’s a good thing she had immunity! She started her critique with a great backstory about how she was inspired by a thunderbird. The problem was how she executed her vision. The judges thought it was lackluster and unfinished. Finally, Fäde took the stage with his graphic dress, inspired by the actual Samsung television. Unfortunately, the judges thought his design was gimmicky and didn’t push the envelope. He was sent home while Sean and Kini were the winners. 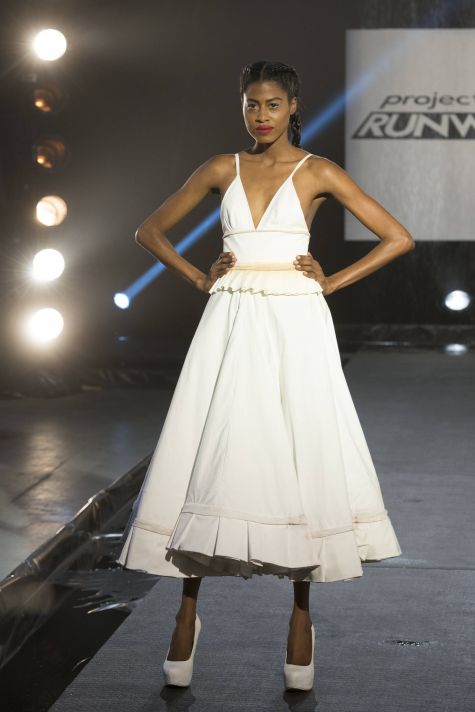 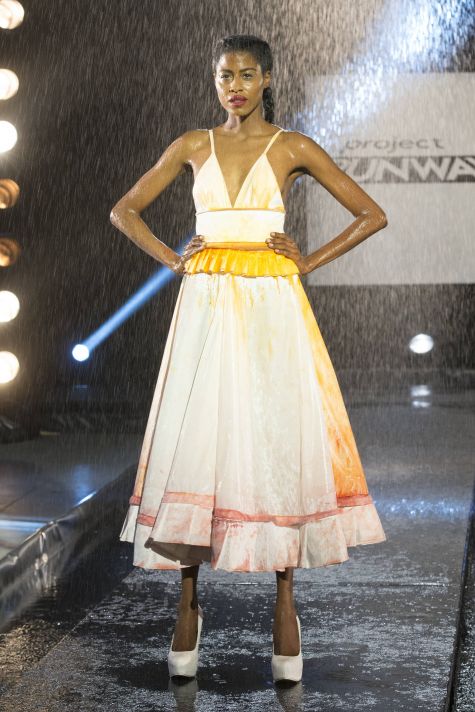 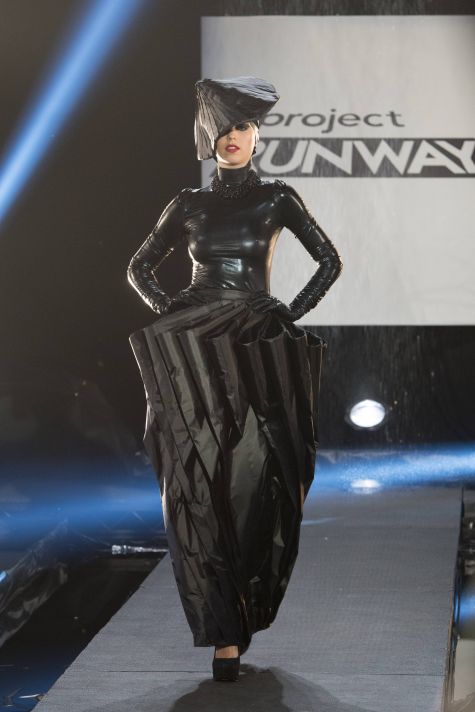 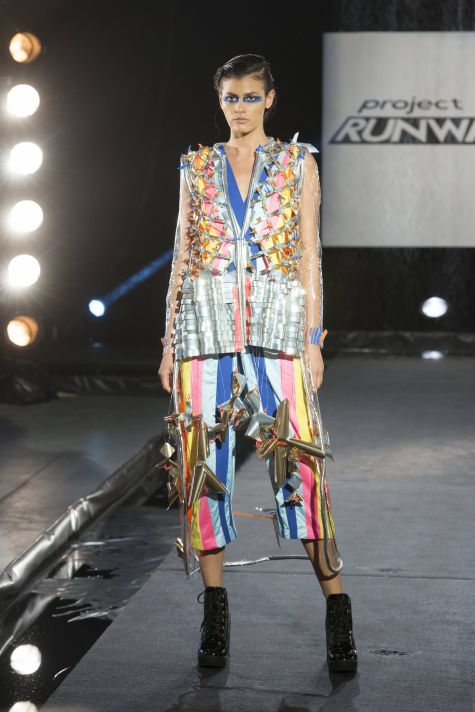 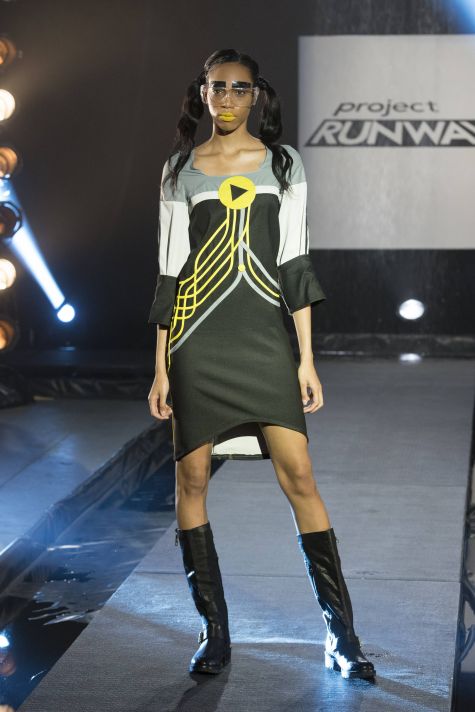 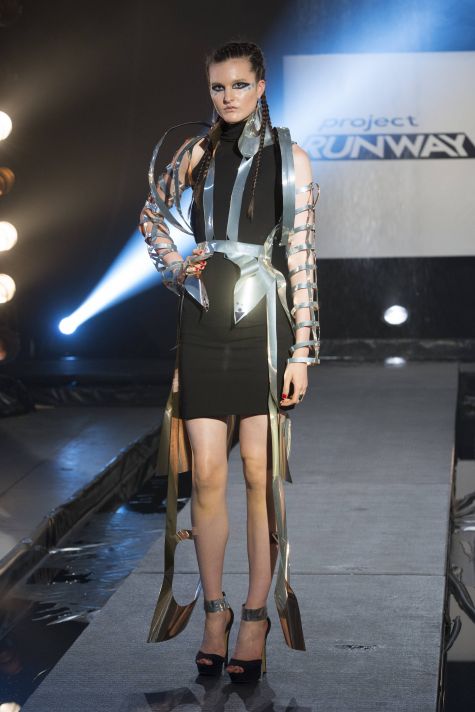 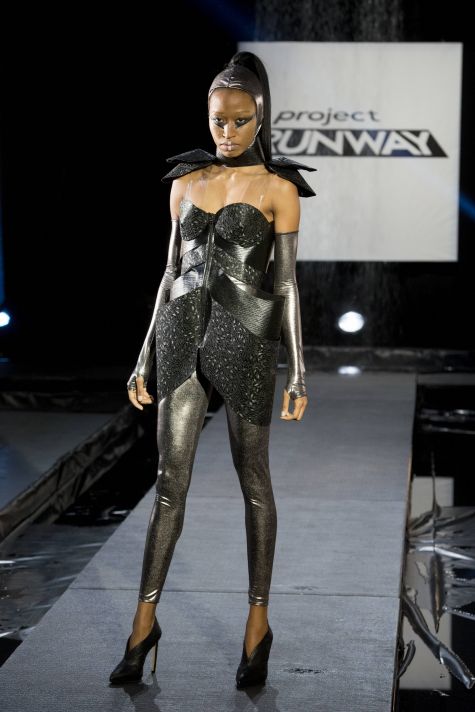 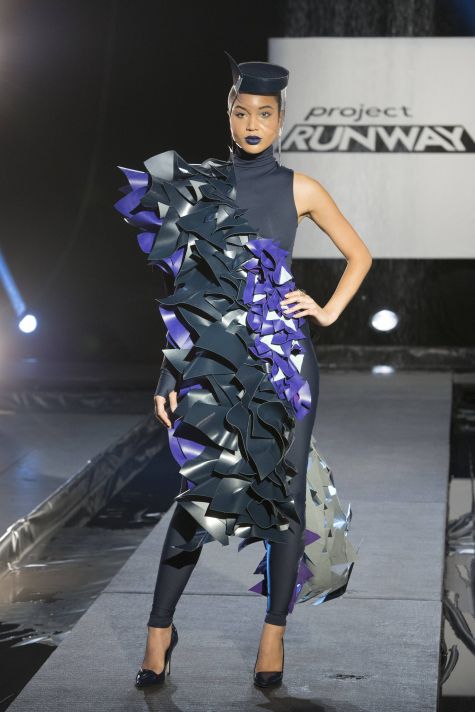 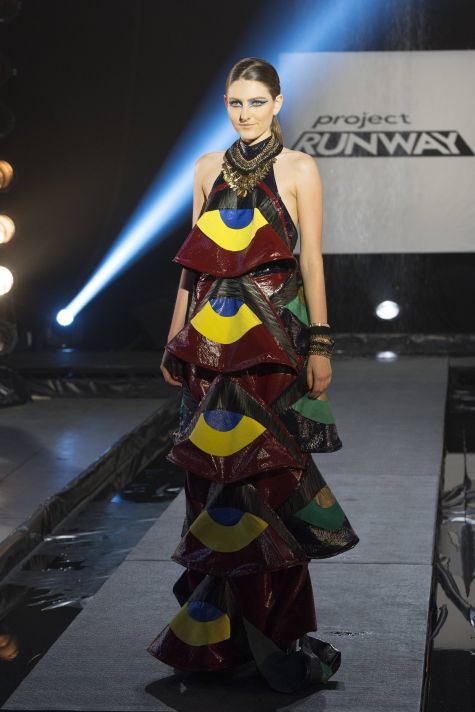 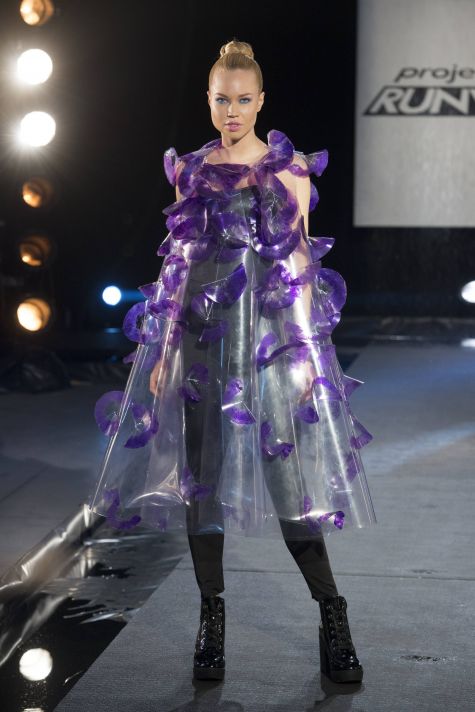 I don’t know how he does it, but Kini’s designs are always so magnificent. I thought this week’s dress was especially chic and dramatic. Plus, it’s usually difficult to make black stand out on the runway, but nothing holds him back. As for Sean, my favorite part about his dress was that he included a waterproof crinoline underneath to shield the model from the dye. What a brilliant idea!

What was your impression of the rainway? Have you ever worked with waterproof materials? If so, for what? Based on her track record, do you think Sandhya will make it to the final three? Please share your thoughts below!

Sean's winning design transformed on the "rainway" from a basic white dress to one with a splash of color.

Fäde's losing design was a bit too literal and didn't incorporate many rain-like components.

Sean's winning design transformed on the "rainway" from a basic white dress to one with a splash of color.