I shared how my fascination with Fortuny fabrics began and wrote about the company’s compelling history. Here’s my latest Fortuny project.

I recently came into another gift of Fortuny fabric (you’ll remember the Fortuny shirt and the fabulous Fortuny coat I previously shared), and decided to make a frock coat. I wanted an embroidered 18th-century-style coat, but made like a jeans jacket. The good people at Penn & Fletcher in Long Island City, New York, kindly allowed me to make use of their computerized embroidery machines to realize my vision.

The first step was to get a working pattern for the coat. I borrowed an 18th-century jacket from Penn & Fletcher, and took a pattern from it. Read more about them here, and here. They had embroidered a set of jackets for a Broadway production of the play Dangerous Liaisons, and were kind enough to lend them to me. 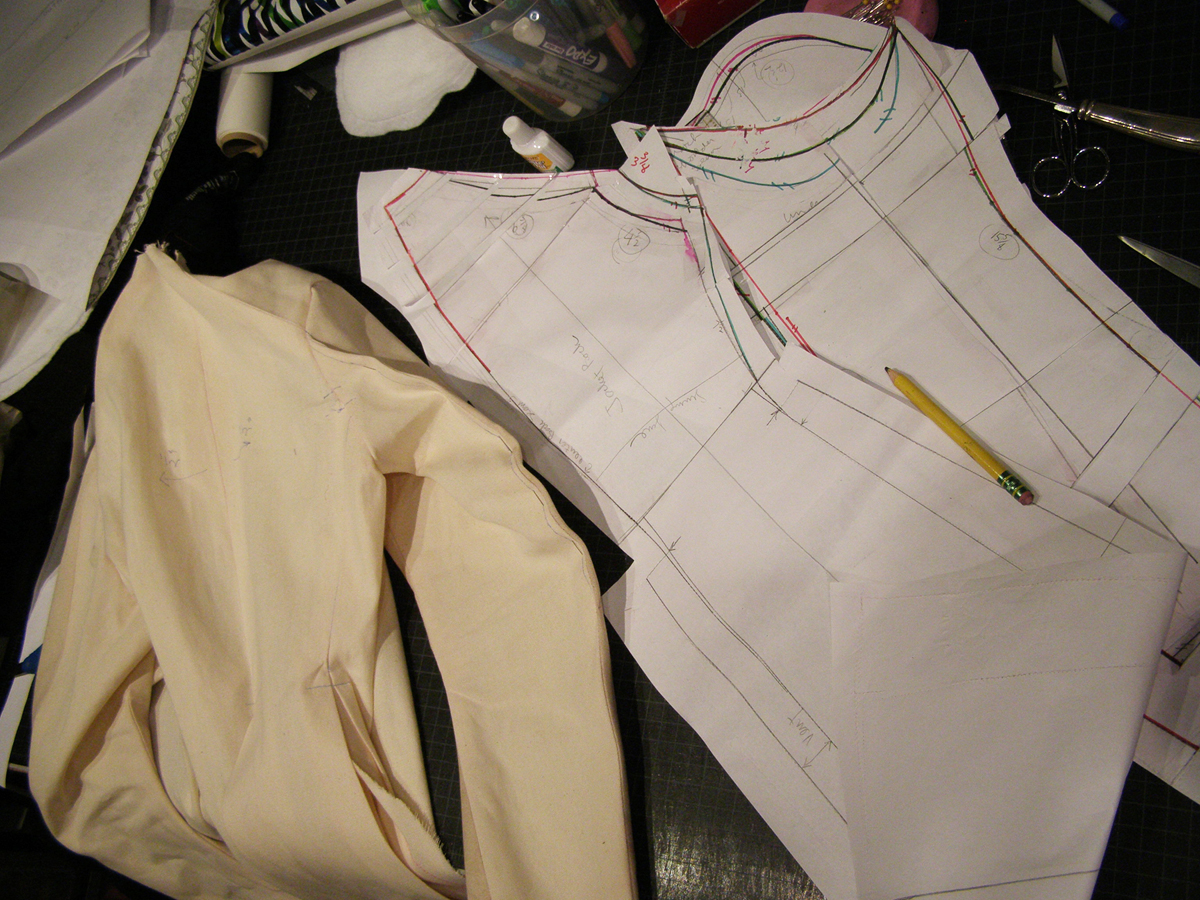 After creating a series of muslins (three in all, so for those who want to avoid that step-DON’T), I got a pattern that fit well and was stylistically correct.

Then, Penn & Fletcher experts scanned the pattern into their embroidery program. They adjusted their house pattern for the Dangerous Liaisons coat to fit my pattern. They printed out the coat fronts, which allowed me to mark my fabric. 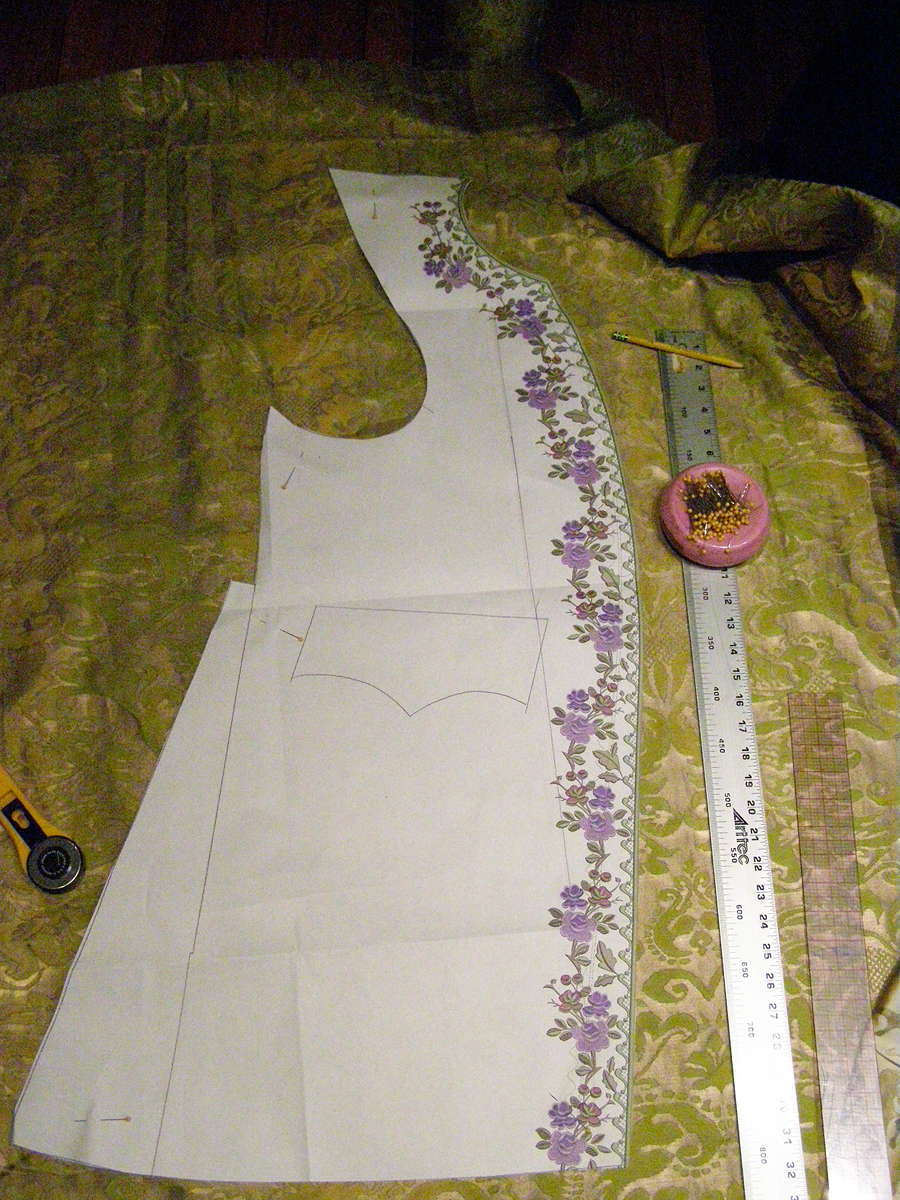 The next step was choosing colors, and stitching out the design. Ernie at Penn & Fletcher put me on the smallest machine and programmed the pocket flap. 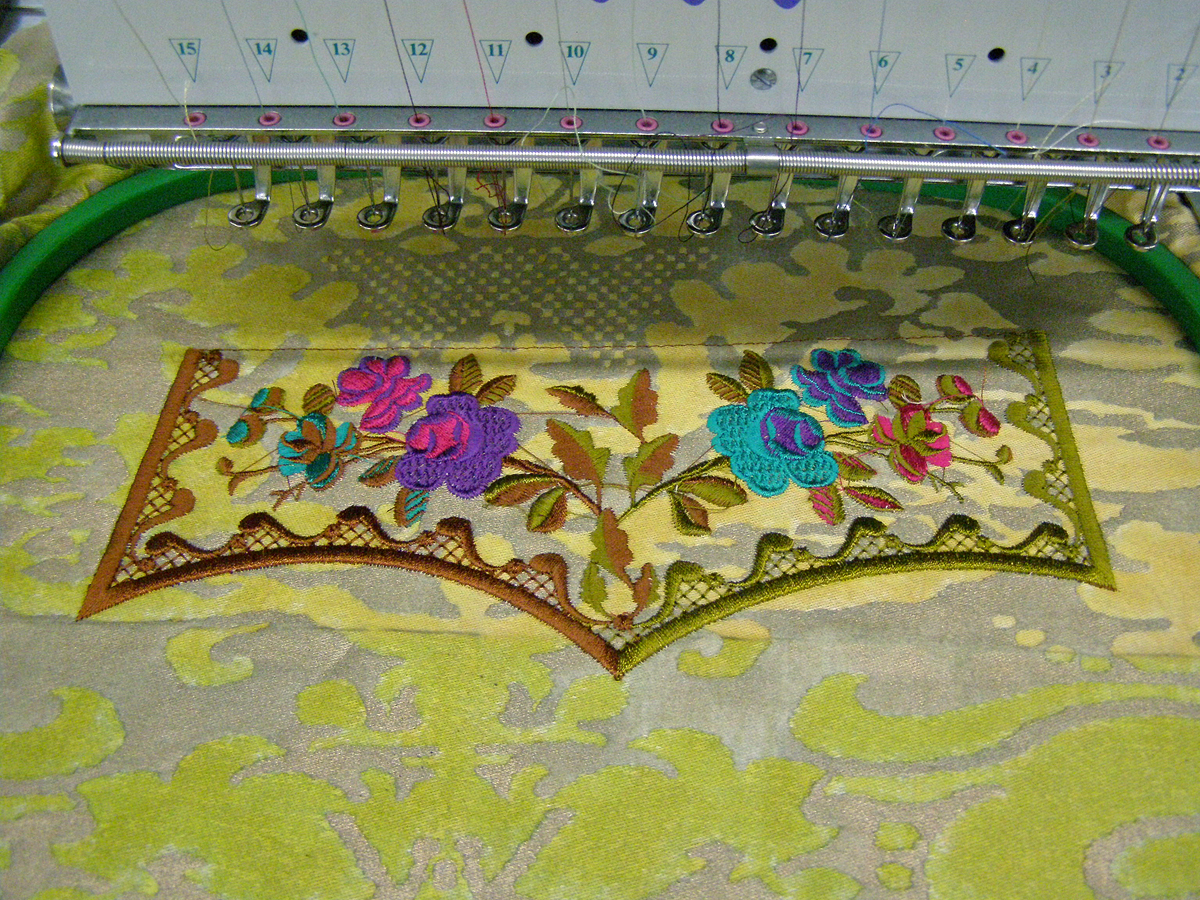 This enabled me to sew out the design in variations of my color choices, to see what I liked best. I ran five combinations by changing the threads in the machine.

Once I chose the color combination, we moved on to the larger machine to sew the fronts. This machine is programmable, and we threaded it with the five colors I chose. Each color has a needle and each needle a number, which aids in programming the machine.

Shown is the printout of the order in which the design was stitched. There were several embroidery layers to the work, to create the dimensional effects of this pattern.

This printout shows what was sewn and when, and that I needed to note which needle would be used for each step of the embroidery. Once this was done, we programmed the needles and mounted the fabric to the frame.

The design stitched out in successive layers. The total stitching time on the machine was 6 hours for each front (12 hours total). 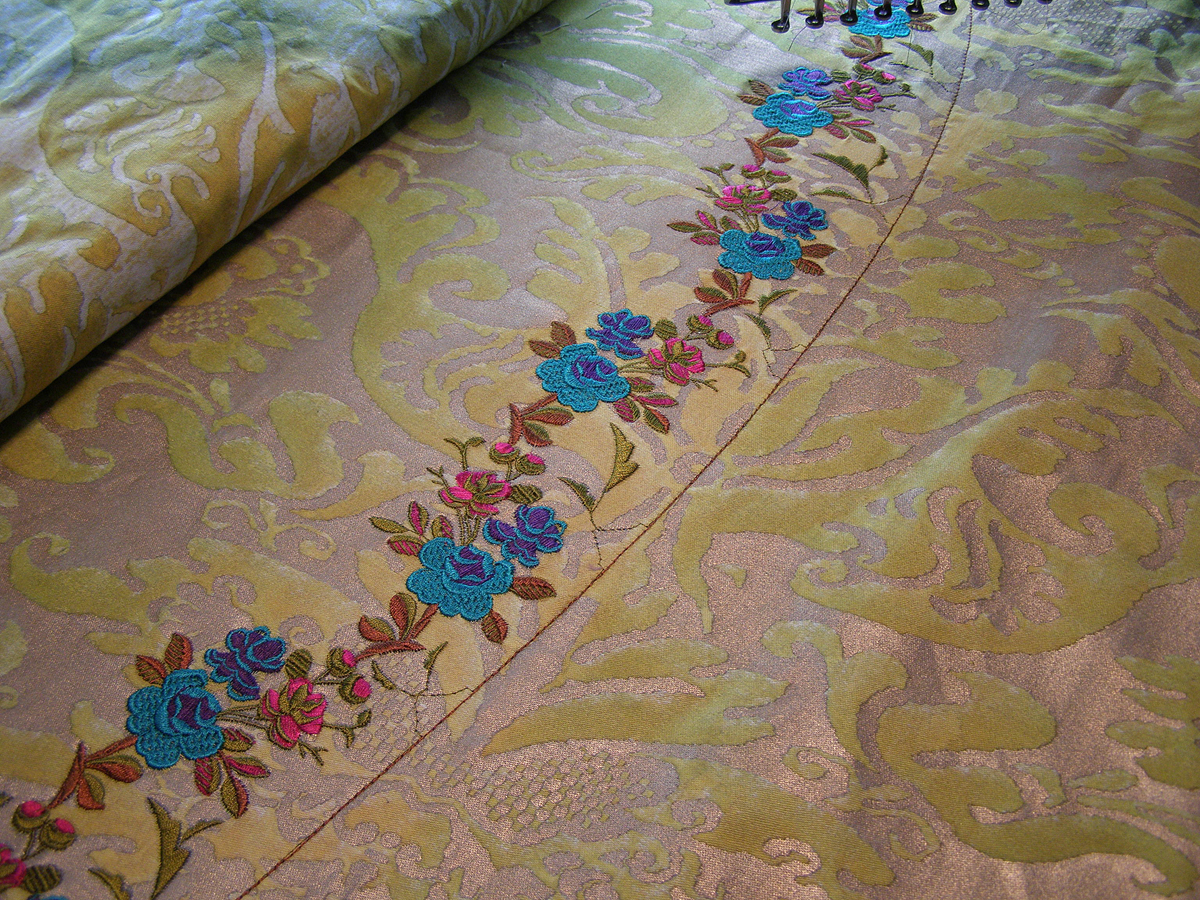 This view shows the work before the border is embroidered.

The other pieces are stitched on the machine in the same manner. 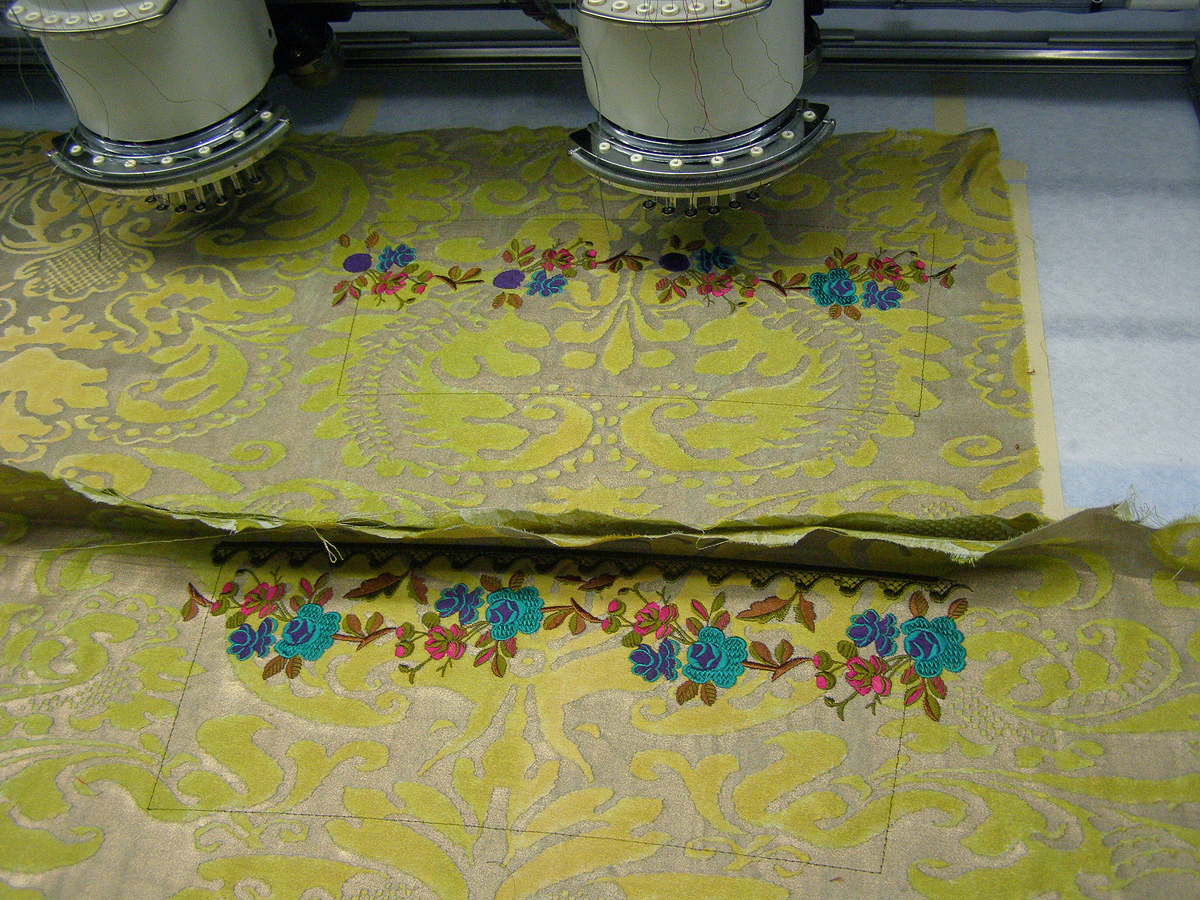 Here are the cuff pieces. There is also a pair of pocket flaps, as well as a collar flap.

Total machine time clocked in at 40 hours, including the sampling.

Once the embroidery was finished, the construction began.

This is the finished collar.

The cuffs needed a bit of care to sew. 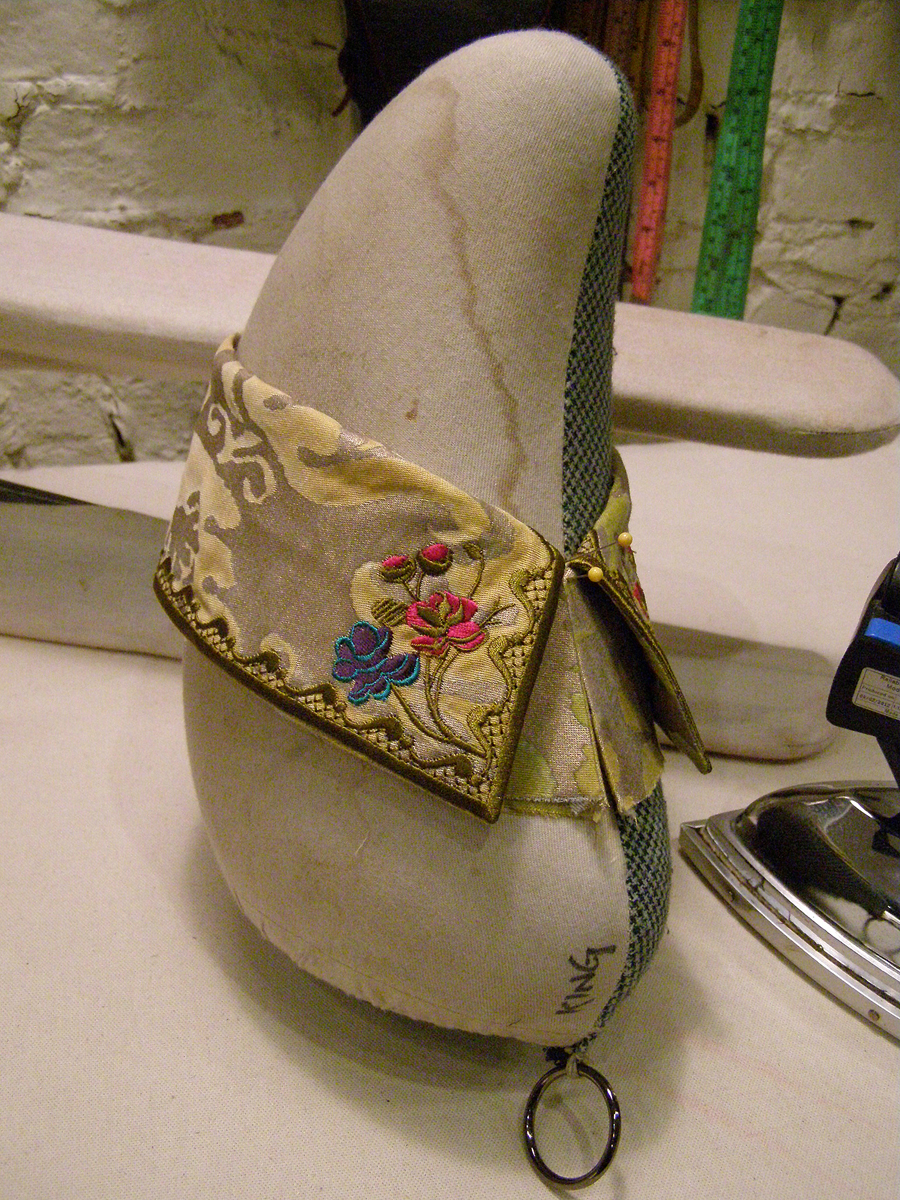 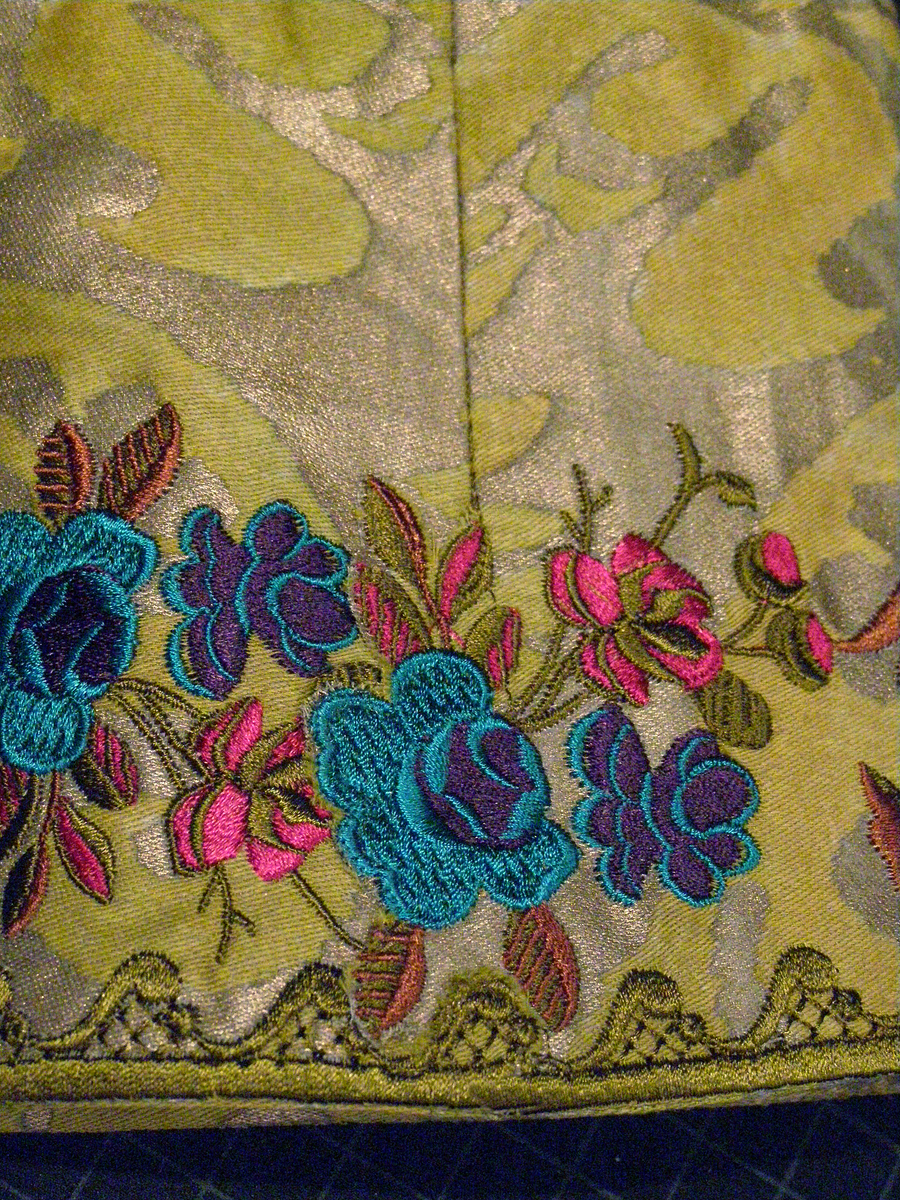 This close-up shows how the seam disappears into the flower. That is because the flower was appliquéd across the seam after the straight seam was sewn. 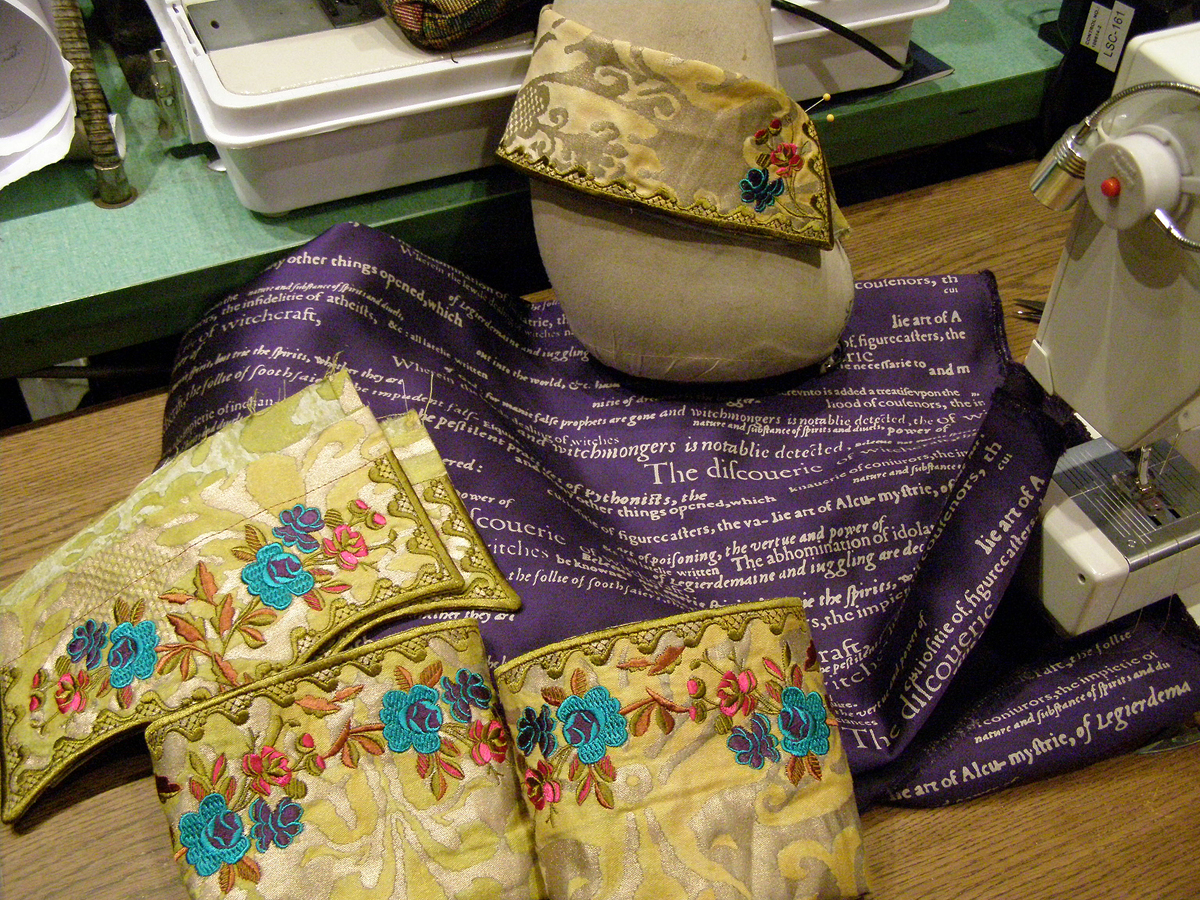 All the small pieces-collar, cuffs, and pocket flaps-were finished and waiting (along with the lining, which is perfect) for the main event. 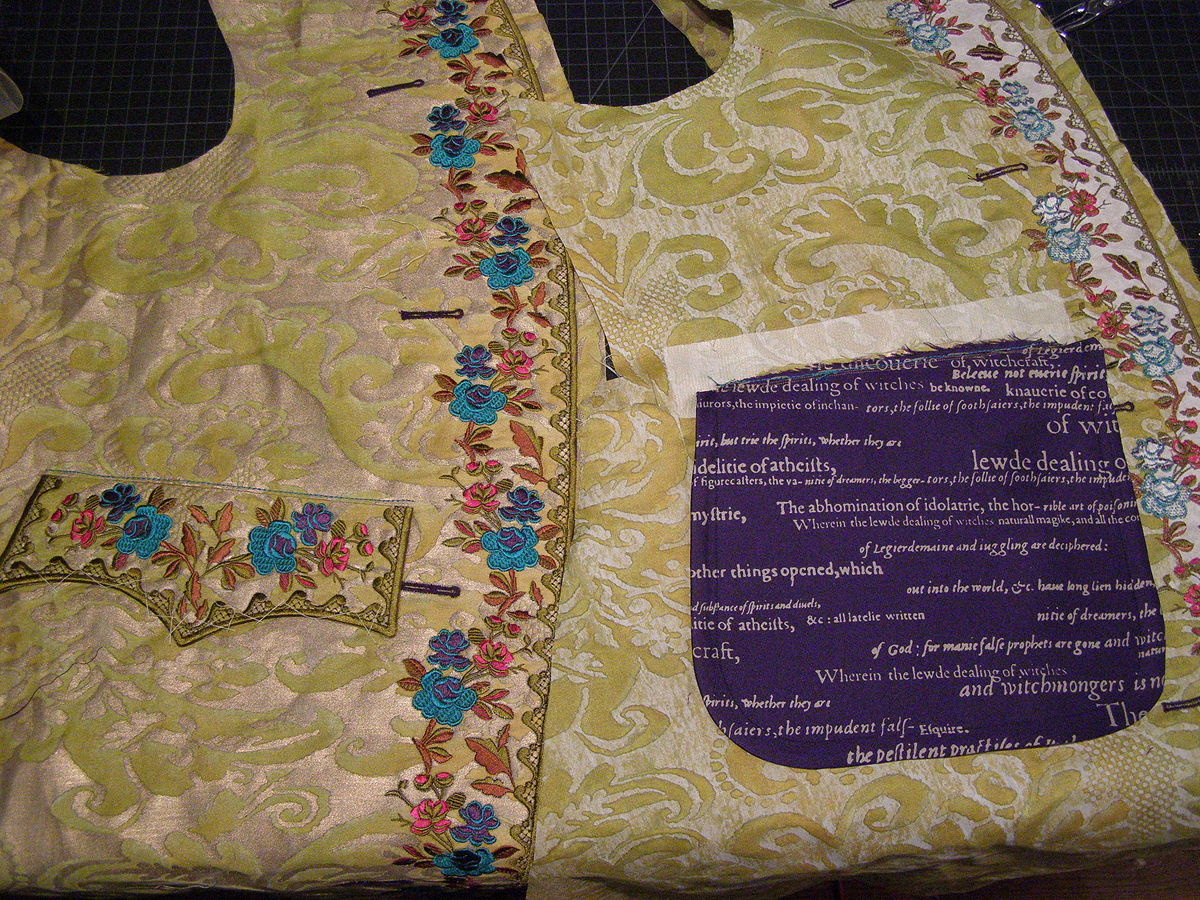 I decided to set the front pocket flaps like upside-down single welt pockets. Since this jacket is unlined, the pocket bags occasionally will be visible. I constructed the pocket so the right side of the fabric showed and used French seams, so the pocket would be finished.

The upper portion of the pockets will be covered by the deep front facing. 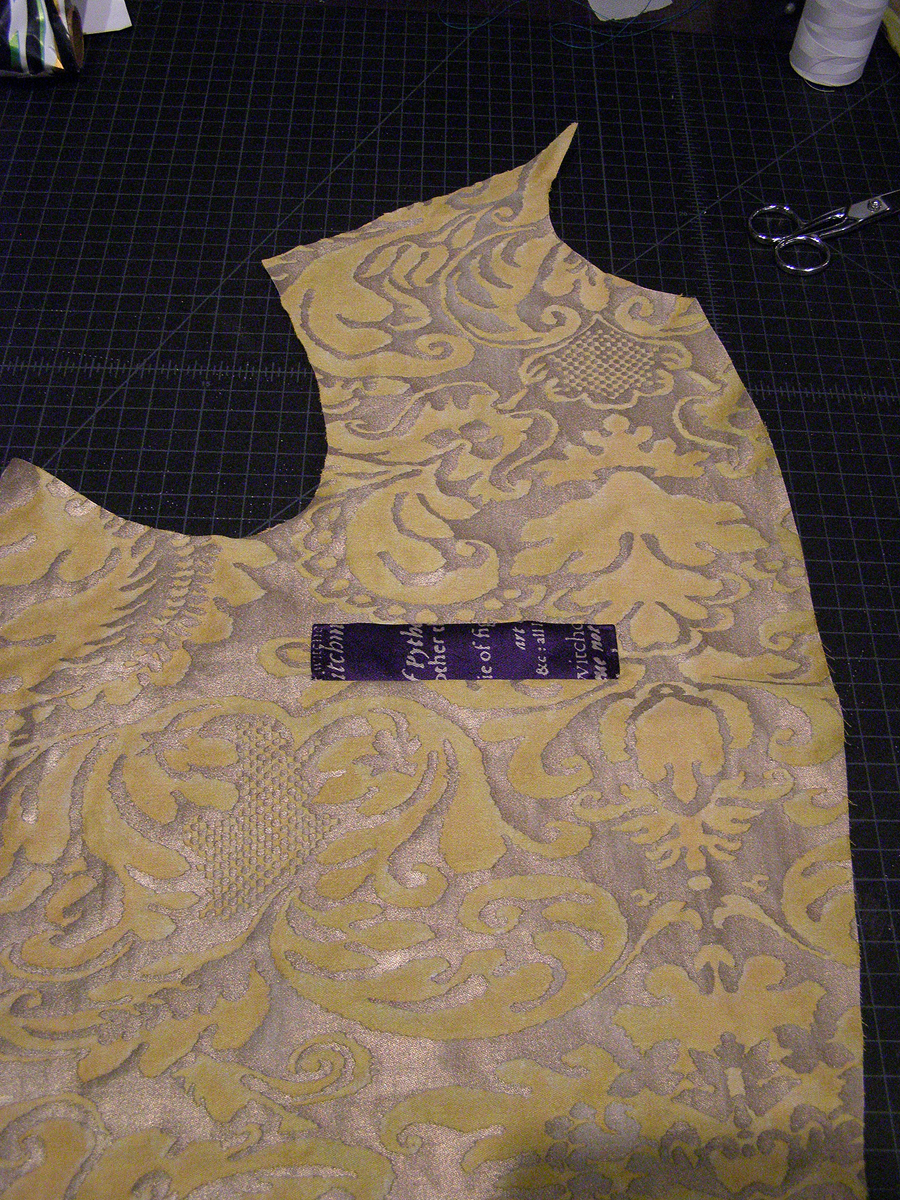 I made a single-welt pocket on the body facing for an inside pocket. This finish consists of a deep facing in the front and a half-lining on the back. After the pocket was installed, I sewed the shoulder seams and side seams and finished the raw edge with a turned topstitched edge.

The sleeves came next. 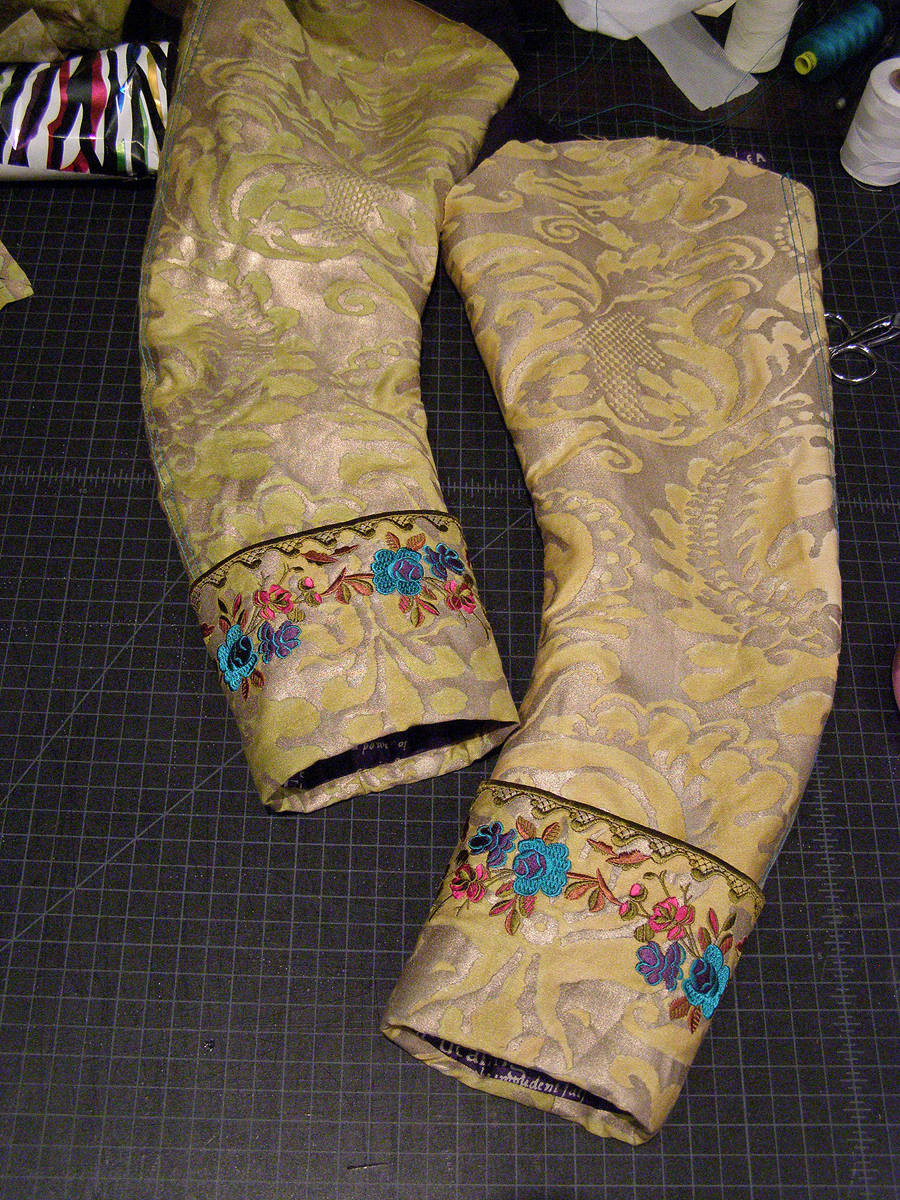 I decided to sew the cuff and the lining to the sleeve in one operation. Later, I hand-finished the sleeve lining at the armhole, like an old-school tailored lining.

After sewing the shoulder and side seams, the collar was installed. The seams were sewn with double topstitching, to mimic jeans construction. 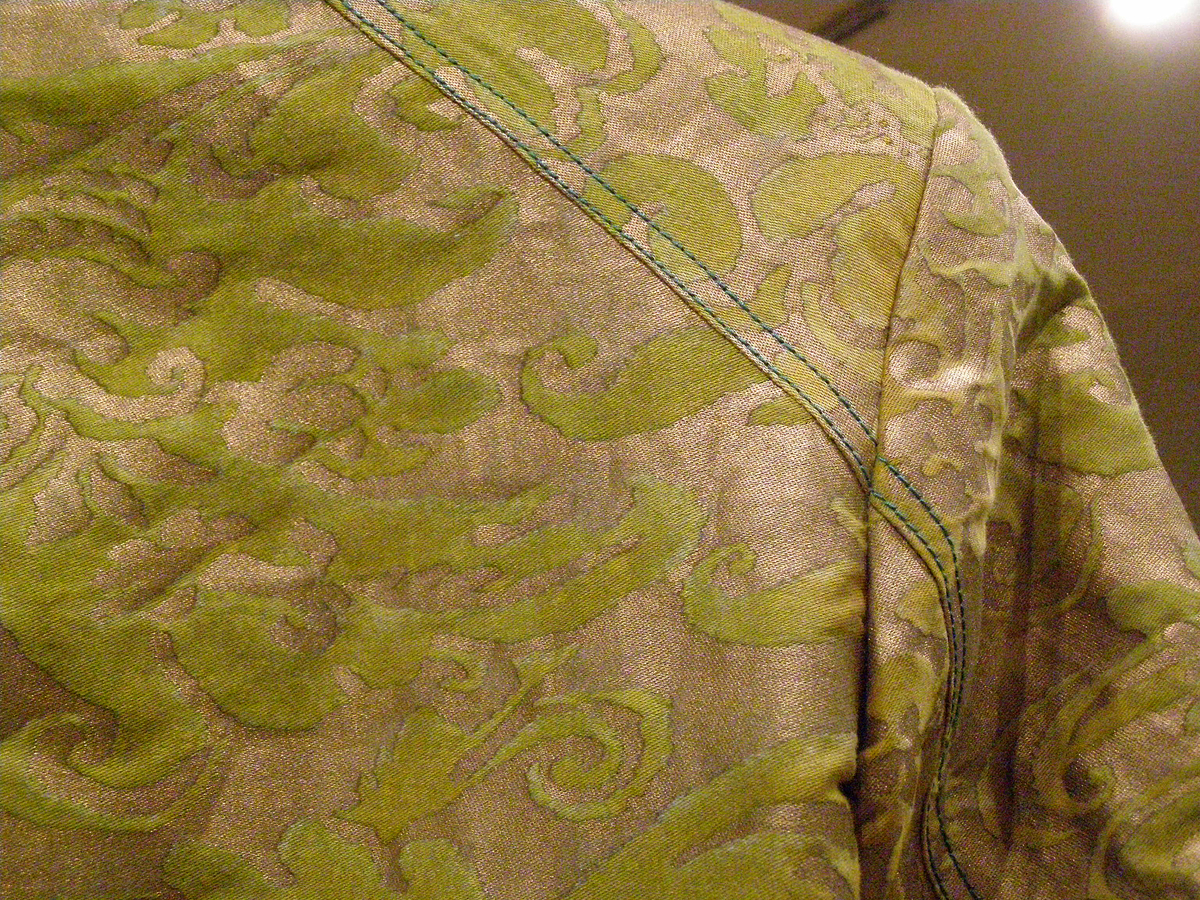 This view shows the work after the sleeve was installed.

Once the collar is installed, the sleeves were set. 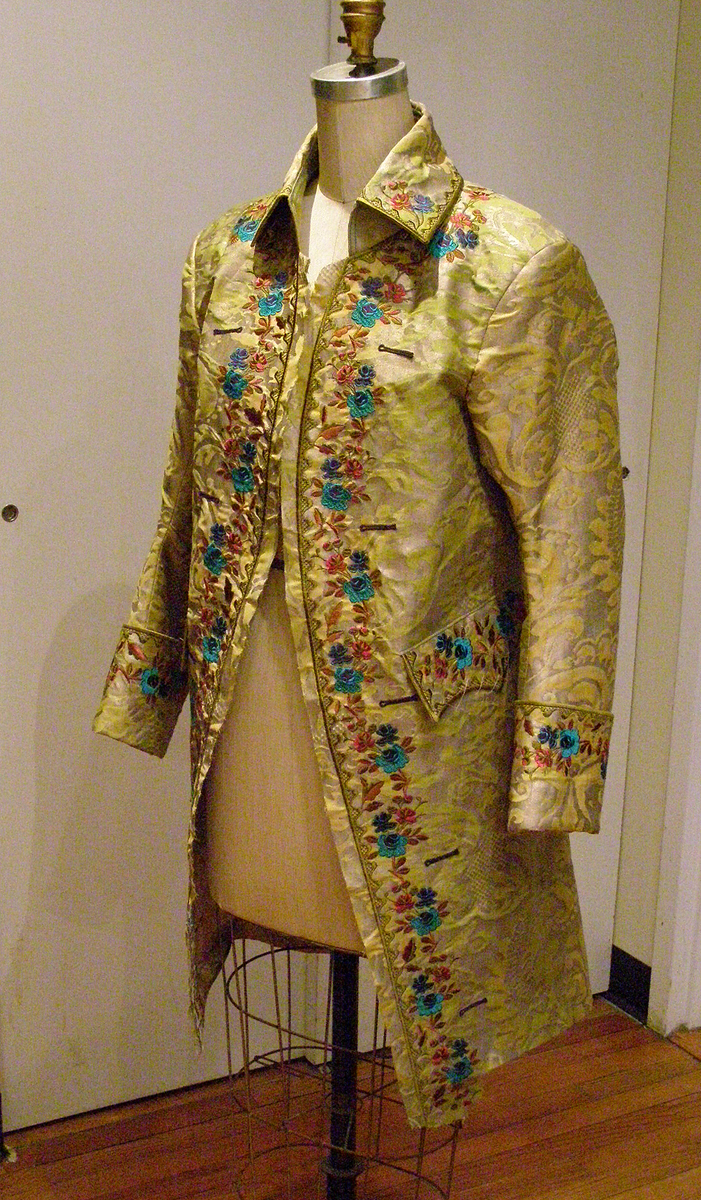 I installed these with a flat shoulder pad (1/4 inch), and a flat sleeve head, to give definition, but not height, to the shoulder. 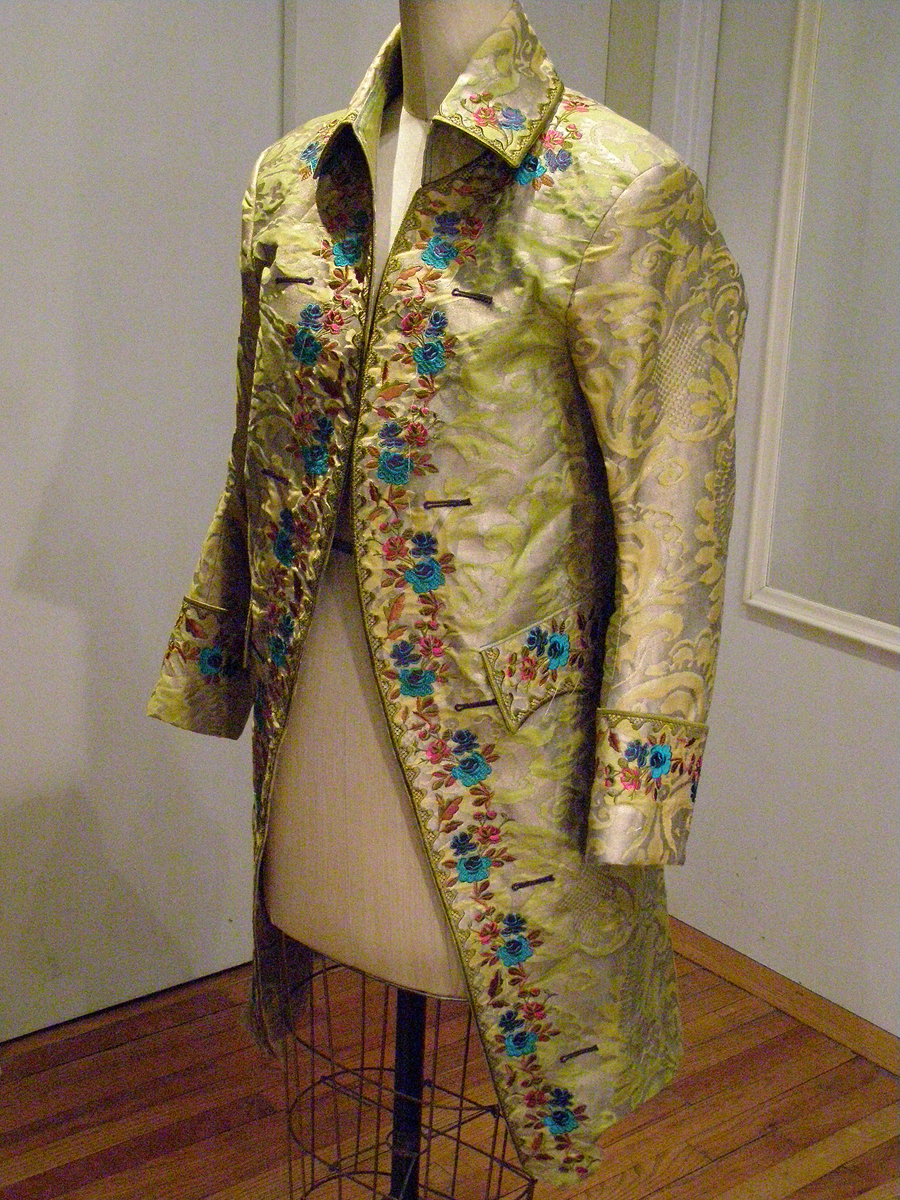 The final step was installing the front facing and finishing work, such as the hem . . .

. . . and the lining. The deep facing and lining were sewn to the body at the armholes. To finish, the sleeve linings were fell-stitched to the body lining along the armhole seams. 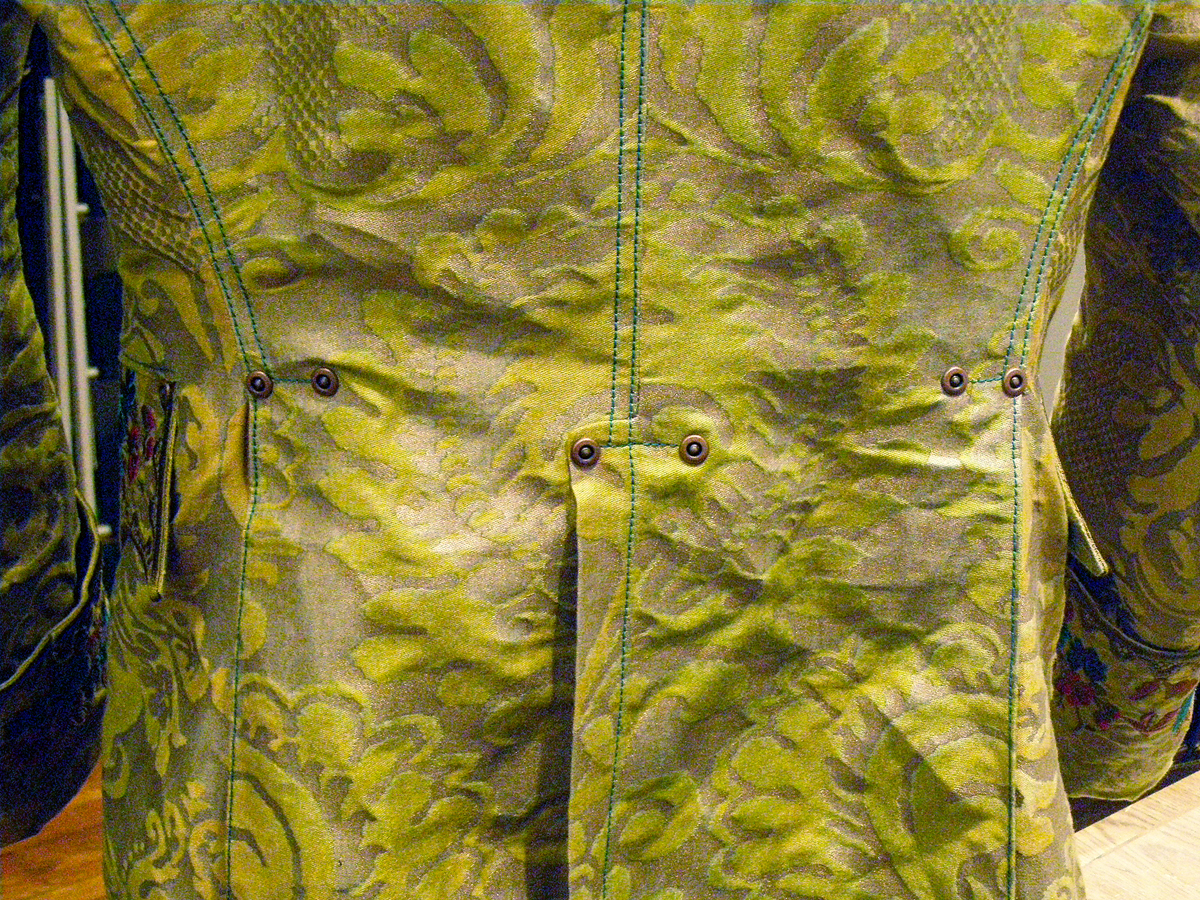 In keeping with the jeans-construction idea, topstitching at the ends of the vents at the waist was reinforced with rivets, as well.

Here I am wearing the Fortuny frock coat! I paired it with the slashed jeans I demonstrated how to make in a previous tutorial. 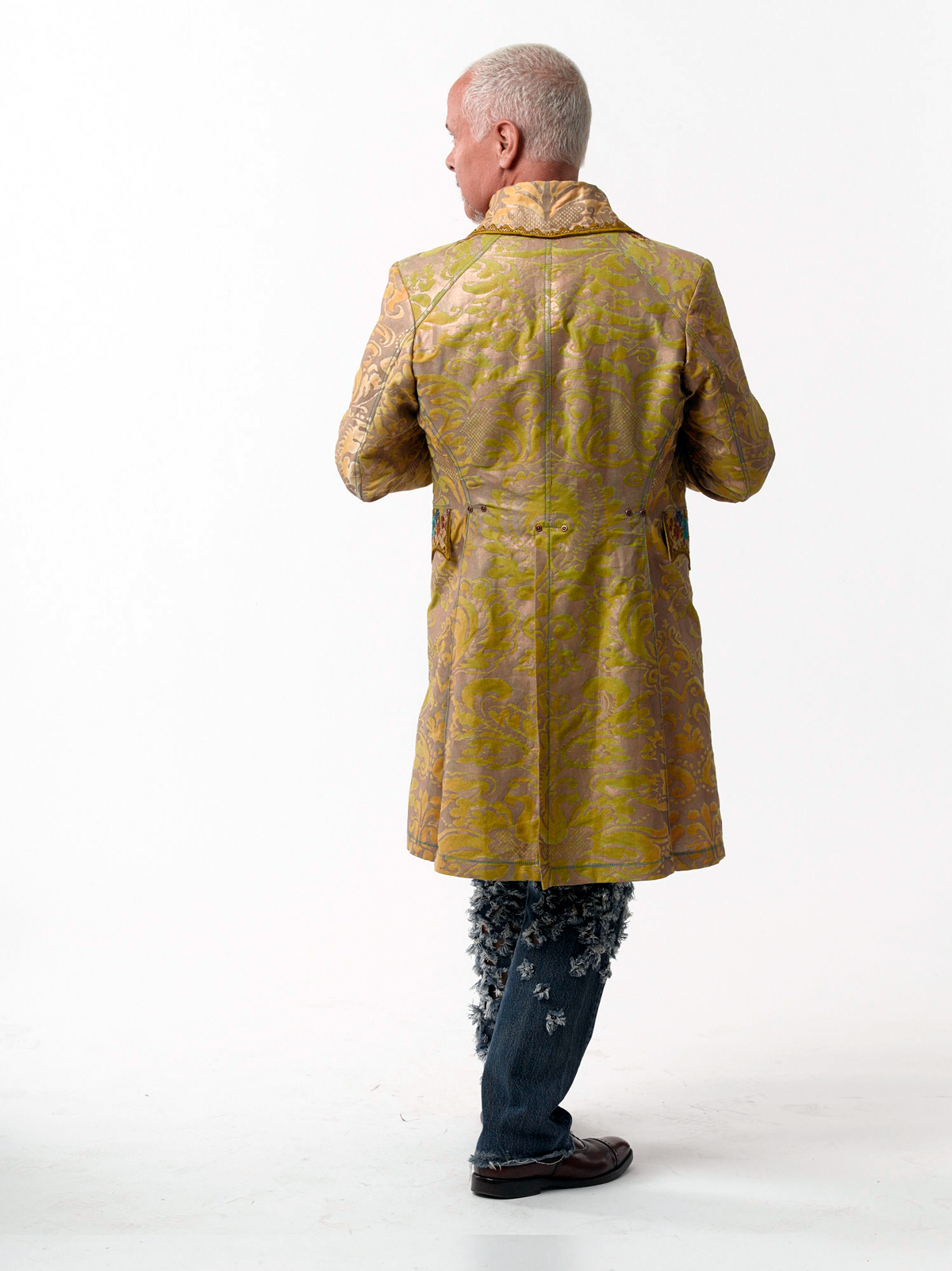 And here is a back view of the finished coat.

What do you think of this embroidered coat? Do you utilize embrodery in your projects? Do you own Fortuny fabric? If so, what do you plan to create with it?