With only five designers remaining, the competition on Project Runway is really taking shape. Episode 11 paid homage to the place it calls home-–New York City. In the opening scene, mentor Tim Gunn rounded up the designers in front of the Queensboro Bridge to explain the next challenge. This week, they would need to create avant-garde looks inspired by some of the Big Apple’s most iconic bridges-–the Manhattan Bridge, Brooklyn Bridge, and the aforementioned Queensboro Bridge.

As the winner of the last challenge, Kelly Dempsey was given first dibs, and she opted for the Brooklyn Bridge. Ashley Tipson and Edmond Newton were assigned the Manhattan Bridge, and Marlene Labissiere and Candice Couco received the Queensboro Bridge. Tim went on to explain that avant-garde looks typically feature multidimensional designs and elements. Therefore, the designers would be given the opportunity to use 3-D printers to help create their looks. This was a Project Runway first. How does it work, you ask?

With the help of Annie Shaw, creative director at 3D Systems, and her team, the designers learned how to use 3-D printers to turn their sketches into three-dimensional textiles. This is the process: Sketches are transformed into 3-D files; mesh fabric and colors are then selected; the “prints” come out in 5-1/2-inch squares. As a bonus, the winner of this challenge got to take home a Cube 3-D printer and all its accessories.

“This is the best work you’ve done all season!”

After sketching on the site of their respective bridges and making a successful shopping trip to Mood Designer Fabrics, the designers headed to the workroom. Merline, Candice, and Edmond appeared to have a definite vision for their designs. Kelly’s was a bit on the literal side, and Ashley’s pant ensemble seemed to lack cohesion. After the “Tim Gunn inspection” however, it became clear that Merline didn’t have a defined concept for her look. In contrast, Kelly’s more literal interpretation was what Tim described as “fun.”

Before heading out, Tim gave the group encouraging words. “This is the best work you’ve done all season,” he said. The contestants were thrilled to hear his boost of confidence. 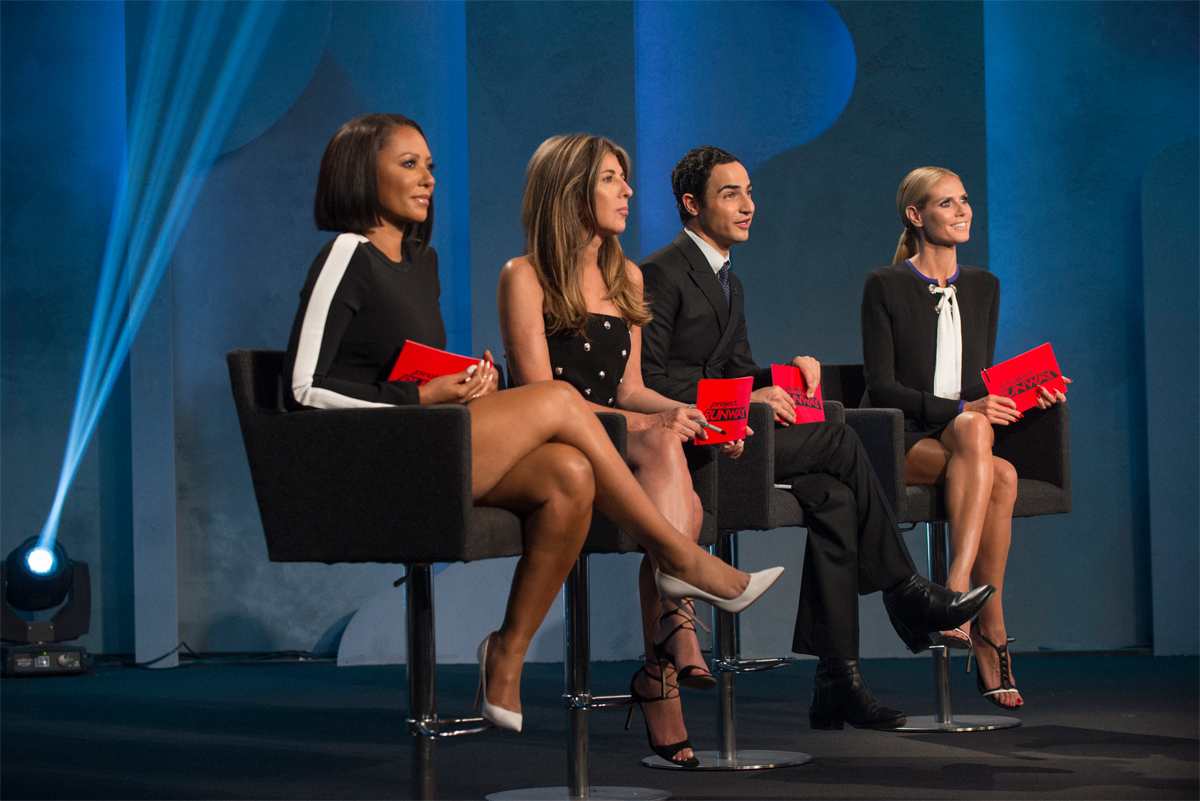 Kelly Dempsey’s risky look got her back-to-back victories! Nina appreciated Kelly’s interpretation of the Brooklyn Bridge and said she thought Kelly created a piece worthy of the avant-garde label. Zac made note that she ” . . . played with suspension [cables] well and with form” and said he was proud of her. I think the judges clearly made the right decision: Kelly’s design was the most literal of the bunch, but its execution was innovative and creative. Isn’t that what avant-garde is about? 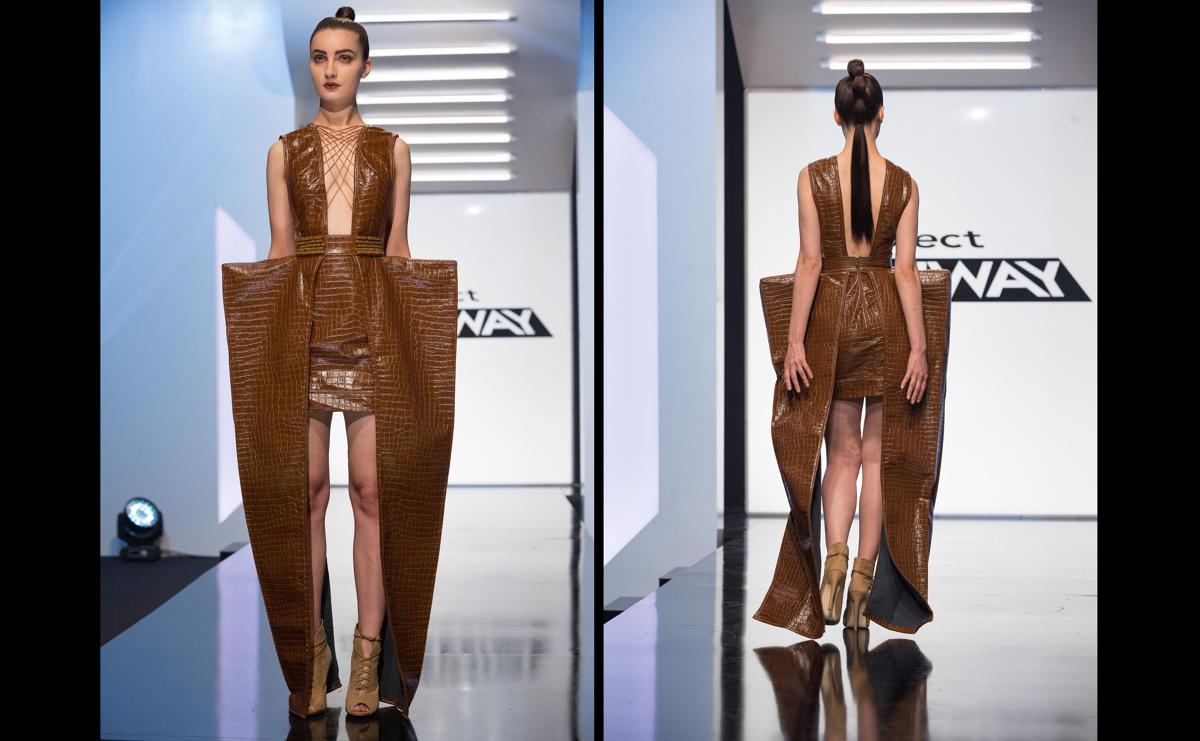 Candice Couco’s Queensboro Bridge-inspired look brought home a victory. Nina rightly pointed out that the look, from head to toe, seemed Spanish inspired rather than Queensboro Bridge inspired, and didn’t cross into the avant-garde realm. However, Zac said that her application of the 3-D printouts was the best. While the gown wasn’t truly avant-garde, it was impeccably made. Mel B. loved it so much she asked Candice if she could wear it to an upcoming red-carpet event. That’s a win by any standards! 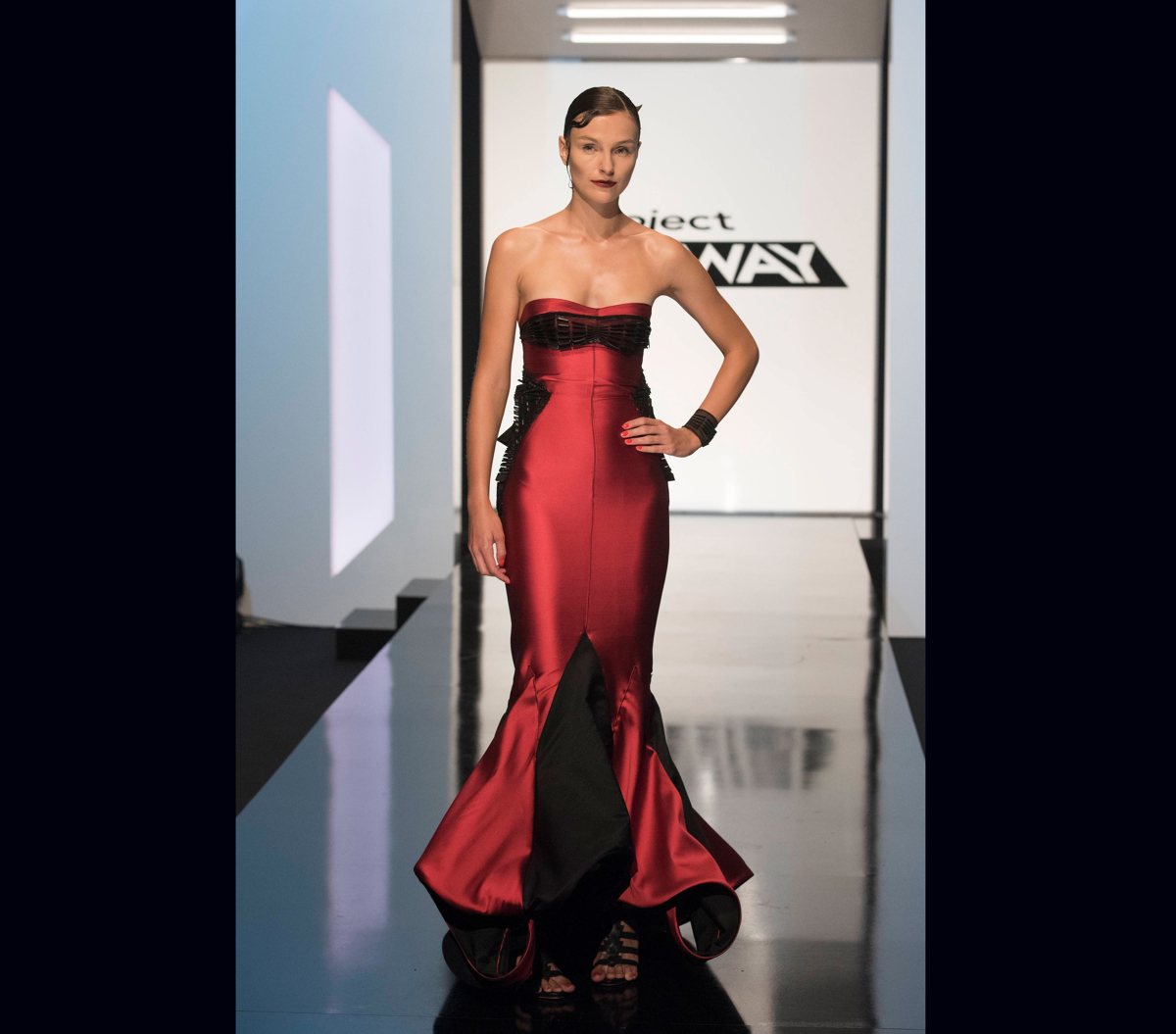 Edmond Newton’s design wowed Heidi and Mel B., prompting them to say that they both would like to wear it. However, Zac and Nina didn’t think the dress was as avant-garde as they had hoped. 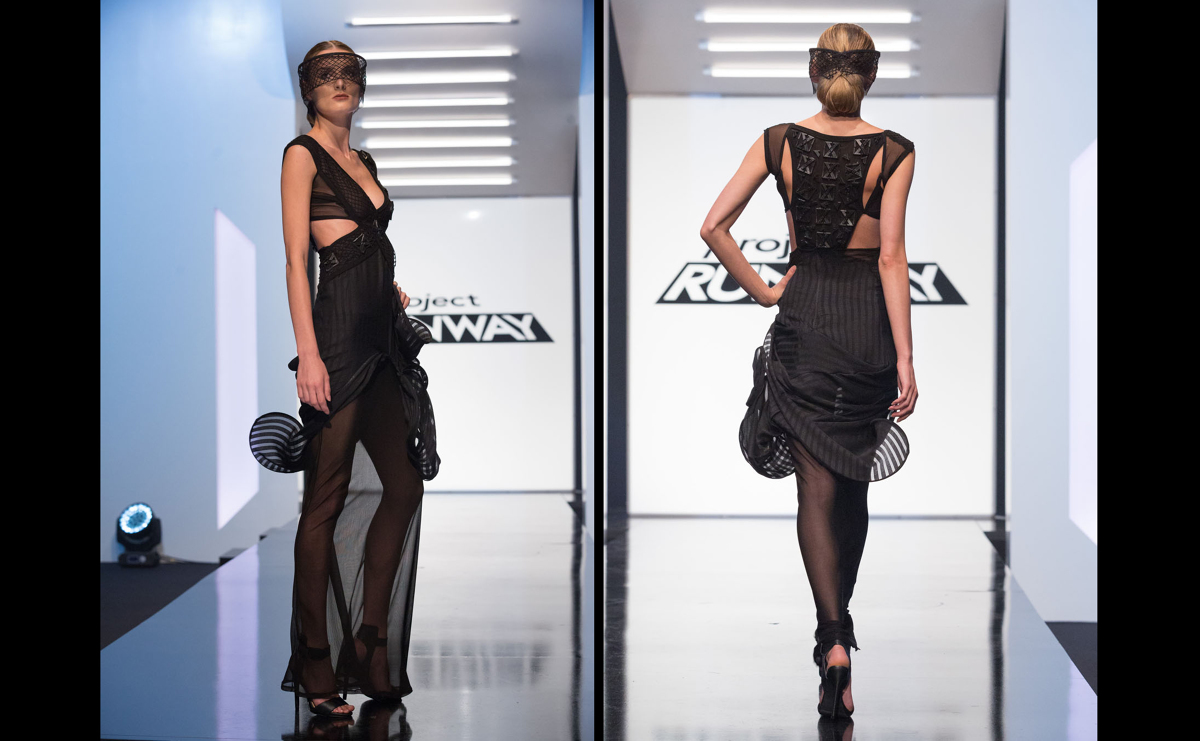 Marlene Labissiere’s avant-garde look was her final for the season. I think she missed the mark on the placement of the 3-D printouts. I also was not a fan of the styling: The model’s hair should have been pulled up or back so you could see the 3-D printouts at the shoulder. Heidi liked the silhouette but said she felt it wasn’t as impressive as the other runway looks. Nina and Zac expressed similar feelings. Mel B., on the other hand, liked the dress. 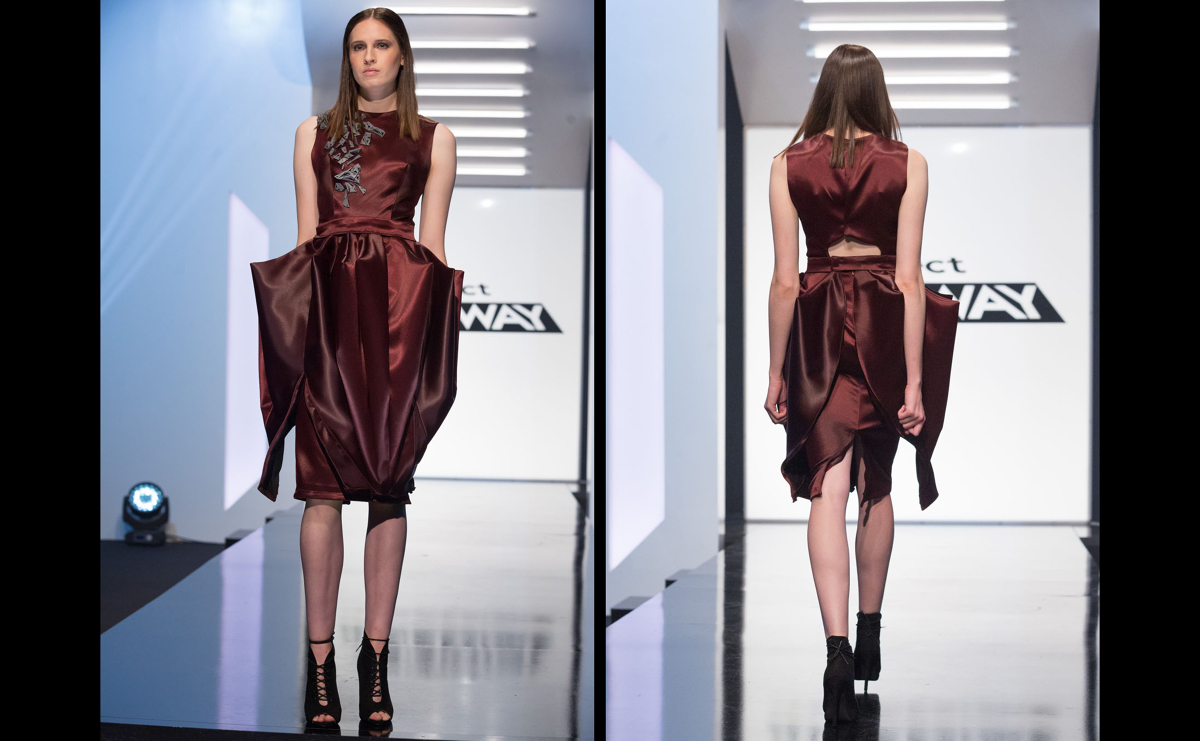 Ashley Tipson’s pant and cape ensemble certainly made an impression on the runway. “Drama baby,” Heidi exclaimed. Nina liked it very much, too, but said she didn’t understand the connection between the design and the bridge. In general, all four judges liked the crop top and pant ensemble and thought Ashley stepped up her game. 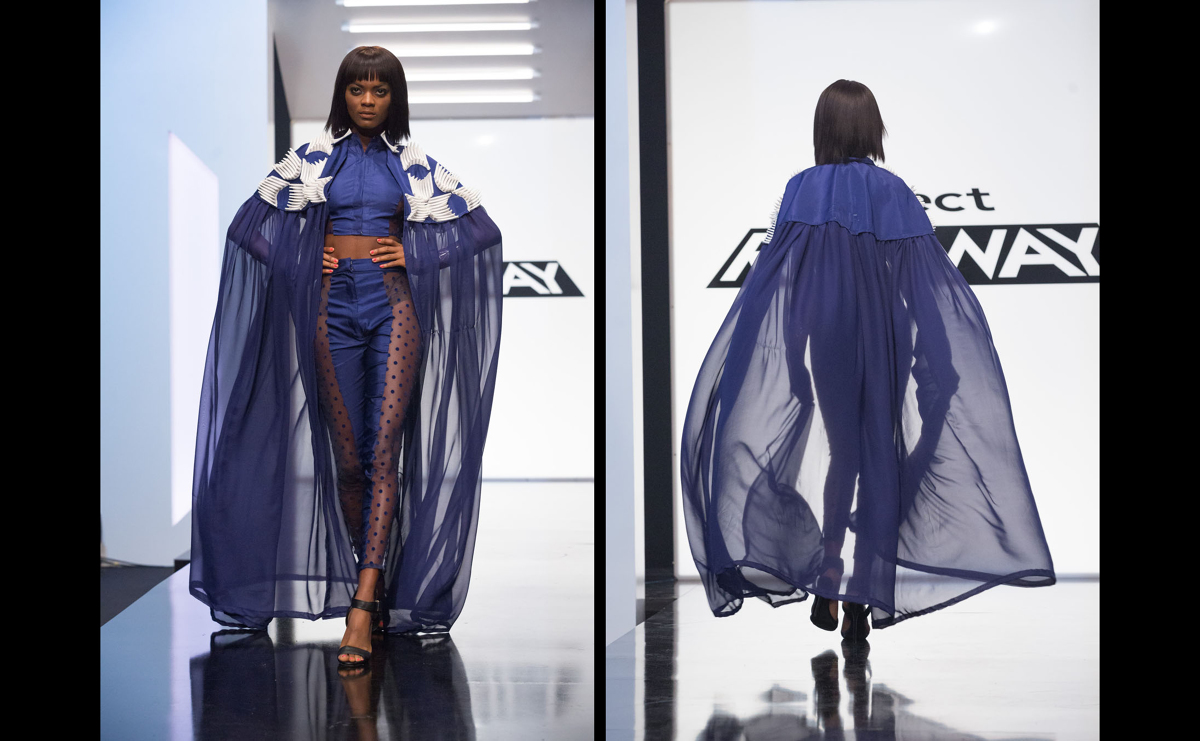 Will Tim Gunn ever use his “Tim Gunn save”? Do you think the judges got it right? How would you have designed an avant-garde look for this challenge? What do you think about 3-D printing as it relates to fashion? Share your thoughts by leaving a comment.

Kelly Dempsey sketchs her design near the Brookly Bridge.

The final five designers learn about their challenge by the Queensboro Bridge in New York City.

Candice working on her design.