Project Runway All Stars: Season 5, Episode 8 – “Once Upon A Runway”

Broadway star Laura Michelle Kelly helped kick off this episode. Currently a cast member in Finding Neverland, she told the Project Runway contestants, who had gathered at The Drama Book Shop in New York City, how immersive fiction can be. Host Alyssa Milano reminded the contestants the importance of drama and literature as design inspiration. 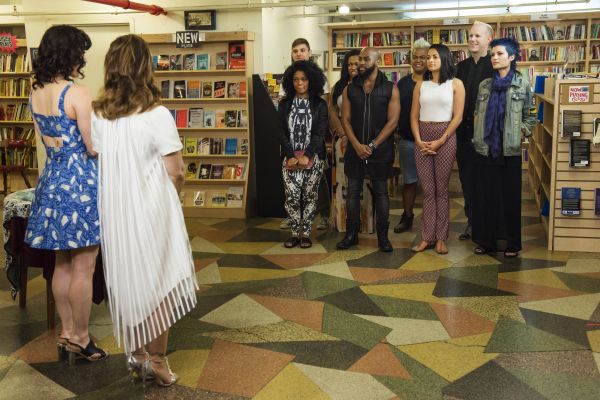 Alyssa then gave the designers their task for the week: Create a modern outfit for a female character from a classic work of children’s literature. They were told to refer to the characters’ “backstory,” rather than the Disney-fied version. This interesting twist mostly got lost during the challenge, because there were plenty of painfully obvious Disney-inspired details in the finished pieces. Just for fun, we’ve assigned a “Disney score” for each look, based on how apparent the Disney inspiration was.

The designers got going with the challenge after each was assigned a character and granted a $200 budget and one day in the workroom.

Mentor Zanna Roberts Rassi warned the contestants in the workroom to keep their designs as contemporary as possible, even though their assigned characters were Disney classics. She said the judges wanted a modern-day look. 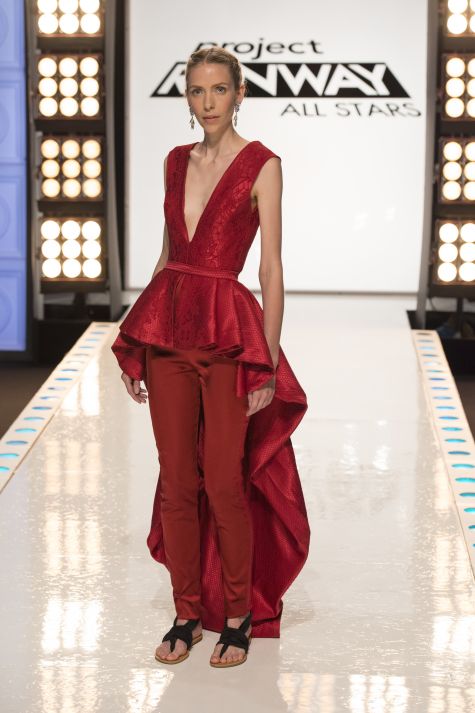 Asha won this week’s challenge with her interpretation of Rapunzel. The train was flowy and, surprisingly, did not look heavy. The judges agreed that the train reminded them of Rapunzel’s long hair, and they praised Asha’s shoe choice. I thought the shoes looked out of place, however. Asha’s skirted jumpsuit was on trend, well made, and, most importantly, a clever interpretation of the fairy-tale character. Disney score: 0/5 (That is, no obvious Disney inspiration. Congratulations, Asha!). 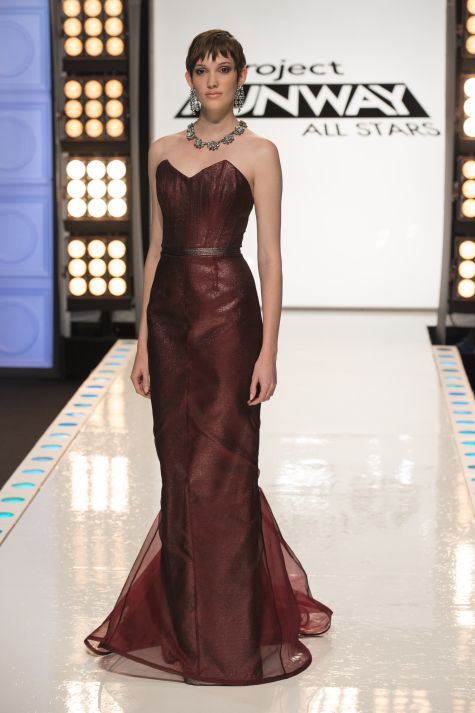 Alexander was assigned Cinderella. The lack of Cinderella’s essence was ultimately his downfall. Cinderella is young, and the judges said this gown was too “old.” In fact, judge Georgina Chapman said the dress looked more like it was meant for Cinderella’s evil stepmother. Alexander is a great designer but, week after week, the judges chastised him for his overly mature design. Unfortunately, he never made his designs any younger, and the judges saw that. Disney score: 0/5 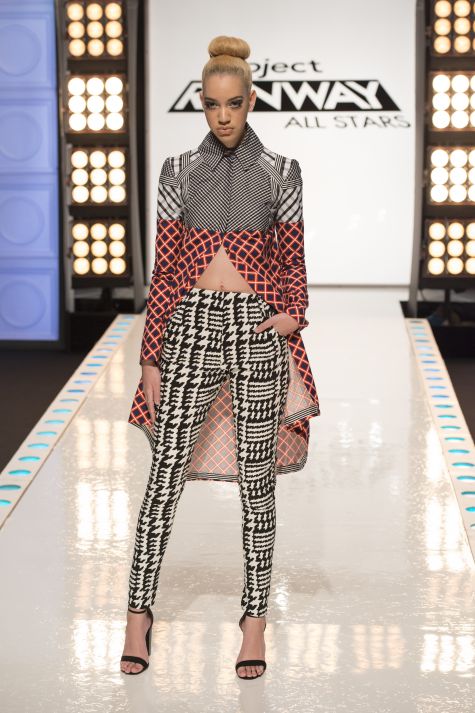 Dom designed a modern look for Tinkerbell. The character description Dom was given said that the pixie was sassy and adventurous. Though this is the last thing I expected, the design works well. The back has two cutouts where her wings would be, and a long back on the blouse to represent wings. Judges praised Don’s small details, the fit of the pants, and the trendiness of the overall design. Disney score: 0/5 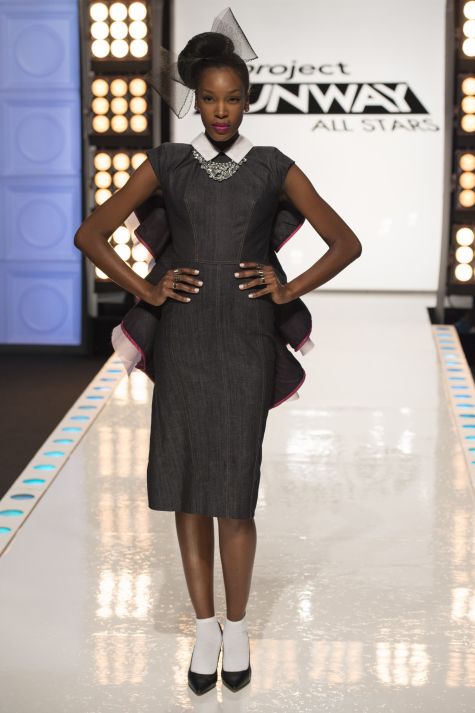 Kini designed for Alice from Alice in Wonderland. This unique design instantly reminded me of Alice. The back, with its massively oversized ruffle detail, was unusual but not in a bad way. Somehow, Kini made this look work. The dress is like a mullet: Business in the front and party in the back. The white collar received high praise from the judges. I’m glad to see Kini at the top. Disney score: 2.5/5 (Collar, bow, girlish shoe and sock combo.) 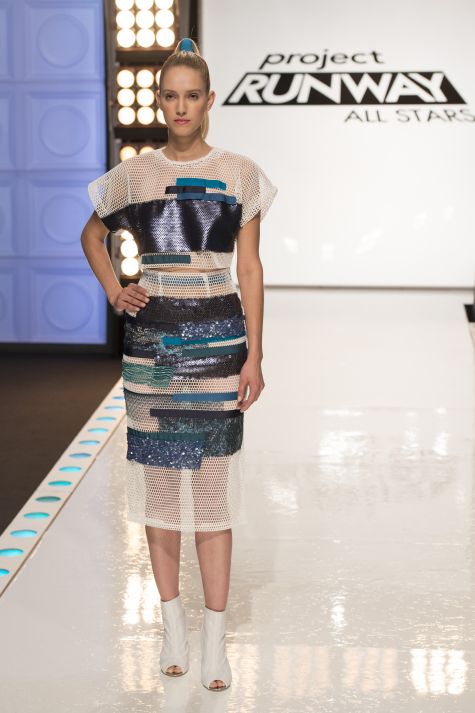 Sam’s design was inspired by the Little Mermaid. I admit, the judges’ favoritism toward Sam confuses me. Despite his subpar design skills, he has won several challenges. There are other designers in the competition who work harder and have more knowledge, yet Sam always manages to land in the top. Yes, reality television thrives on drama, and Sam provides that. Well, the drama intensified this week: The judges finally reprimanded him for his shoddy work and gave him low scores. It’s interesting that Stella was kicked out of the competition for a very similar design. Sam is skating on thin ice, and this might be the first sign that the ice is cracking. Disney score: 0/5 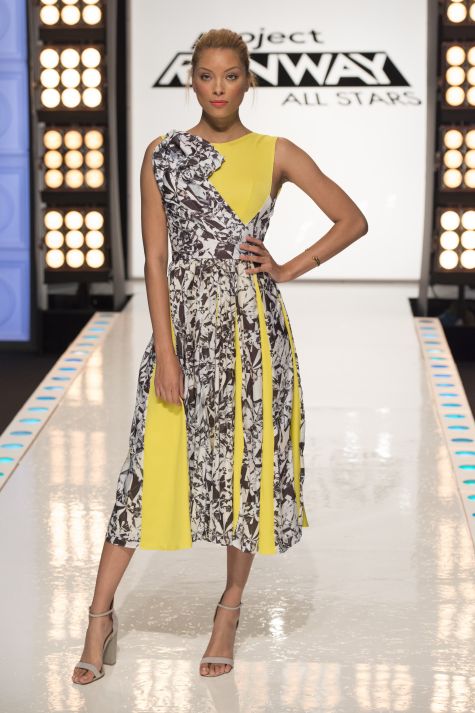 Layana’s challenge was to make a modern design for Beauty in Beauty and the Beast. The judges’biggest criticism was that the cut of the dress was too old. The judges said the dress was pretty but not “fashion.” I am surprised Layana made it through this week. She has been in the bottom three times already and is still making the same errors. She really needs to step things up or she may meet her last day in the competition soon. Disney score: 3/5 (Color, silhouette, neckline.) 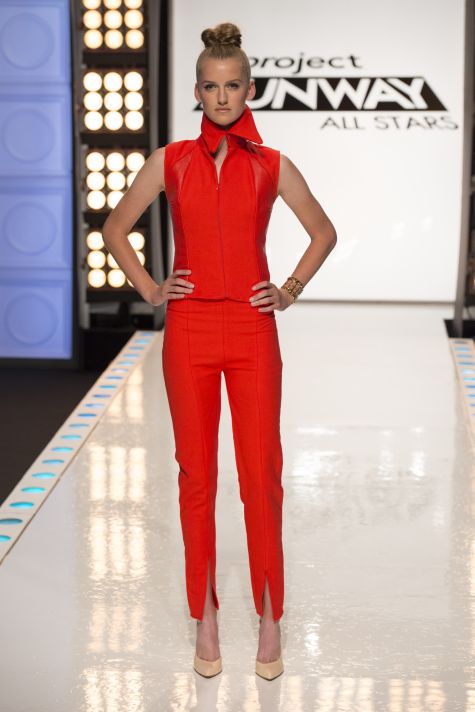 Ken chose to do something safe for his Snow White character, and that may have been the best decision. The designers had no complaints about this pants suit, and the collar made it interesting enough for Ken to get away with a simple design. The collar mimicked the typical standing white collar shown on Snow White’s gown. Disney score: 3/5 (The collar is obviously a Disney derivative, but as it’s the only truly distinctive part of the look, it carries extra weight. This wouldn’t be Snow White without it.) 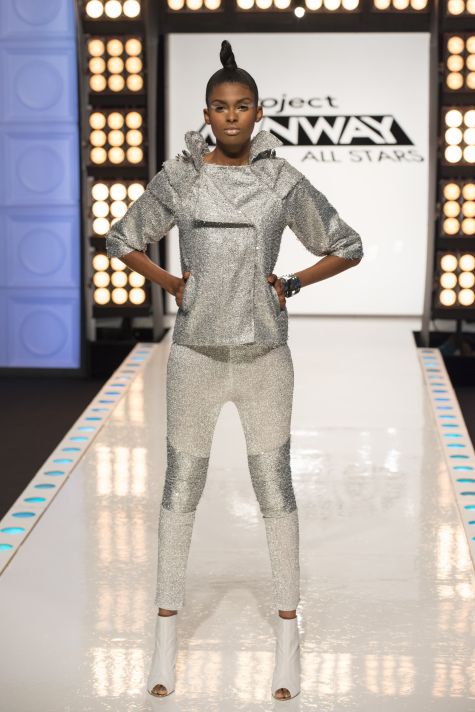 Emily was assigned the Snow Queen. I really liked his futuristic design and color scheme. I have never seen anything quite like the edgy jacket. Emily created something different while staying true to her assigned character. Disney score: 0/5

Do you agree with the judges decision to get rid of Alexander, or do you think there is someone else who should have been eliminated this week? Leave a comment below to let us know! Remember to tune into Project Runway All Stars  at 9/8 central time every Thursday night on Lifetime.

Contestant Alexander works on his design.