Project Runway All Stars: Season 5, Episode 10 – “Rebel with a Cause”

This season is flying by, and with only six designers left, the countdown to the finale is on. This week, the contestants were asked to design a look for a modern, sophisticated, strong woman who wants to dress well and give back. With $250 apiece and a day to design, our intrepid competitors are hoping to win the chance to design and sell an ensemble through n:PHILANTHROPY, a women’s fashion line that donates part of its proceeds to pediatric cancer research through Children’s Hospital Los Angeles. Everyone’s onboard with tha. After all, it’s hard to argue with fashion for a good cause. Dom has a background in cancer research, so she’s particularly inspired.

The problem with this challenge, from my point of view, was the endless insistence on the notion that the woman who wears n:PHILANTHROPY outfits must be “bad-a**.” I don’t see that as a requirement for caring about fashion or for wanting to support worthy causes, and because the term is so poorly defined, the designers had little guidance. The company’s founder, Yvonne Niami, showed up in a black pleather dress with fringe, so that might have been a clue . . . but it’s not much to go on. This meant, further, that the judges had free rein later to be as arbitrary as they liked when evaluating the finished looks. It would have made more sense to offer the designers a look book from n:PHILANTHROPY as reference. As it turned out, this week’s winning look was a good fit for the brand, but it was only by sheer luck that any of the designers met the unstated criteria. 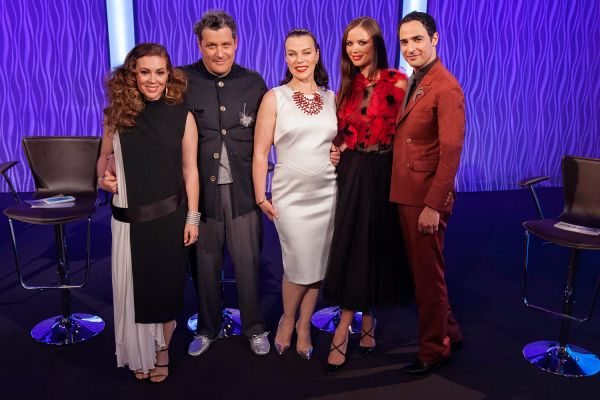 Emily‘s deconstructed black leather top and print culottes. The judges loved the masculine/feminine vibe of this pairing, and its black-and-white palette was perfect for n:PHILANTHROPY, whose current lineup of looks has almost no color and plenty of “vegan leather.” I thought her look would be manufactured and sold on the website. Instead, there are two tops sold under her name: a T-shirt with an asymmetrical opening at the neckline and a ratty-looking “vintage” sweatshirt with holes. Both look like other garments in the collection, so I wonder how much input Emily had in their design. I was disappointed on Emily’s behalf that the items reflected her aesthetic so little, but at least she’s selling something. 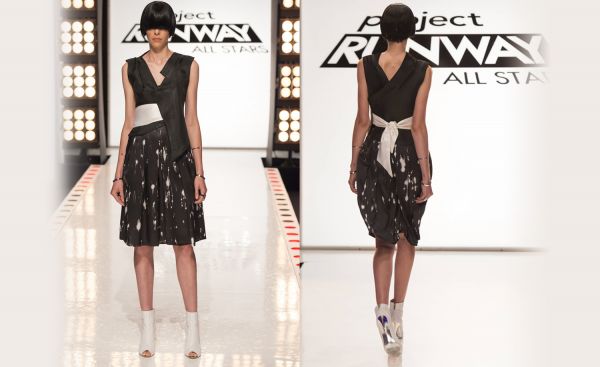 Asha‘s brocade and leather strappy dress. First: We’ve seen this fabric before. It played a big role in the final collection of Project Runway: Junior designer Peytie, where it was considered a wonderful choice for a youthful, summery, boho style. This time around, the judges thought it was too heavy and not the right color for a summer collection. They found the complicated interwoven neckline straps “strict” and “buttoned-up,” or, perhaps a little too S&M. There was too much going on with this dress, the back view of the skirt wasn’t well resolved, and the fit was off, but it’s easy to see how Asha might have been trying to make a typical summer dress more bad-a** by opting for a darker palette and bondage effect. Asha has plenty of talent, and I expect she’ll have a successful career in fashion despite this loss. 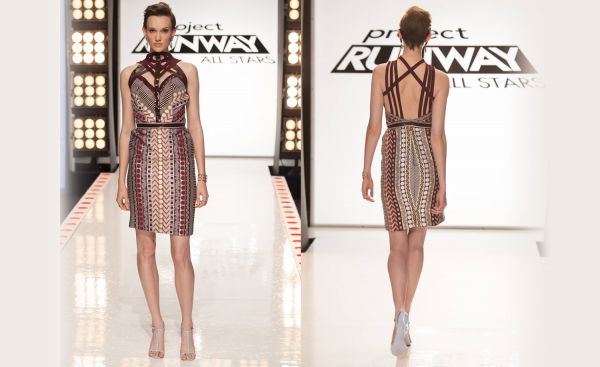 Kini‘s yellow brocade genie pants and V-neck top. I applaud Kini for making and showing this outfit. He knew that this was going to be a “love it or hate it” look for the judges, but he followed his instinct, finished it, and won the judges over with its strangeness. In the workroom, Zanna called it “disco banana,” but Debi and Isaac loved it, and Georgina was impressed. It’s not right for the n:PHIL customer, but I could see adventurous starlets wearing this to a movie premiere or a late-night talk show appearance. As usual for Kini, the look was beautifully constructed, and there was even a third piece–a yellow tweed jacket–that he completed but decided not to show. He was right not to show it (the pants and top were more than enough), but I would like to see that jacket again: He dip-dyed it in black for a fabulous effect. What a treat to see Kini step away from denim for this challenge. 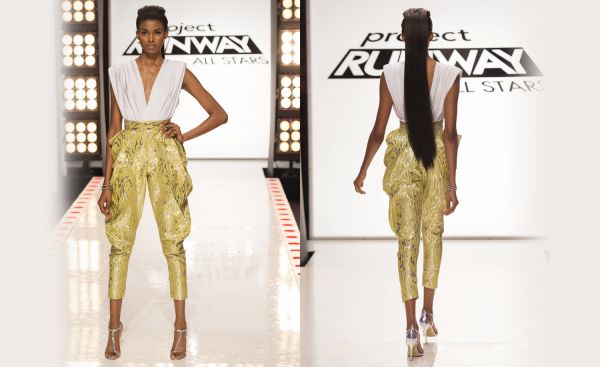 Sam‘s seersucker jumpsuit. I cannot lie: I thought this was horrid and made no sense. Sam’s tale about the Nantucket teenager (oops, Hamptons girl) who has to wear a seersucker suit to a party and deconstructs it in a fit of adolescent rebellion didn’t help. Like Isaac, I am a sucker for seersucker. It’s a classic summer fabric that has loads of potential in a challenge like this one. But the jumpsuit is underdesigned, aside from the inexplicable front flap. The flap is disproportionate and unflattering. A baby sling/bib/pageant sash/mutant lapel hybrid, in seersucker, will never be “bad-a**,” nor is it chic or even pretty. Fortunately, Zac called Sam out, getting him to confess that the flap was a last-minute fix when Sam’s original idea (equally forgettable; that is, I’ve forgotten what it was) didn’t work out. Sam would have been a low scorer in my book. 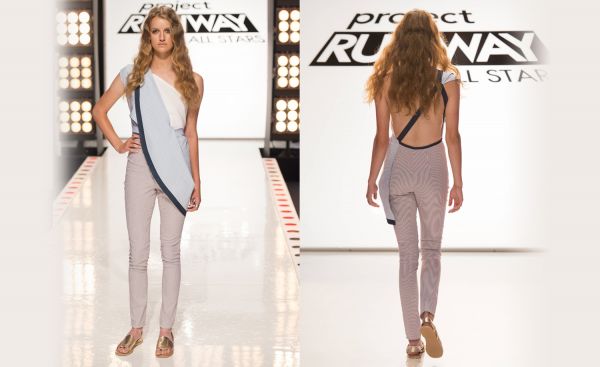 Dom‘s metallic dress with quilting. There were certainly problems with this look–a skirt slit that went too far and an overall heavy feeling for a summer dress–but it’s an interesting, well-crafted design that is true to Dom’s aesthetic. The judges didn’t know what to make of it, and it wasn’t a match for n:PHIL, either. Dom was aware of these issues. I’m glad she wasn’t sent home, and I would have scored her above Sam. I hope she gets her mojo back this coming week! 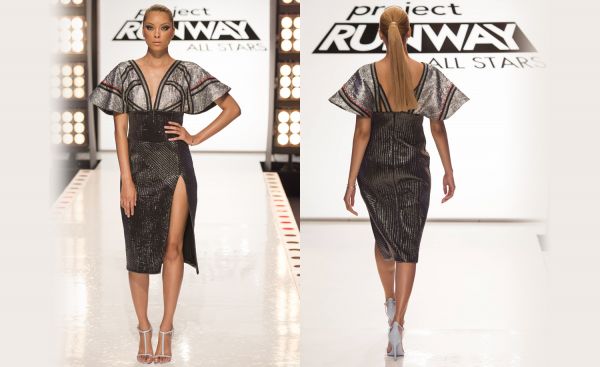 Ken‘s white jumpsuit. Ken struggled with this challenge. His style is generally elegant and often classic, so I feel he was sidetracked trying to reach for a bad-a** idea that was way out of his comfort zone. He ended up with a bland, seen-it-a-million-times jumpsuit. Kudos to his model for working it on the runway, but the judges were not convinced. They criticized the neckline (too “medical”), the belt (too cheap), and the length (too long). It surprised me that this ended up “safe,” as it seemed further from the design brief than Asha’s dress. I’ve enjoyed watching Ken’s progress as a designer and a person this season. He seems more self-aware than in the past, so I’m pleased that he’s sticking around. However, I think Asha deserved to stay, on the merits of her design. 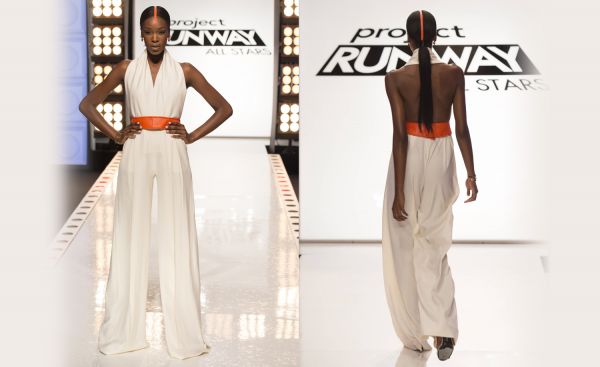 Did you agree with the judges this week? Who do you think will make it to the finale?