Red-Carpet Fashion from the 2017 Oscars

Glitz, glamour, and drama sum up the 89th Annual Academy Awards, which aired live from Los Angeles on Sunday, February 26. While we’re still reeling from the Best Picture award fumble, we’re remembering some of the colors, textures, and silhouettes worn to the star-studded show. Some of the more memorable gowns were worn by Viola Davis, Taraji P. Henson, Emma Stone, and Meryl Streep. Threads editors thought these celebs each hit it out of the park.

Here is a roundup of some trends seen on the red carpet. Click on each image to enlarge.

The overall Oscar fashion color palette was more subdued this year and leaned toward neutral champagne tones and darker hues than in the past. However, several A-listers graced the event in brilliant shades of red. We loved Viola Davis’ entire look. The Best Supporting Actress winner wore a custom Armani Privé floor-length gown that fit her beautifully. The off-the-shoulder couture dress featured a halter-style design that gathered fabric at the neckline for a soft effect.

Black and white gowns in all silhouettes and styles dominated the red carpet. One of our favorites was the gorgeous floor-length sequined black dress worn by actress Shohreh Aghdashloo. While its designer has yet to be named, the shimmering long-sleeved gown featured a sweetheart neckline and a cummerbund-cinched waist. Another notable gown was the Oscar de la Renta strapless design worn by Brie Larson. It featured an ultrastructured, fitted bodice with V-neckline and a flamenco-style ruffled skirt, complete with long train and thigh-high front slit.

One noticeable trend among the white gowns was that of trains and capes. Chrissy Tiegen, Karlie Kloss, and Darby Stanchfield each wore a design that featured a one-shoulder cape. Naomie Harris’ strapless sequined Calvin Klein by Appointment gown featured a Watteau train. 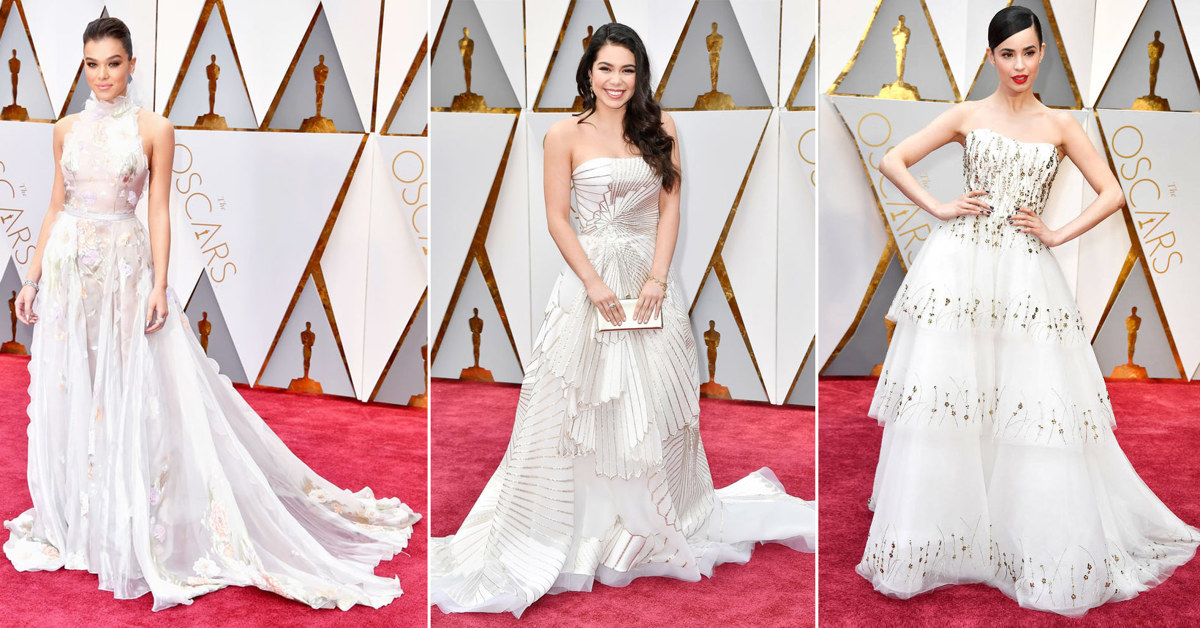 Champagne and Gold are Served 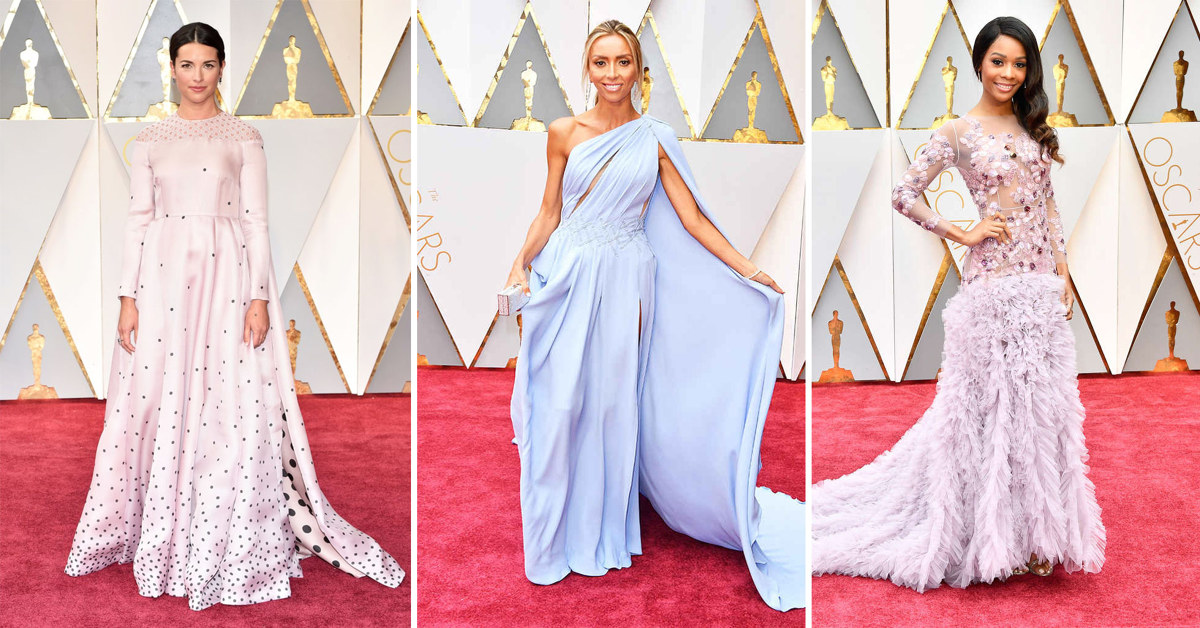 This was the year of feathers and sparkly fringe. Sofia Boutella, Octavia Spencer, and Zuri Hall (pictured above) doned dresses that featured feathered skirts. Olivia Culpo and Emma Stone opted for sparkly and shiny fringe. In fact, Olivia Culpo’s custom water-themed dress was a collaboration between fashion house Marchesa and beer giant Stella Artois and was designed for a good cause. According to E! News Online, the Stella Artois “Buy a Lady a Drink” campaign supports Water.org, which ” . . . provides five years of clean water for one person in the developing world for each Limited-Edition Stella Artois Chalice sold.” The beads used in Olivia’s dress were made from those chalices.

Left to right: Sofia Boutella in Chanel, Octavia Spencer in Marchesa, Olivia Culpo in Marchesa, and Emma Stone in Givenchy.

Givenchy Family: Cheers to #EmmaStone for her win as best actress for her leading role in #Lalaland, dressed in a custom made #Givenchy Haute Couture by @RiccardoTisci17 outfit to the 89th Annual Academy Awards held on February 26th, 2017 at Hollywood & Highland Center in Hollywood, California. @TheAcademy #HauteCouture #Love #Family #Gold #AcademyAwards #Oscars

High slits are certainly not a new trend, yet they were featured in many designs worn to this year’s show. Our favorite from this group is Taraji P. Henson. Her stunning, off-the-shoulder navy Alberta Ferretti with front slit fit her impeccably.

Like thigh-high slits, lace is a trend that consistently shows up on ensembles worn to the Oscars. Lace and lacelike textiles were used in conjunction with plunging necklines, sheer cutouts, and even as an all-over motif.

Janelle Monae’s custom Elie Saab ball gown may become one the most talked about gowns in Oscar history. The bigger-than-life dress may have been inspired by the actress having appeared in two movies nominated for Best Picture. Her ball gown featured a sheer bodice embellished with a bird motif. The entire dress, from its high neckline to wide hem, was embellished with sequins and crystals.

In a sea of gold, white, and black (and some red) there were gowns that you could not miss. Alison Schroder and Leslie Mann wore dresses with lots of color, while Cynthia Erivo and Raphaela Neihausen opted for dresses featuring colorful florals.

As with every awards show, there were a few gowns that missed the mark. While we appreciate, and often celebrate, bold fashion choices, Blanca Blanco’s slit was much too high and her shoulder ruffles where too large for her silhoutte. Scarlett Johansson’s dress, while pretty, was too sheer and its flowing, soft design called for a more delicate belt. Dakota Johnson’s Gucci dress didn’t seem to fit her properly, and the front waistline bow added unnecessary bulk. 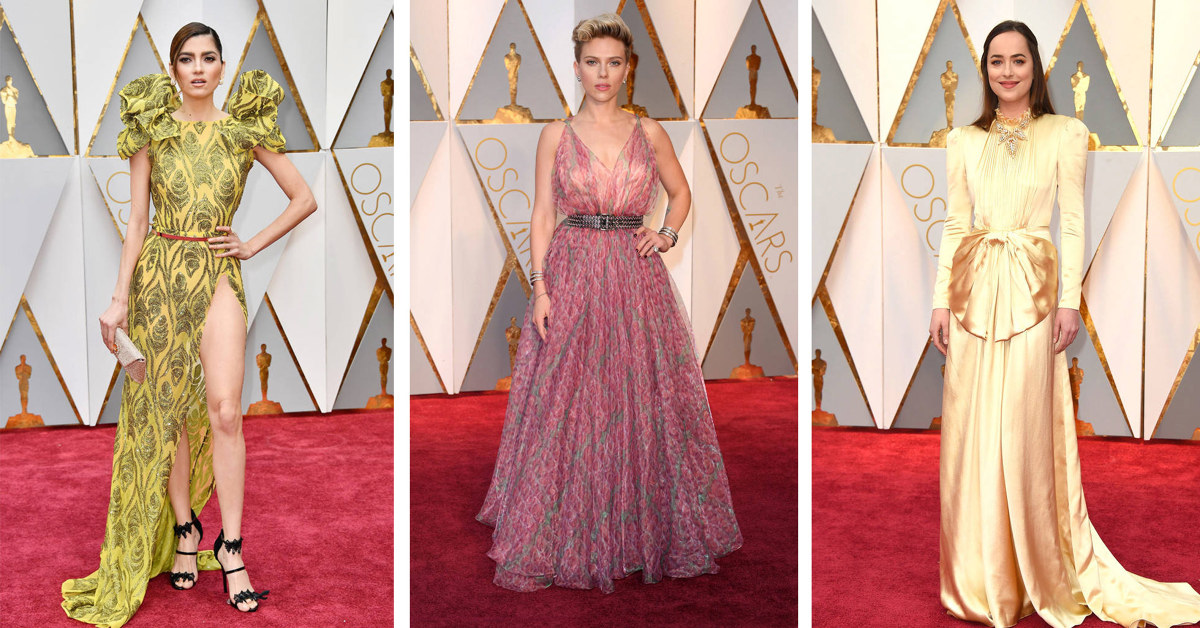 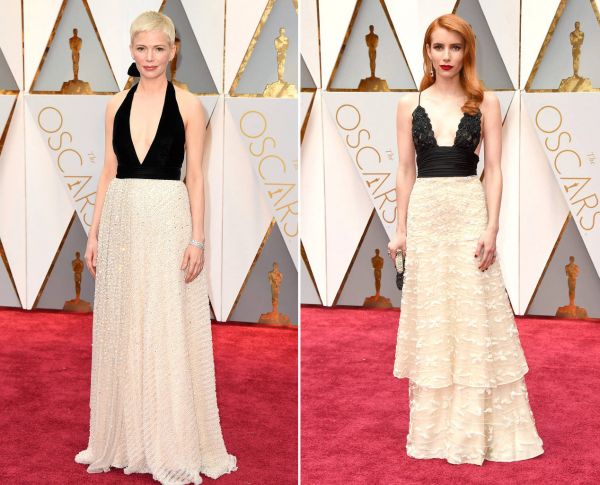 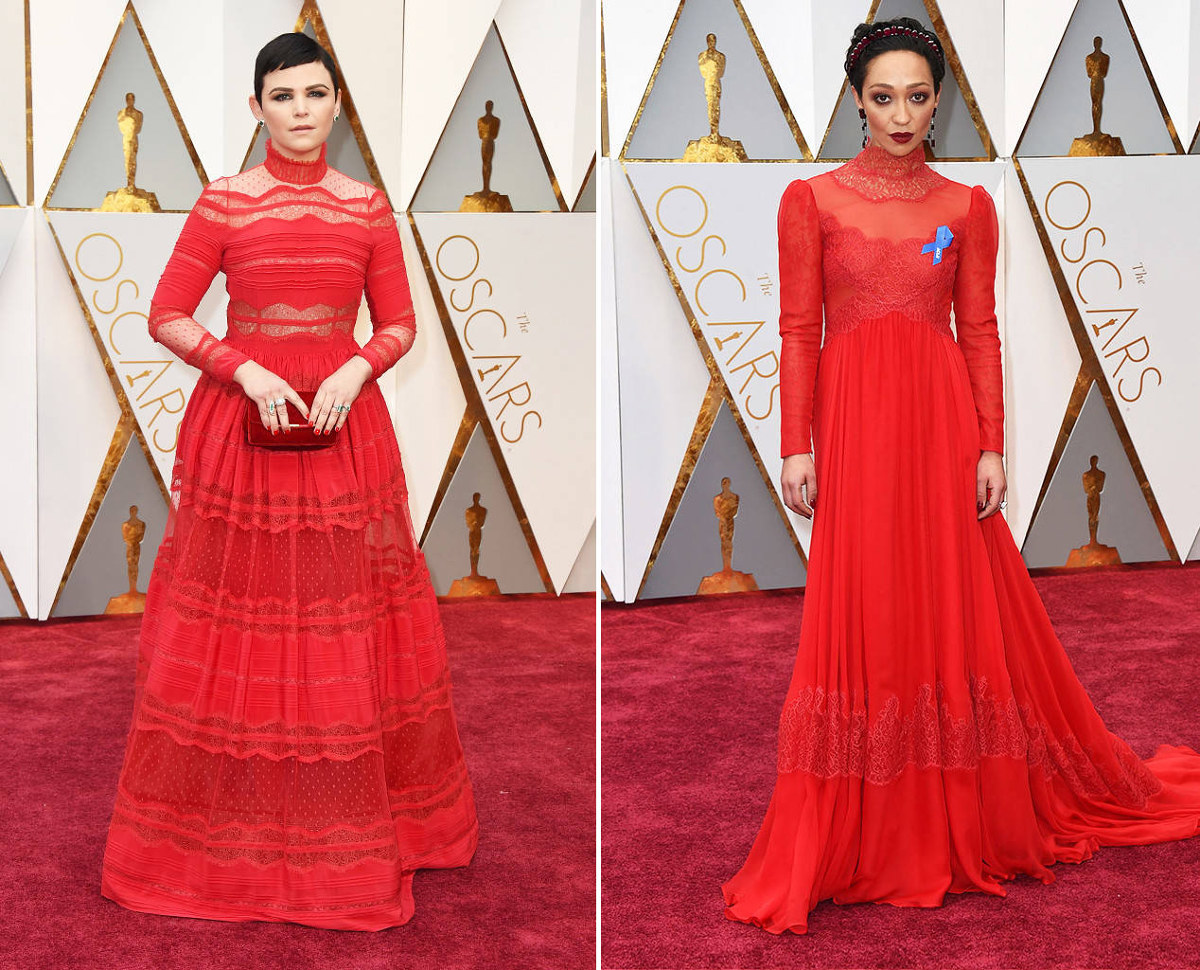 Left to right: Ginnifer Goodwin in Zuhair Murad and Ruth Negga in Valentino.

Leave it to three-time Oscar winner Meryl Streep to wear one of our favorite looks of the night. Her elegant off-the-shoulder ensemble is Elie Saab Haute Couture. The belted gown featured embellished bodice and sleeves and had a little surprise – pants beneath the skirt. 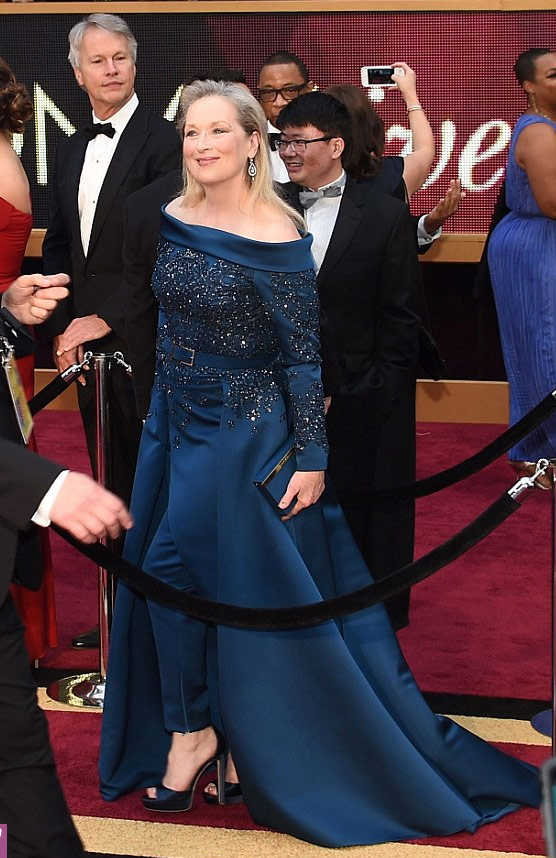 Who made your best- and worst-dressed lists? Did you see any details, shapes, or designs that have inspired you to sew? What are your favorite awards season trends? Whose Oscar gown or suit would you love to wear? Share your thoughts in the comments section.

The story of Sew Powerful began 11 years ago while Jason and Cinnamon Miles worked with the international nonprofit organization World Vision. After seeing the conditions in the Ngombe Compound…

More Notions to Try This Summer

Foldable travel ruler For sewers on the go, this ruler folds to fit in a smaller space. The Omnigrid folding ruler is 4 inches wide and 36 inches long when…