Michael Gardner bought his first Brother sewing machine for less than $100 from Walmart in 2015. His ambitious goal was to sew the bulk of his 3-year-old daughter Ava’s clothing. He quickly took to sewing, viewing it as a way to bond with his daughter while feeding his interest in creative, hands-on projects.

Astonishingly, he met and sustained his goal. All the while, he entertained his friends and family on social media under the handle @DaddyDressedMebyMG. His accounts feature adorable photos of Ava sporting the garments he made for her, often around their Philadelphia neighborhood. Little did he imagine that five years later he, Ava, and their garments would end up charming countless others on a nationwide scale.

In the early days of sewing, Michael spent much of his free time devouring YouTube videos and getting to know his first machine. He also passed plenty of time at local thrift stores looking for just the right items to transform into toddler wear. His first garment for Ava was a pair of pants he fashioned from a plaid wool skirt. With no patterns—he rarely uses patterns even now—Michael mastered his own tricks and techniques, tailoring each item to fit. He keeps up with Ava’s growth with frequent measurement updates. Michael has made T-shirts, shorts, pajamas, coats, and heaps of dresses for Ava. Many garments include coordinating accessories.

As Michael’s sewing skills grew, so did Ava’s modeling, and his Instagram account steadily filled with cheeky runway poses. 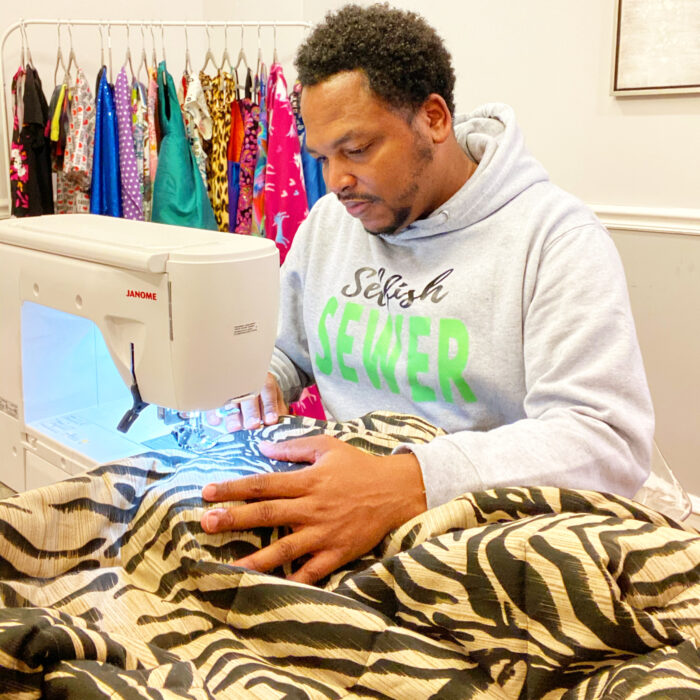 Michael and Ava share the philosophy to “always opt for comfort.” He learned which fabrics they both liked best in his thrifted beginnings, and soon moved on to sourcing fabrics at local stores, such as Gaffney Fabrics and Halal Textiles. Eschewing zippers and buttons, Michael leans heavily on elastic openings. Ava’s wardrobe is rich with cottons, knits, and jerseys. He avoids fabrics that fray and turns to gathering and pleating techniques frequently.

From a sewing station at the dining room table, Michael and Ava now sit side-by-side with matching Janome machines. He became a Janome ambassador last year when their story went viral. Their slick machines are “a whole new world,” with every bell and whistle imaginable. They collaborate on projects and share tools. Ava loves Wonder Clips, as she’s “seen me poke myself with hundreds of pins over the years,” Michael said. He frequently and sentimentally reaches for the pinking shears he bought when he first started sewing.

As a one-project-at-a-time guy, Michael keeps his current project’s fabric on a bench next to the table. He said his creativity is freshest when the area is clean and organized. He keeps all his extra fabrics tucked away in his future “sewing man cave” in their basement.

From hobby to indie business

Michael enjoys teaching Ava to sew and he looks “forward to the day when I walk into the room and she’s sewing on her own.” They are currently working on a large scrunchie project.

The past year has been full of ups and downs: Michael lost his job in accounting due the pandemic, while Daddy Dressed Me truly took off.

This year, he’s looking to the future in writing a children’s book about his and Ava’s sewing adventures. He will soon be launching a YouTube page of tutorials for sewers of all ages. Simultaneously, Michael has created a merchandise line that’s taken off quickly, with sweatshirts, T-shirts, and hats celebrating his love of sewing and Philadelphia. Michael acknowledges that Ava’s tastes may change in the future.

For now, he’ll continue as he started—enjoying sewing and modeling time with his daughter and creating one comfortable garment after another. 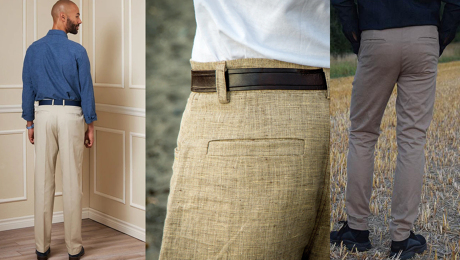