A Brief History of the Zipper

Have you ever wondered who invented the zipper, and how this everyday closure evolved? The ubiquitous tooth-and-slider mechanism has changed the way people dress, providing security, convenience, ease, and style.

April 29 is National Zipper Day. Let’s celebrate with a quick look at the history of the zipper.

Believe it or not, the sewing machine was invented and patented before the zipper. Functional lockstitch machines were in use as early as the first half of the 19th century, and in 1846, Elias Howe received the first US patent for a lockstitch sewing machine.

Just six years later, in 1851, Howe also patented a fastener he called the “Automatic, Continuous Clothing Closure.” This invention, which was a combination of movable clasps connected by a drawstring (therefore not a zipper at all), was never produced or sold. More than 40 years passed before anyone explored the notion of a sliding closure again.

In 1893, inventor Whitcomb L. Judson started the Universal Fastener Company (later Talon) and manufactured a hook-and-eye shoe/boot fastener, which he debuted at the World’s Columbian Exposition in Chicago. This closure consisted of a row of hooklike elements on one side, and eyelike parts on the opposite side. The innovative aspect in this device was the addition of a slider that closed and opened the fastener. The user would no longer have to fasten each hook individually. This slider was removable and could be used to open or close the fastener by reversing its direction. If you forgot the slider, you were stuck in your boots. Furthermore, these devices tended to pop open and tear fabric, and were pricey. 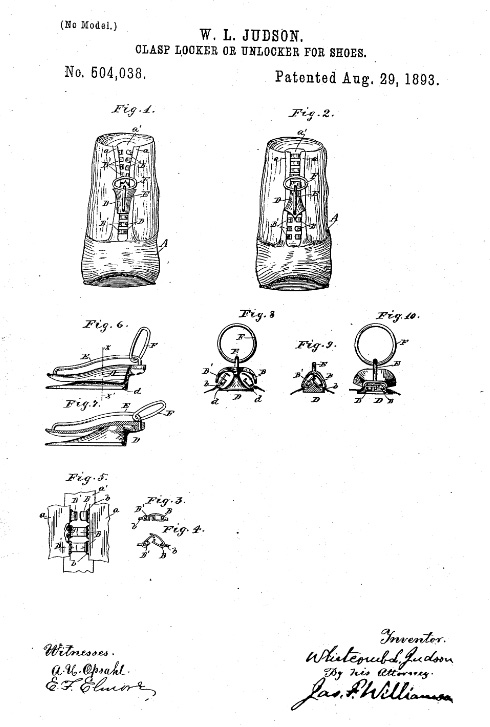 It wasn’t until around 1905 that machinery was invented to clamp the hooks and eyes to fabric tape, so the closure could be sewn into a garment or shoes. Still, it remained insecure, bulky, and expensive, and was not considered suitable for clothing.

In 1917, Gideon Sundback, a Swedish American design engineer, developed a hookless fastener  that used interlocking teeth (“scoops”) that were easy to interlock and release with an attached slider. The teeth interlocked the way spoons can nest within one another, and were closely spaced for security. Another innovation in this version was that the teeth on both sides were the same—no need for hooks on one side and eyes on the opposite side. The toothed zipper tapes were called “stringers.” This modern zipper was patented as the “Separable fastener,” US Patent 1,219,881 March 20, 1917. 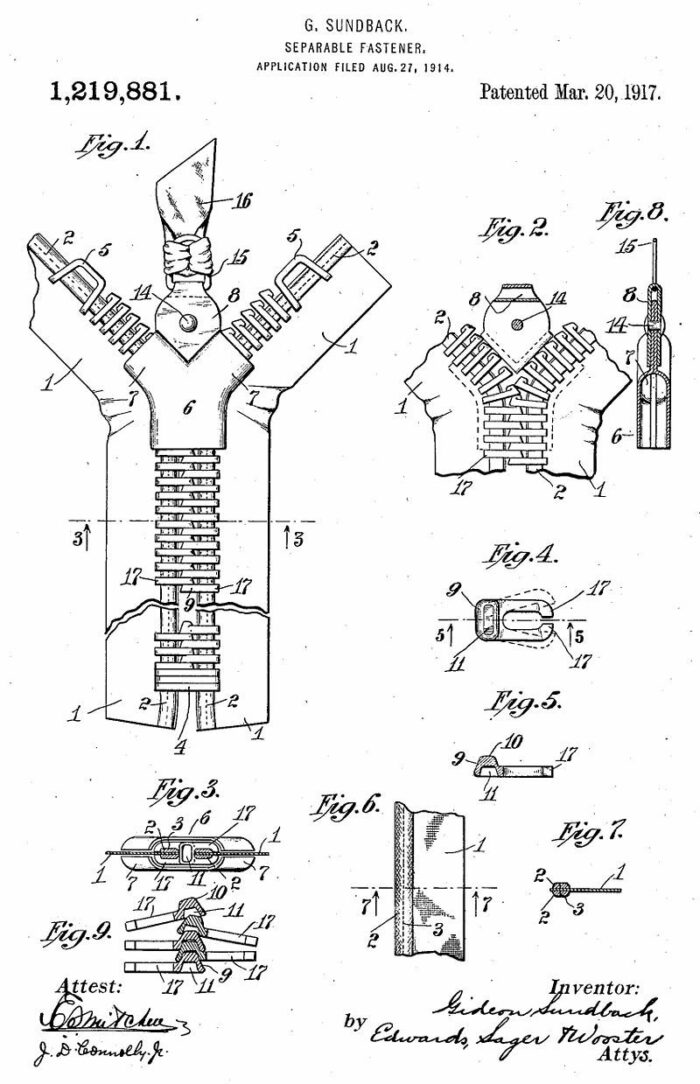 The B.F. Goodrich Company, which used the zipper for rubber boots, coined the name “zipper” in 1923. Along with boots, tobacco pouches were where most zippers were used. In the later 1920s and early 1930s, manufacturers promoted zippers for children’s clothing as they made dressing easier and encouraged independence.

Zippers didn’t become common in adults’ fashion until around World War II. At that time, they were marketed for men’s trouser flies. Talon brand zippers were top sellers in the home-sewing market.

In 1933, Charles James designed a black satin cocktail dress with a zipper that spiraled around the body from front to back, and is thought to be the first example of the creative use of a zipper in fashion.

By the mid-1930s, colorful plastic zippers appeared in high fashion, including in designs by Schiaparelli. She looked for closures that matched or contrasted with the garment fabric.

A 1938 Girl Scout uniform pattern by Butterick features a zipper at the front neckline. This gave the uniform a sporty, modern, and utilitarian look.

During the war years, zipper manufacturers curtailed production due to the need for metal, so zippers were made shorter and smaller. However, because they were touted as essential to the military, the industry wasn’t closed entirely. 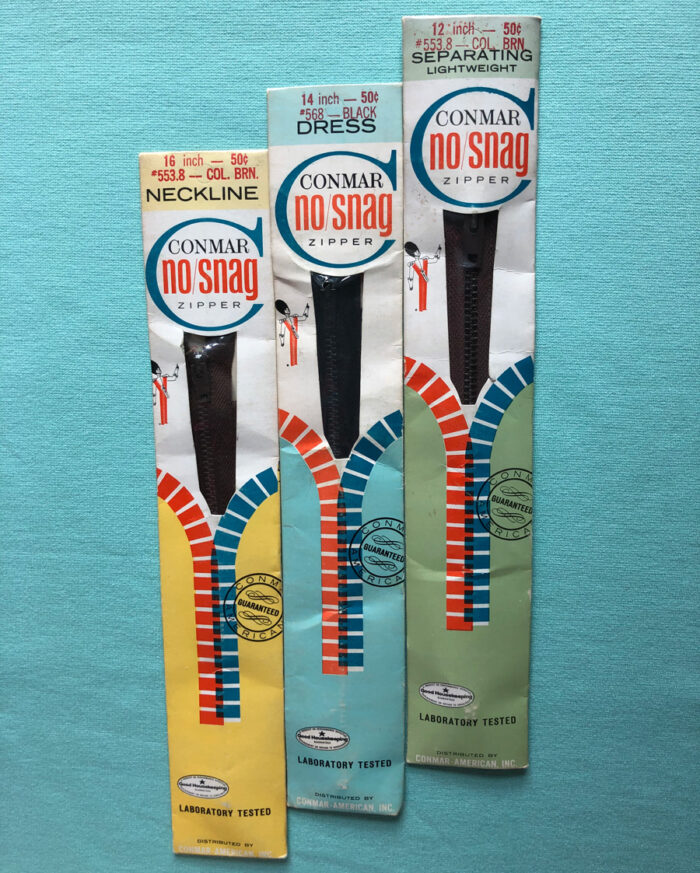 By the middle of the 20th century, consumers found zippers in a full range of garments, including dresses, skirts, and shaping undergarments. The 1960s saw the rise of lightweight nylon-coil zippers, and eventually the unobtrusive invisible zippers that are standard in much of today’s ready-to-wear clothing. 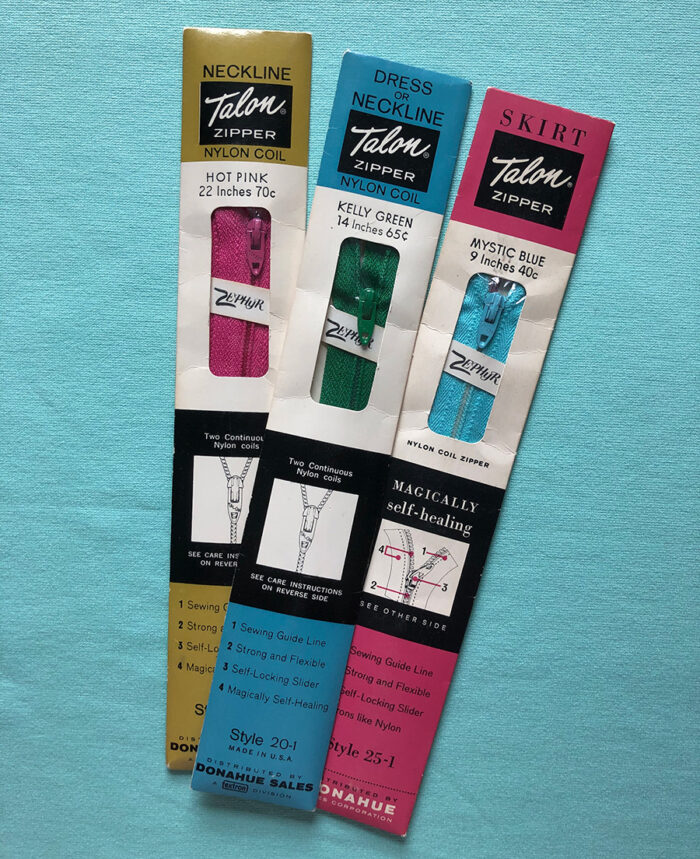 By this time, Talon had to contend with competition from an overseas rival: Tadao Yoshido’s YKK zipper company, based in Japan. Yoshido, a talented and driven entrepreneur, took his small pre-war company in Tokyo to international dominance. YKK now makes about half of all zippers worldwide.

Zippers of the future

In the 21st century, the newest innovation in interlocking closures comes from Tesia Thomas of ZiprShift.com. She developed her closure after her pet rabbit chewed through her laptop case zipper. Her product bears the trademarked name of Klōs. It creates a watertight, airtight seal. Thus far, the Klōs is not produced for the consumer market, but keep your eye out. It’s encouraging that young inventors continue to rethink the possibilities of the sliding closure.

For an in-depth study of zipper history, read Zipper: An Exploration in Novelty, by Robert Friedel (W.W. Norton & Company, 1994).