Okay, I don’t get here very often… but today I wandered over and read a message from about a month ago here: http://forums.taunton.com/n/mb/message.asp?webtag=tp-gatherings&msg=5234.101  … about tissue taffeta.

I have used that stuff… and I have information on it.

The first hint:  Avoid it if you can!

It is horrible stuff.  It frays, it gets sucked down through the needle plate and it is just nasty stuff.  Truly, if you need fancy stuff, pay the extra for some decent fabric.  I have seen shiny metallics on a decent knit that is twice the price, but a hundred times easier to use.

But, if you already have the stuff you can get it to work better by fusing it to some sturdier fabric.  I have fused it to knit interfacing or and inexpensive woven.  The trick to fusing it is NOT hit it directly with an iron… but to fuse using a damp (almost wet) pressing cloth.

This is not stuff you can use alone.  I may have at one point used it as a cape, but that required multiple passes over the edges with the sewing maching … I vaguely remember edging it with bias tape only to have it pull off (this summer I got a serger, but I have not used it with the tissue, so I don’t know if it would work better).

Attached is a (low quality) photo of a knight costume I made for an auction a couple of years ago.  The stuff is layered, including some quilting for more bulk.  I even embroidered on it… but a small piece that I sewed on later. 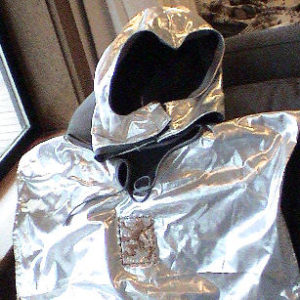