The Life of a Garment, in Honor of Buck Hill

In 2011, my partner Michael and I were visiting with his sister Sue and her husband Buck, and the topic of conversation was Buck’s old jacket that he kept wearing even though Sue believed it to be worn out.  She had tried to find a new version of the jacket, but was having no luck.  I told her that if I could have the old jacket, I’d be glad to take it apart, create a new pattern from it, and make him a new jacket to take the place of the old one.  She agreed, and we ended up taking Buck’s old jacket home.

I deconstructed the jacket, and decided to recreate it in black denim and black suede.  I was very pleased with the outcome, but more importantly, Buck was very pleased with it.  Over the next year we were told many times that he had gotten numerous compliments on it and when people asked him where he got it, he would reply that he had it specially made for him.  As the one who made the jacket, I can say that the project from start to finish was very rewarding, and the best compliments are the unsolicited ones, the kind that Buck would receive from people who just liked his jacket and went to so far as to ask him about it.

The next year, 2012, was a more challenging year for Buck, physically, and in November tragedy struck.  One evening while Sue and Buck were leaving his sister’s home after a visit, Buck’s heart stopped shortly after he got into the passenger seat of the car.  Sue and Buck’s sister both did their best in performing CPR until the paramedics arrived, and eventually the paramedics got his heart started again.  But he was unable to breathe on his own, and was placed on a ventilator.  He never regained consciousness, and sadly passed away the weekend before Thanksgiving.

So we spent Thanksgiving week with Sue and the whole family, in Cedar Rapids, Iowa, combining the sadness of a funeral with the heartwarming togetherness of family.  One evening, as the family was all together visiting, Sue related to us all the story of what happened to Buck on the evening his heart stopped – how she and his sister had performed CPR, how the paramedics arrived….then Sue looked me and said “I have a favor to ask of you”.  She left the room and returned with Buck’s jacket in her hands.  She explained that during the CPR, Buck was wearing his favorite jacket, and the paramedics had to cut it off of him.  The jacket was in pieces.  She then asked if I could take the remains of the jacket and make something new out of it, something that she could remember Buck with, perhaps a pillow for his favorite chair.   I said I would be honored.

So we took the remains of the jacket back home with us to Nashville, and we talked about the possibilities of what to make and how to make it.  Once home, I deconstructed the remains of the jacket and started deciding how to lay it out.  I ended up using both sides of the black denim, and had Buck’s name embroidered on a piece of the black suede that was the back piece of the jacket.  I was able to keep the collar (which forms the top of one side of the pillow) and I kept the pockets, half of the zipper, and I was able to reuse the cuffs which form the bottom of the backside of the pillow.  I also made my own piping using the reverse side of the black denim that I took from the sleeves.

Michael suggested that we make a small card with Buck’s picture on it and a small write-up of the story of jacket, and place it inside one of the pockets.  He also took the remaining unused materials and had them shredded so we could use them as stuffing for the pillow.  The shredded materials were just enough to fill it, and I did make a small card with Buck’s picture and some thoughtful words on it to put in one of the pockets.  We plan to have the pillow shipped to Sue in Cedar Rapids, in time for Buck’s birthday which would have been on Valentine’s Day.

I’m very proud of this pillow, and look forward to seeing it in Buck’s favorite chair one day.  It was a heartwarming project, from beginning to end.  And it was an honor to have created something that he enjoyed so much, and then turn it into something that can serve as some comfort now that he is gone.

The jacket after paramedics cut it off of him.

The remnants of what was left work with. Unused materials were shredded to create the pillow stuffing.

The back of the finished pillow, using the pockets, zipper and cuffs from Buck's jacket.

The finished pillow with his name embroidered into the suede.  The top piece is the collar from his jacket. 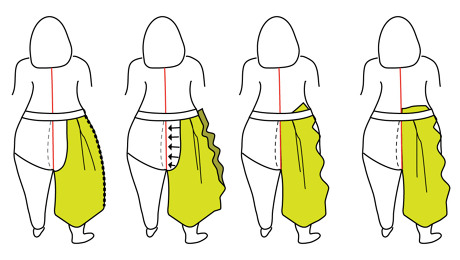 Every fix has unintended consequences that affect another part of the pants. Learn a sensible approach for pants fitting, here. 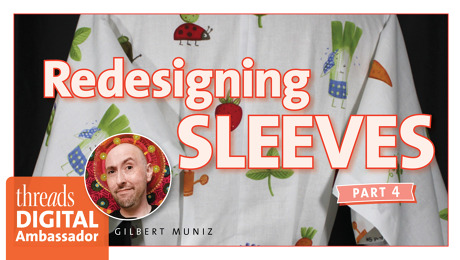 Add flowing handkerchief hem sleeves to your next garment, with Gilbert Muniz's easy instructions for drafting and stitching this style.