This is a picture I found for the a quilt I’m putting in the quilt show in Oct.  It was made for my cousin who will be using it as a wall hanging behind her bed.  I made it as small as possible without distorting the picture.  Those were some of the fabrics from Crate & Barrel that I was telling you guys I took two years or more to collect and purchase for pennies by the pound instead of the $15.95 per yard they were selling for back in the mid 1990’s. 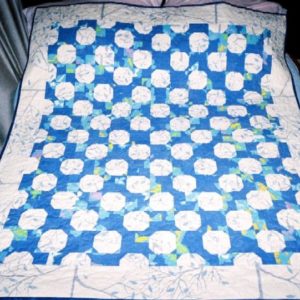