Crown to Catwalk: Exhibit Spans 150 Years of the Royal School of Needlework

From coronation robes to superhero capes to red-carpet gowns, many masterworks of hand embroidery have been possible because of one remarkable institution. Since 1872, England’s Royal School of Needlework’s original—and abiding—principles have been the preservation of hand embroidery as an art form and the support of women’s independence through work. This year, the school celebrates a milestone with the comprehensive exhibition 150 Years of the Royal School of Needlework: Crown to Catwalk, at the Fashion and Textile Museum in London.

Featuring works from the school’s 5,000-piece archive as well as pieces borrowed from museums and collections across the United Kingdom, the retrospective offers a look at fascinating projects from throughout the school’s history. There are commissions for the British royal family, contemporary runway designs, and award-winning pieces by the school’s students. If you can’t make it in person, the RSN plans online resources to enjoy the details from afar.

Threads spoke with Dr. Susan Kay-Williams, RSN chief executive since 2007 and the exhibition’s curator, about the retrospective. She shares information about the artistry featured in the exhibition, the enduring value of hand embroidery, and the ongoing metamorphosis that has kept the RSN relevant for more than 150 years.

Threads: Could you tell me about the school’s beginning?

Dr. Susan Kay-Williams: We have been the Royal School since 1875, just three years after we started. We had Princess Helena [Queen Victoria’s third daughter, 1846–1923] with us as our first president right from the beginning. She was a great advocate of getting her family to order pieces from the RSN.

TH: Was there a work that “put you on the map”?

SK-W: The first thing that I know we did that was in the papers, we did some embellishment on a dress for Queen Victoria [1819–1901] in 1877. It was what was known as a drawing room dress, to host what was known as an “at-home.” This wearing was special, because as well as our embroidery on the dress, she wore the Koh-i-Noor diamond [at 105.6 carats, one of the largest cut diamonds in the world and part of the British crown jewels] as a brooch.

Mostly, though, we were about art embroidery. That’s mostly pieces for the home. We have done pieces for the royal family for the rooms at various times. But then, the big thing that we did, that really put us on the stage, was the funeral pall of Queen Victoria. Her death was expected but sudden, and things had to happen quickly. The family wanted a new pall made, and no commercial company would touch it because the time was too short.

Princess Helena said, ‘My school can do it.” From the time it was confirmed with the order, to it leaving the RSN, the pall took 48 hours. The actual stitching was 21 continuous hours. There were up to 45 stitchers who worked on it.

TH: How was the RSN able to work so quickly?

SK-W: Two of our fundamental principles were absolutely entrenched in the project. Number one is that our team can work collectively, yet it will look like the work of one person. The other is that when we have a rush job—and that was the ultimate rush job—never a seat shall go cold. So if one person gets up, someone else sits down. From there, we went on to work on every coronation for the 20th century, that’s four of them, but then more recently we have undertaken pieces that have gone down the runway for designers.

TH: The retrospective title mentions “Crown to Catwalk.” Is there a particularly memorable catwalk garment?

SK-W: There is quite a story behind a dress in the exhibit. We were contacted by Susie Amos Cameron [wife of movie director James Cameron]. It was at the time Avatar came out [2009]. She initiated a competition, Red Carpet Green Dress [RCGDGlobal.com], something that was a bit different in terms of the ecological impact of the dress. Subsequently, every year there is a design competition for students in America. Then they select a design to win, work out the company that’s going to realize the design, but they may not know who will wear it on the red carpet.

The design that was chosen in our year had a lot of embroidery. Vivienne Westwood’s company was selected to realize it, and her team came to us to see if we would do the embroidery—but we still didn’t know who would be wearing it when we began work.

TH: Did you need to know the dress size?

SK-W: Yes, eventually it was decided that Naomie Harris would wear it, who has played Miss Moneypenny in several James Bond films. The idea was this was going to be organic or recycled materials, and natural dyeing. That adds a lot of complexity. For example, the dyer had to have it back three times, until Vivienne Westwood’s team were satisfied with the color.

The third time the dress went back, the dyer told me she was drying the dress with a hair dryer with the courier standing there in her garden waiting to take it to the studio. All of the pieces had to be mapped out to fit Naomie, because we didn’t want to be embroidering where it wasn’t needed.

Of course, whose time got squeezed on this? Ours. We brought in a team of people, and again it was a classic, keep-going, never-a-seat-go-cold situation.

TH: What are some of the contemporary pieces like?

The piece that won is called “Lockdown O’Clock” by Kate Pankhurst. It is an alarm clock, one of the little ones with the two silver bells on top. On the clockface, she’s changed the face to represent the phases of the moon because in a way, during lockdown, time slowed down. But then on the other hand, during lockdown, time sped up. On the back, she’s got a picture of the view from her balcony in Central London, and the foliage growing up from her balcony. To represent the speeding up of time, it’s got two wings on the top.

TH: How has the perception of hand embroidery changed since the RSN was founded?

SK-W: It’s definitely no longer just a small, domestic art. In lockdown, it came to the fore again for the positive aspects of mental health and well-being. We at the RSN have known about that since the first World War, when it was used by returning soldiers and sailors for therapy. I would put embroidery into an even wider context. At one end, you have the high ceremonial, at another end there’s the domestic. And you can use it to make all kinds of statements, and it’s also therapeutic. So I think it has many, many roles to play.

TH: What do you think might surprise visitors to the exhibition?

SK-W: There will be things there that they didn’t know about or hadn’t anticipated. For example, we actually made lingerie between 1916 and 1942. I think that might surprise most people; we have a few pieces that date back to then, but not much—people don’t typically save lingerie. Our second-year degree students are going to do a project looking at some of the lingerie from the ’30s and make new pieces inspired by those. And just the range of projects we have worked on—I think that will surprise people.

TH: Did you notice an uptick in interest in hand embroidery during the pandemic?

SK-W: Many more people have started. It was one of those things that you could acquire the equipment quite easily and of course you could do it at home. You didn’t have to go anywhere, necessarily, and we quickly changed to online teaching, to help and support those people. What we found is that many people who were at home under lockdown—and there are many people who are at home anyway because of circumstances or mobility—that they loved it, because they could now join with a class, be with other people, and feel back in society again.

TH: When the RSN was first founded, what economic opportunity did it offer to women?

SK-W: At that time, educated middle-class women didn’t work. There would perhaps be one breadwinner in the family: a father, brother, or husband. If that person died, what were the women to do? It was really a way of addressing that situation. There were clearly a growing number of women in that circumstance because there were other institutions set up at that time. I think we are the only one still surviving, but there were others. There was clearly this need, and women had a willingness to look after themselves.

TH: What type of careers do your current students go on to?

SK-W: A great variety of things, actually. We have people in haute couture—we have students working for Alexander McQueen. We also have students working in high-street fashion where they are doing sampling. That means they might do an embroidery design by hand that is later embroidered by machine. Then we have people in costumes, particularly in film. We love high-definition! It means that you have to have
better costumes.

TH: Any particular costumes you can mention?

SK-W: I’m sure many of your readers are familiar with the film Doctor Strange, one of the Marvel films. Well, the cloak that he [Doctor Strange, portrayed by Benedict Cumberbatch] wears was embroidered by an RSN graduate. In the nature of films, she didn’t make just one. She made about 20 cloaks. And he only wears the cloak in the second half of the film. How many more would she have had to make if he’d worn it all the way through? RSN graduates also worked on the recent remake of Emma, as well as Murder on the Orient Express with Michelle Pfeiffer and Dame Judy Dench.

Many of our students do commissions and their own art. Many also do jewelry, combining embroidery and metalwork for brooches, earrings, and pieces like that.

Then we’ve got people who are, if you like, continuing the tradition of the RSN, working with women in places such as Morroco, India, and Saudi Arabia to give them economic power, enabling them to earn their own money by stitching. It’s very varied, what students go on to do, and of course those who do the future tutors program, their principle path is to work for us.

TH: What do you hope viewers will learn from the exhibition?

Some people are surprised when they visit our classrooms and see the tutors. ‘But they’re so young!’ they say—women in their thirties. We don’t think of embroidery only as something you start doing when you’re ninety-six. To make it creative, to make it dynamic, you bring in younger people with their ideas and their creativity. 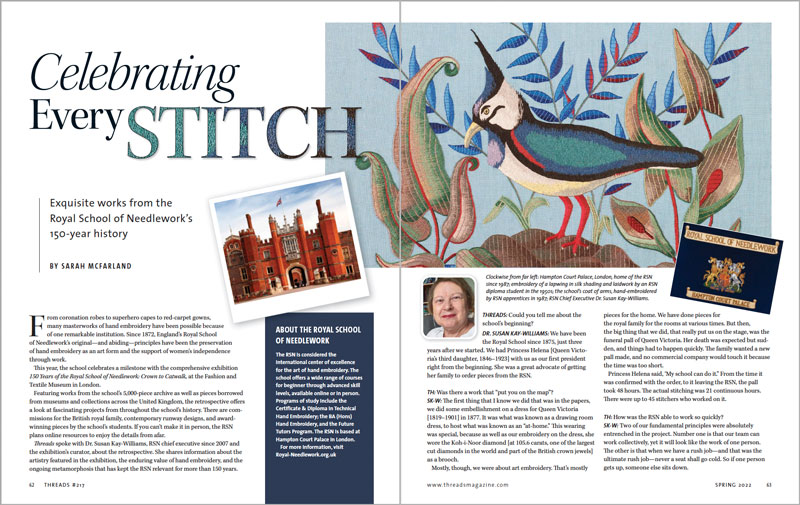 View the full article by clicking View PDF below: