I need to taper the leg width of a pants pattern that fits well otherwise. Is this more complicated than just trimming down the leg seams? Do I reduce front and back equally? –Judi Davies, Ellkford, BC, Canada

Karen Howland replies: If you simply taper the seams on an existing pants pattern or on ready-to-wear pants, you’ll typically find that there’s still more fabric below the seat and under the belly than you want. Here’s how to take out part of the width from the side and inseams and part from within the pattern, in both front and back.

Start by noting the widths you want at hem and knee levels, then measure the distance from hem to knee line. Fold both front and back patterns in half lengthwise, matching the inseams and outseams. This establishes the creaseline and center on each piece, which should be parallel to the grainline. Correct the grainline if it isn’t.

Unfold and cut both pieces horizontally at the knee. We’ll alter the lower-front pattern first. To make sure the hem allowance fits inside the tapered leg, fold the pattern on the hemline before marking and trimming. Refold the pattern piece on the center line, measure the total hem width you want, subtract 1 in., then divide the number by 4, and mark along the hem from the fold toward the seams. For example, if you want a 17-in. opening, subtract 1 from 17 to get 16 in., then divide 16 by 4. Do the same thing at the knee using the knee width you want (minus 1 in., then divided by 4), then connect the marks from hem to knee, add seam allowances, and cut away the excess.

Now, repeat the entire process for the lower-back pattern piece, this time adding 1 in. to the knee and hem widths before dividing by 4. Adding and subtracting 1 in. ensures that the pattern follows the usual ready-to-wear practice of making backs wider than fronts (which improves the hang of the garment).

Step 1: Divide front and back at knee 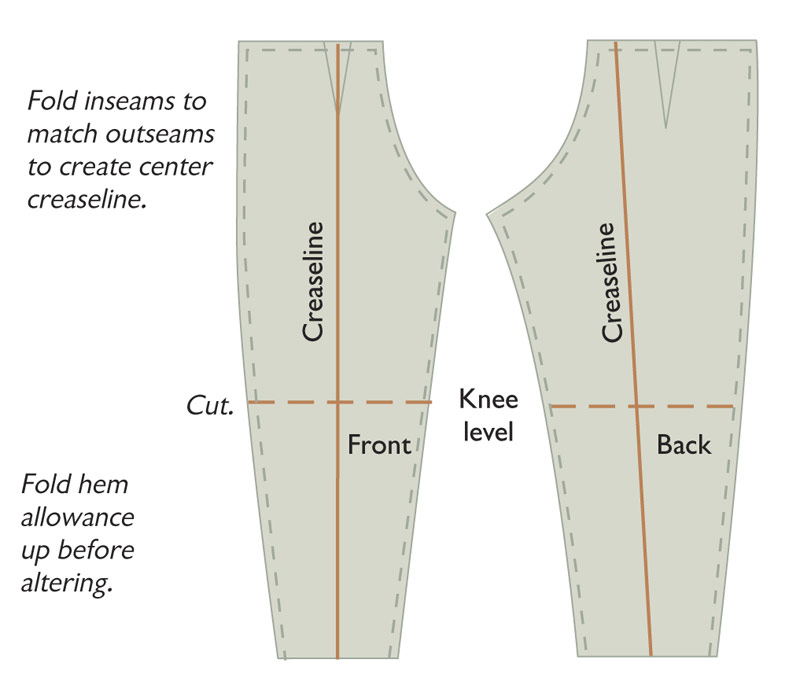 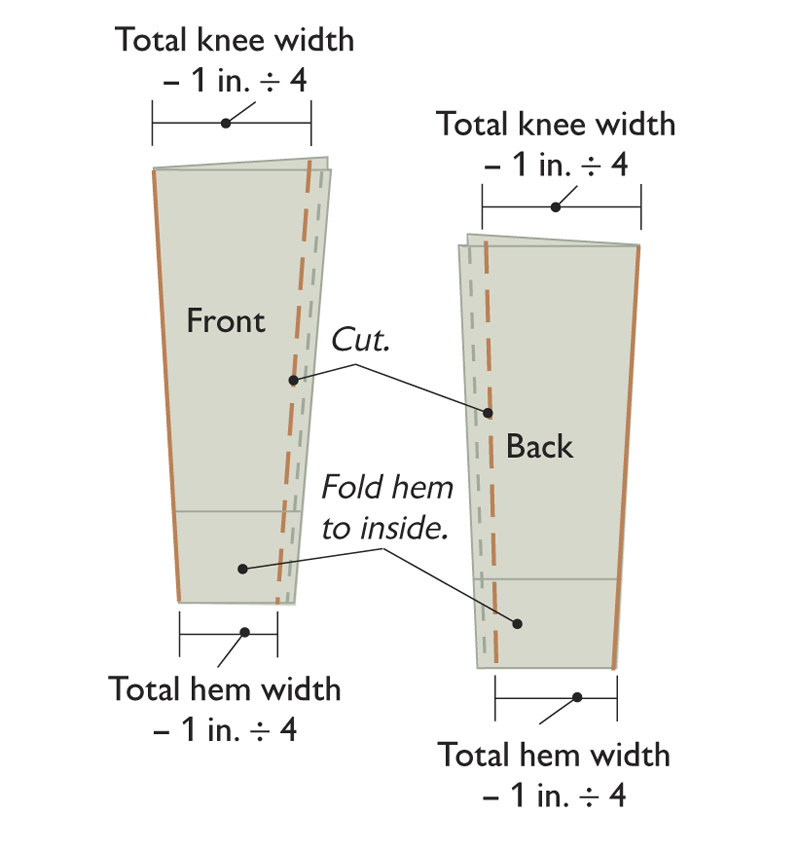 The only exception to this procedure is if your figure is so flat in front that you don’t need a front waistline dart. If this is the case, don’t separate the front pant pattern at the knee, just alter to the knee as described above, then true the inner and outer seamlines from the crotch level down to meet the knee. Split the back at the knee and alter as described below, checking the front crotch curve against the altered back to see if it needs any additional truing.

Next, we’ll reattach the upper patterns to their respective lower parts, starting with the fronts. Align the creaselines of the upper and lower sections.

The top will extend beyond the corrected seamlines on both in- and outseams, and we’ll correct each side separately, starting with the outseam. First, slash the upper pattern along the creaseline from the knee to just below the waistline dart, then cut through the center of the dart to meet the creaseline slash, leaving a little uncut section at the dart point to pivot with.

If the front or back darts aren’t centered over the creaseline (the back darts probably won’t be), just angle the slashline(s) from the knee level to the dart. Because this is a temporary alteration line, it doesn’t matter if it’s not perfectly on grain.

Keeping the inseam/crotch side of the pattern stationary to maintain the grainline, pivot the outseam section so it overlaps the center line by half the excess width at the knee, then slide the top pattern upward slightly so that the outseam stays the same length, as shown at center above. Notice that pivoting opens the dart at the waist. This wider dart builds a portion of the tapering into the actual shape of the pattern piece, causing the pants to angle inward from the belly to the ankle when viewed from the side. Trim away the other half of the excess at the outseam after truing that seamline from the hipline down to match the lower, corrected outseam.

Now for the inseam. Slash (or fold a tuck) from the center of the unshifted knee line to the crotch seam until the excess width at the inseam lines up with the corrected inseam below. Notice that this straightens out the crotch curve, which you’ll want to clip opposite the slash to allow it to spread. This is an inevitable result of tapering the legs using any method. For instance, if you had just tapered the entire inseam front and back, the crotch curve would need to be trued back to a smooth curve, which flattens it similarly. 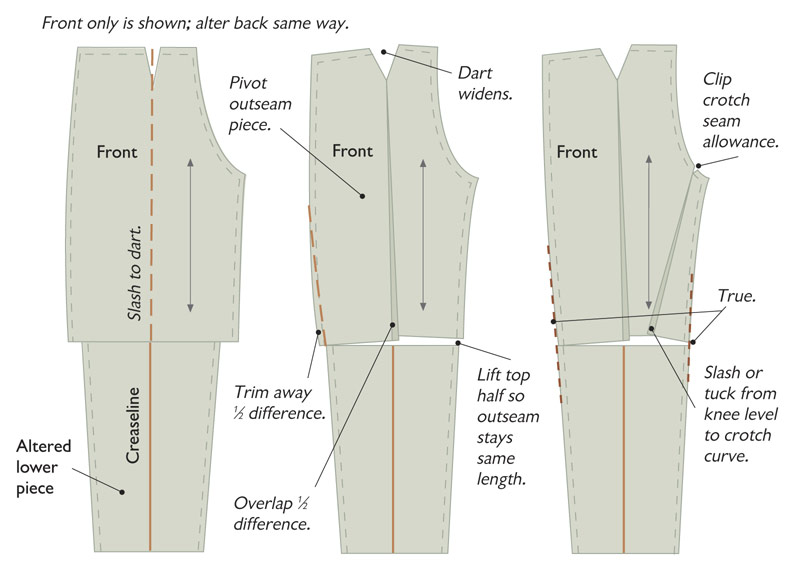 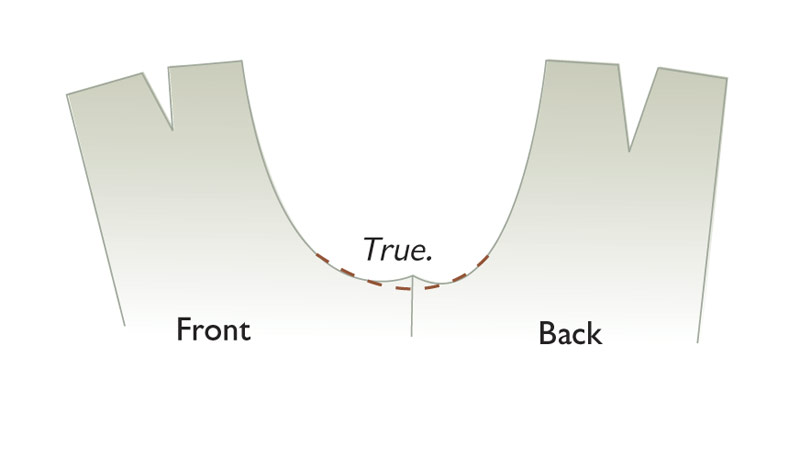 Repeat this process for the back pattern, which may require more or less tapering based on how much rear fullness is built into the pattern already, or because of other alterations. The widening that this builds into the rear dart will help the pants to cup under the rear, reducing fullness in proportion to the amount you taper the legs.

To increase the width of the leg, do the same thing in the other direction, expanding the lower leg, then spreading the upper pieces to match. This reduces the dart widths and increases the crotch seam curve, appropriate for pants with straighter, looser legs.

Karen Howland is a custom clothing maker in Chillicothe, IL. 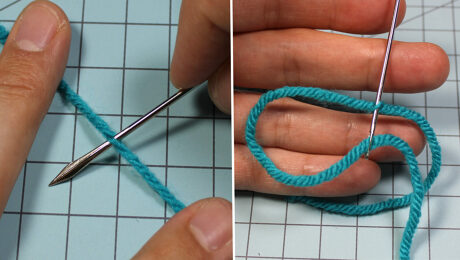