The Oddee website creates top-ten lists featuring topics ranging from the world’s strangest bugs to the most bizarre bodily functions. (The site is easy to get lost in and can become quite the procrastinator’s best friend, so don’t say I didn’t warn you.)

These dresses prove that inspiration can spark anywhere from the kitchen to the woodshop. Here are a few highlights from their round-up:

Memory of Beijing-Suitdress by Li Xiaofeng 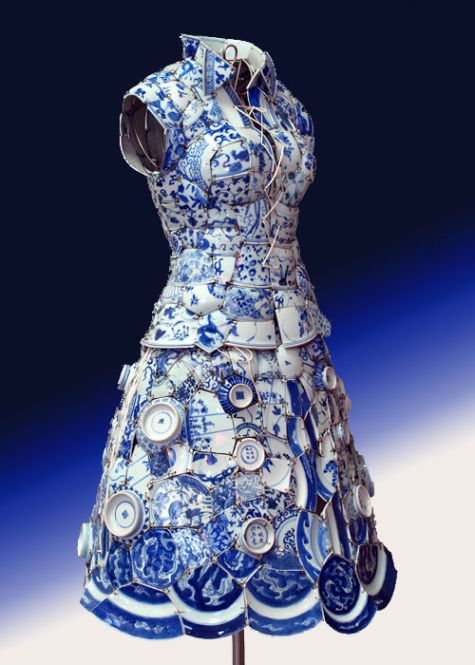 For more of Li Xiaofeng’s work, click here. The dress is made entirely from Blue and White Porcelain from the Ming and Qing Dynasties. The pieces are sewn together using silver thread.

The Bubelle Dress by Philips 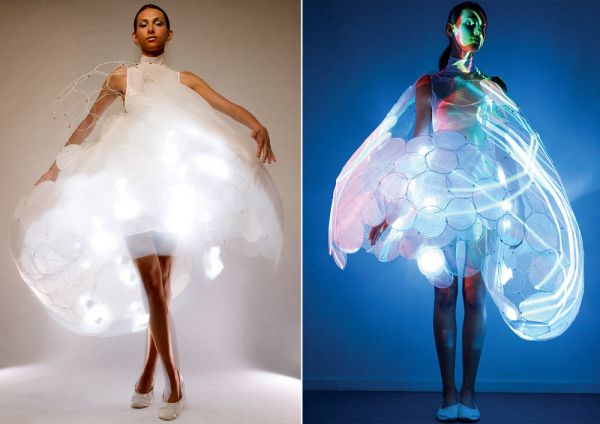 Just like the mood rings we all had as kids, the Bubelle Dress changes colors with your mood. The dress is made up of two layers: the inner layer contains biometric sensors that pick up a person’s emotions and projects them in colors onto the second layer.

The Bubelle dress was was designed by Philips and works by monitoring physical changes associated with different feelings. Emotions like stress, arousal, or fear affect the body’s temperature and sweat levels and these generate the light that changes the pattern and color on the dress.

The Video Dress by Hussein Chalayan 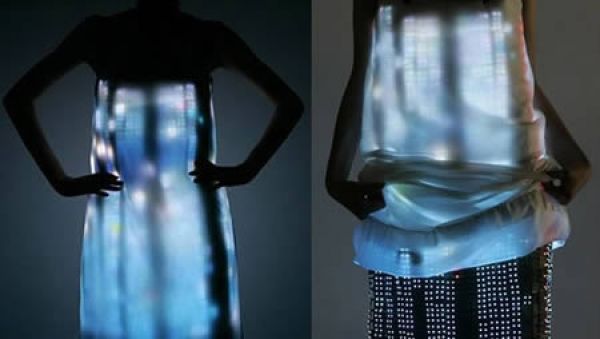 Video may have killed the radio star, but it appears to still be friends with the fashion world.

Innovative fashion designer Hussein Chalayan created these dresses that have an interlining of sorts housing 15,000 LED lights that portray videos. The videos used on the dresses were a time lapse of a rose opening and closing, in a spectacular display of color and light.

The dress made its debut at the Milan Design Fair.

While most tax protesters this year were attending “tea parties,” Britt Savage  decided to make her feelings known in a different way–she cut up her tax forms, wove them together, and created a wearable work of art. The project started as a dress to wear on stage with her band and took her about a month to complete.

The Phonebook Dress by Jolis Paons 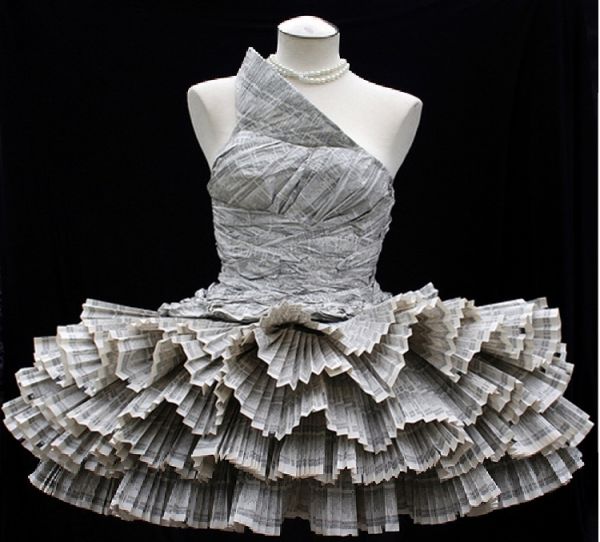 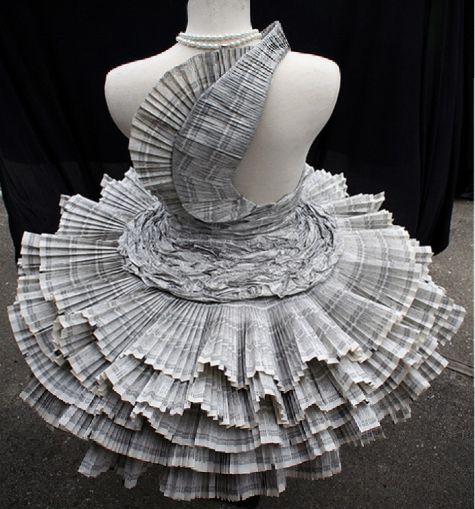 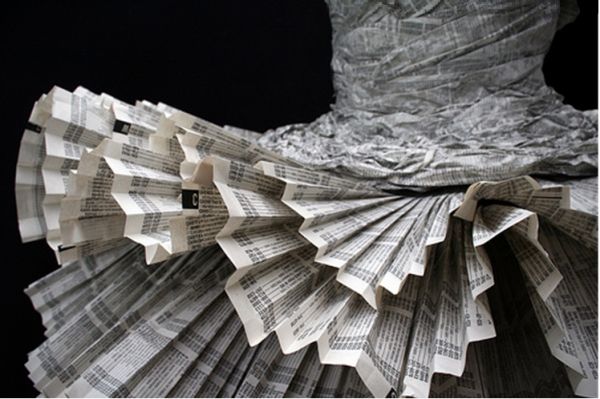 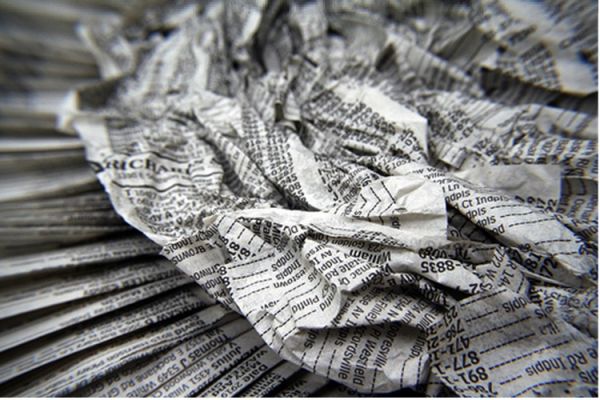 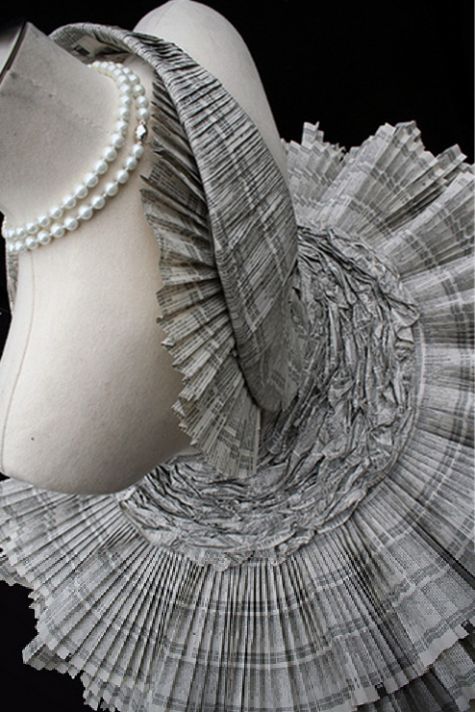 This amazing dress was created by Jolis Paons using paper from phonebooks for Creative Process. Jolis doesn’t know how to sew, but loves fashion so she makes her creations in a different way.

The Birdcage Dress by Kasey McMahon 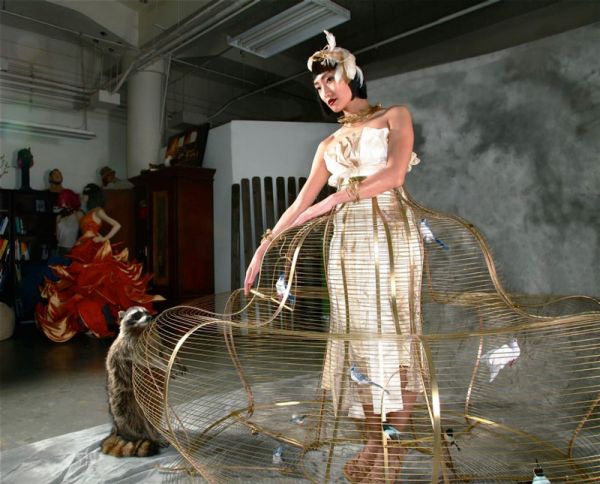 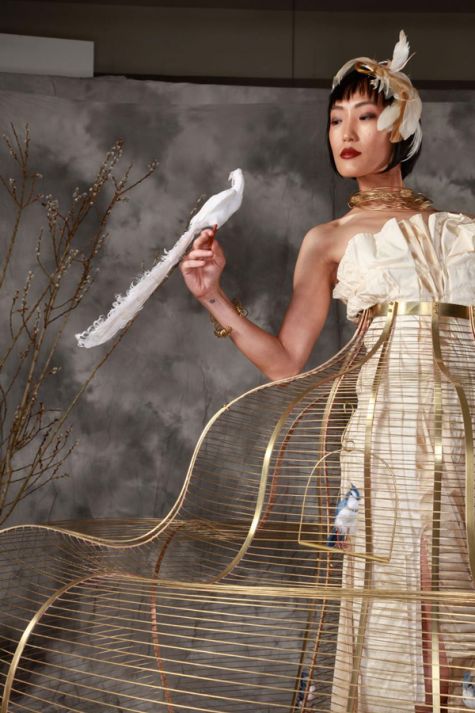 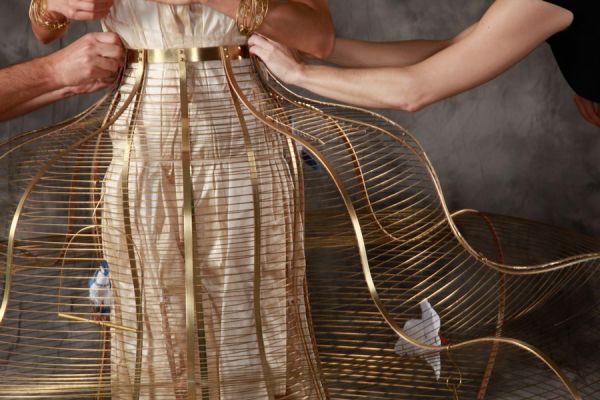 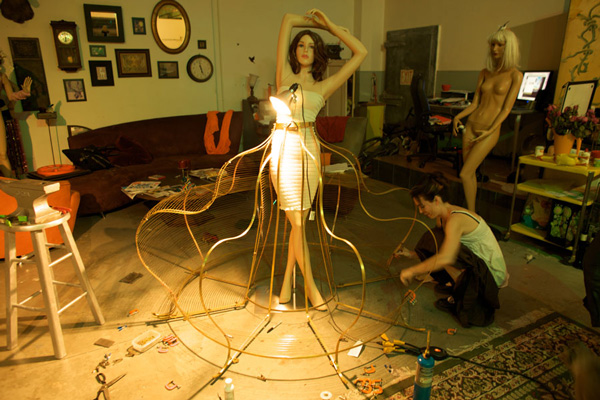 Kasey McMahon built this dress with wire and many other out-of-the-ordinary materials.

The Wooden Dress by Grace Johnston 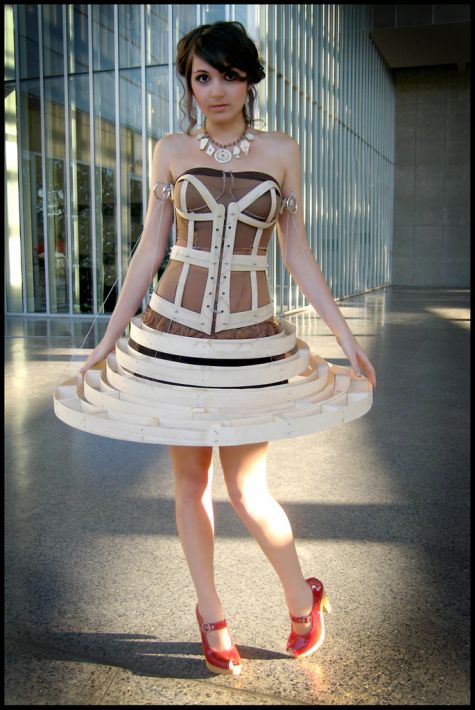 This dress was made by Grace Johnston in Louisiana for the Uncommon Threads Wearable Art Fashion Show in Baton Rouge (and she won!) From the artist:

“The entire corset is made of laminated wood, and the skirt is made of bent wood. It’s held together with bolts, etc. and I made an under dress out of pantyhose. The entire premise of this dress is that it can curtsy. All you do is pull on the rings on either side of the corset (you can vaguely see them) and the cables make the skirt rise up.”

Memory of Beijing-Suitdress by Li Xiaofeng.

The Bubelle Dress by Philips.

The Birdcage Dress by Kasey McMahon.