I’m often asked where I get my inspiration. Much of the time, it’s from my students. Last week’s crop of garments from students at my San Diego class offered lots of inspiration. Here’s a look at the students’ class projects.

Nora sews beautifully, and apart from her other training, she studied draping last spring with my Paris-based colleague Julien Cristofoli. That gave her the skills to create this top. It’s a Stella McCartney design. The fabric was a silk twill. Because the fabric is not heavy, we took the unusual step, at least in the couture workroom, of fusing the fabric first. We tested several fusibles and chose one that maintained the essential nature of the fabric without making it too stiff. 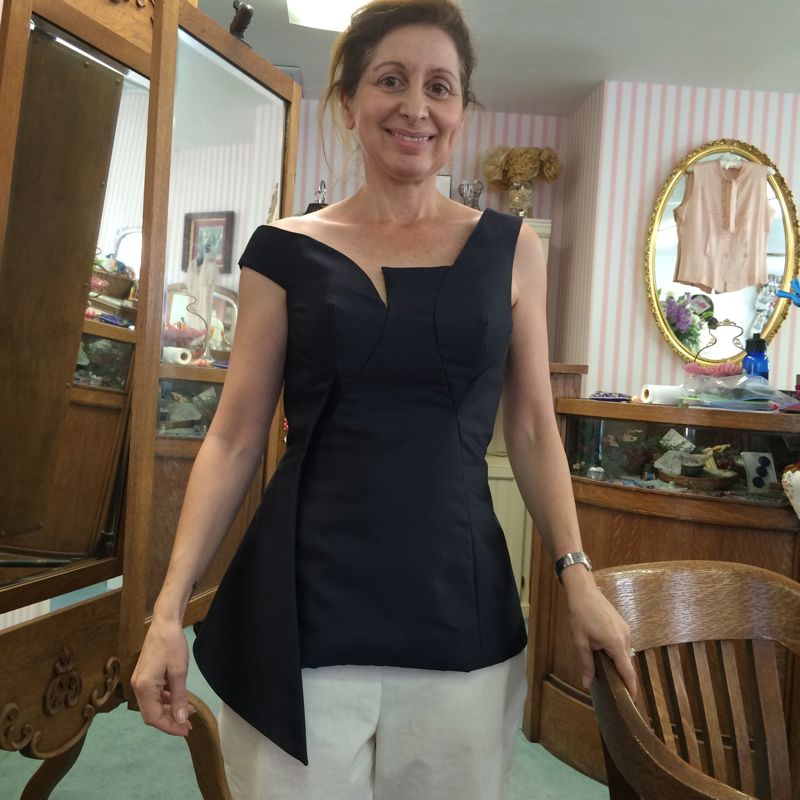 The top is one-shouldered, so a little boning was called for. There are three pieces of boning hidden in the top, including a piece tucked into the right angle at the center front. 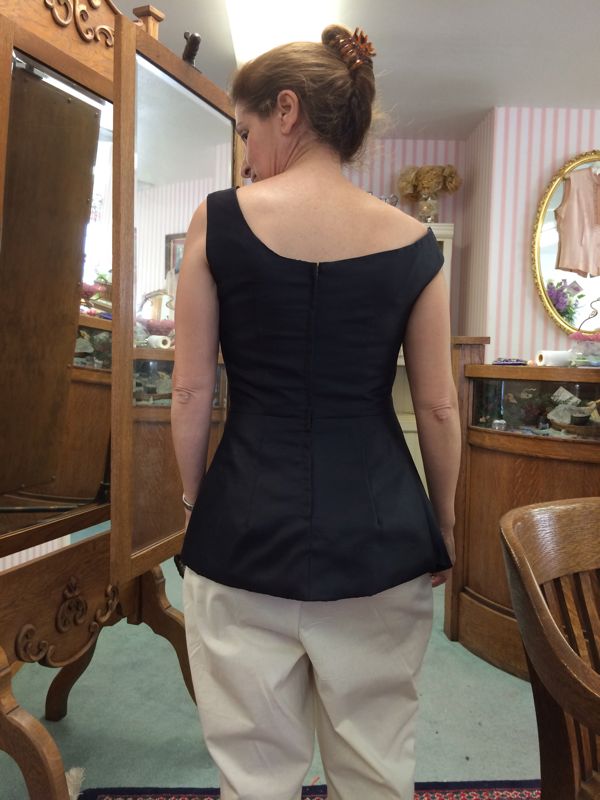 Here is a view from the back.

The right angle at the center front corner just wasn’t staying put, so we strengthened it. One of the challenges of boning is to camouflage it. It was tricky with this smooth, slick fabric, but we encased the boning in cashmere. (Someone in the class was working on a cashmere coat, so we poached some of the fabric.) There’s also a waist stay to help anchor the garment firmly around Nora’s waist.

Marianne made a dress from a vintage pattern that featured four princess panels, which narrowed at the hemline, and four bias-cut godets. One of dress’s charms was the zipper, which curved up the left-side back seam. The fabric was interfaced with silk organza, and we steamed the fabrics to mesh the layers. To my great surprise, the fabric shrunk noticeably. Boy, am I glad we steamed thoroughly. I generally recommend steaming, but it’s so rare to see such a degree of change. We gave the bias panels a day or two to stretch out after their steaming adventure, and we were careful when sewing them to the main panels of the dress. It’s always tricky sewing a bias edge to a nonbias edge. 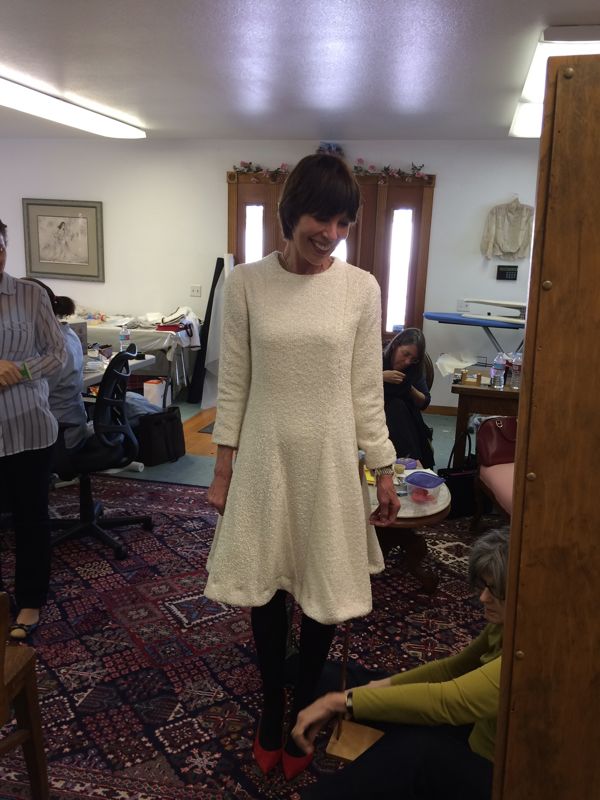 We added two weights (not visible in this photo) to the bottom of each main panel.

The weights kept the main panels straight and allowed the bias panels to flare. The result made for a lovely contrast. 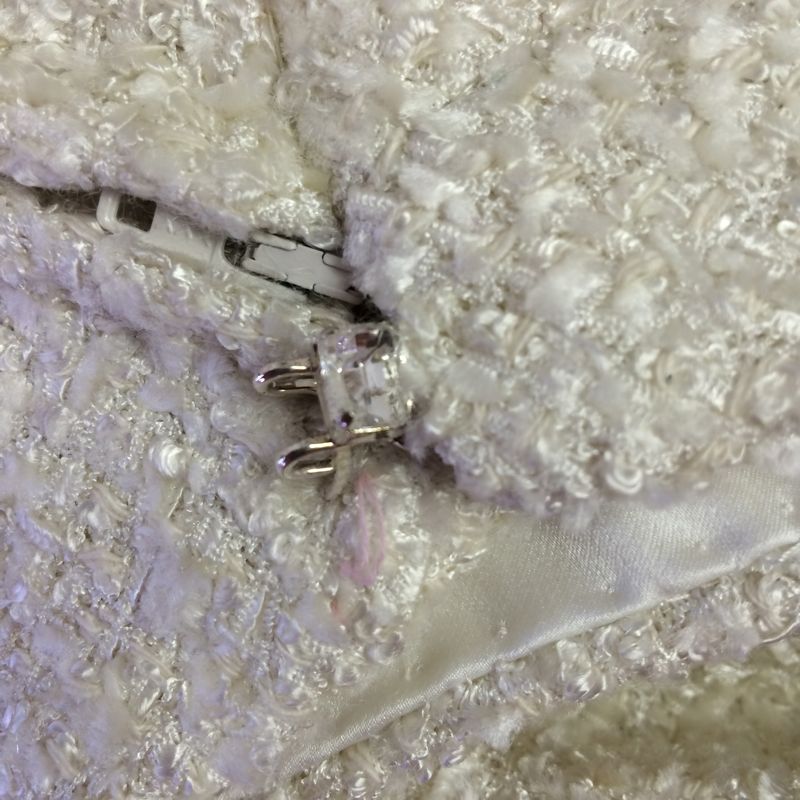 There was one small detail–a hook at the top of the zipper.

We didn’t want to use a regular hook and eye because the hook would have caught on the fabric instead of the eye. Instead, we used a rhinestone-embellished silver coat hook from Marianne’s stash. The hook fastens to a sturdy white thread bar on the other side. We used only the hook since there was no way to camouflage the matching eye, and we didn’t like seeing that much metal on the dress shoulder. The rhinestone hook is a lovely touch.

Elizabeth worked on a black wool jacket and, while it was lovely, it needed a little embellishment. We made bias tubes from the black wool and then stretched them out on the sleeve board, steamed them, and let them dry to get them uniformly thin and taut before fashioning them into ornaments. Elizabeth is playing around with placement. The final jacket won’t have so many swirls stacked on top of each other, but at this point, she’s just getting the lay of the land. 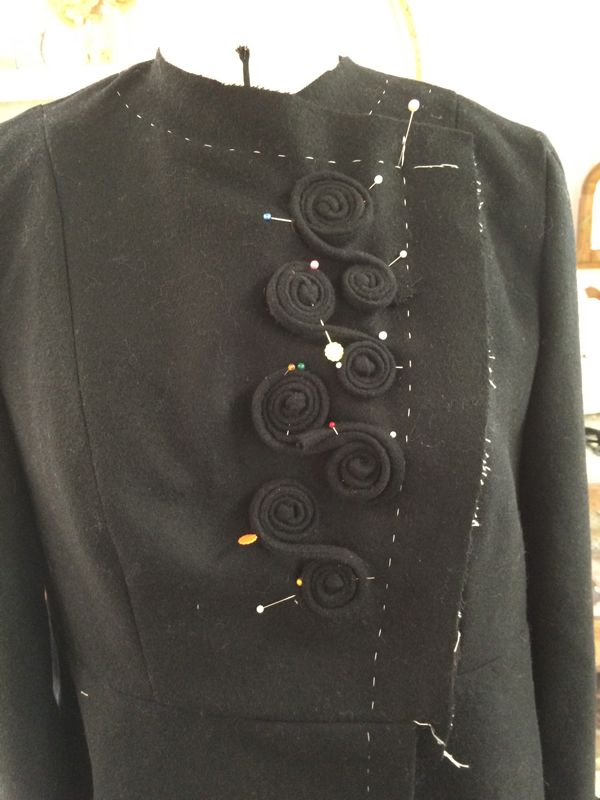 The black wool jacket eventually will be adorned with carefully placed bias-tube embellishments. 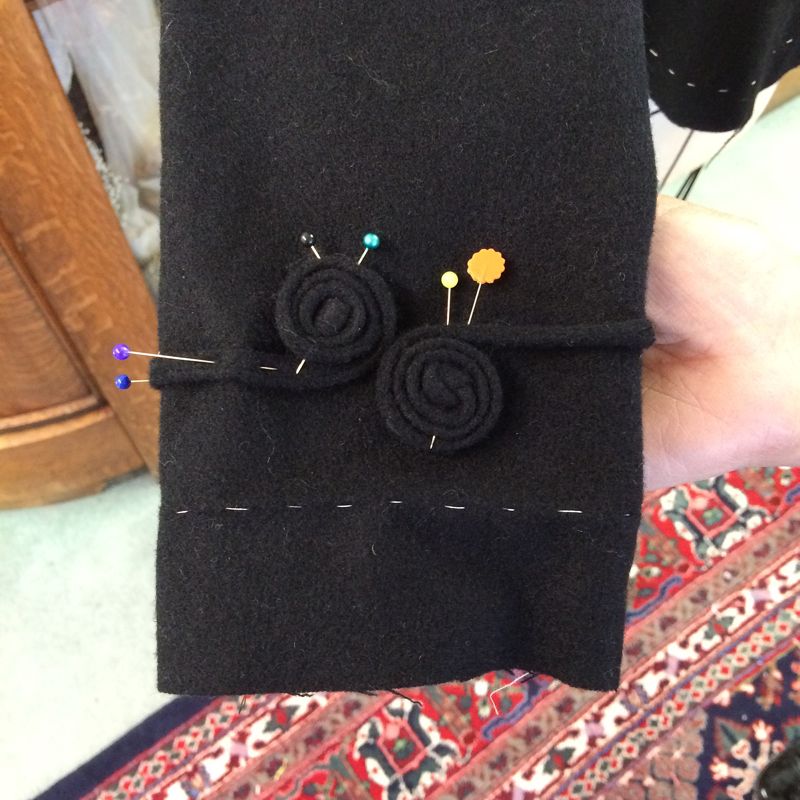 Embellishment also will be added to the sleeves. 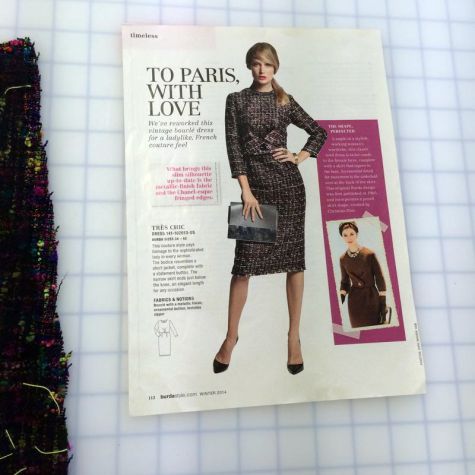 Jeanne made a dress from a Burda pattern, a free download, no less.

The fabric was lovely and lively. While it appeared nice and stable, the fabric’s horizontal grain was all over the place. It needed to be tamed. If the horizontal lines on the dress were anything less than perfect, the whole garment would have lost much of its charm. 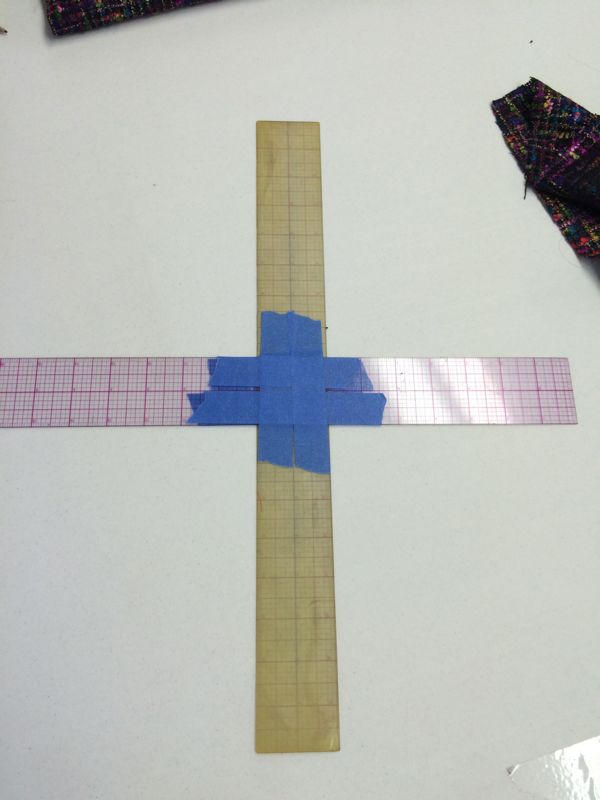 We went to great lengths to tame the fabric grain. We even made a tool from two rulers that allowed us to control the horizontal grain as well as the vertical grain. 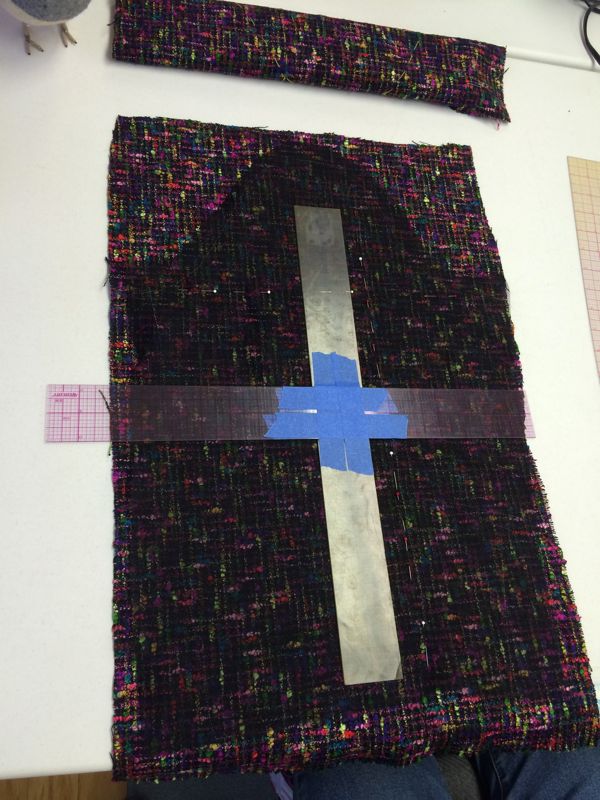 The tool got a workout when we lined up the sleeve grains. 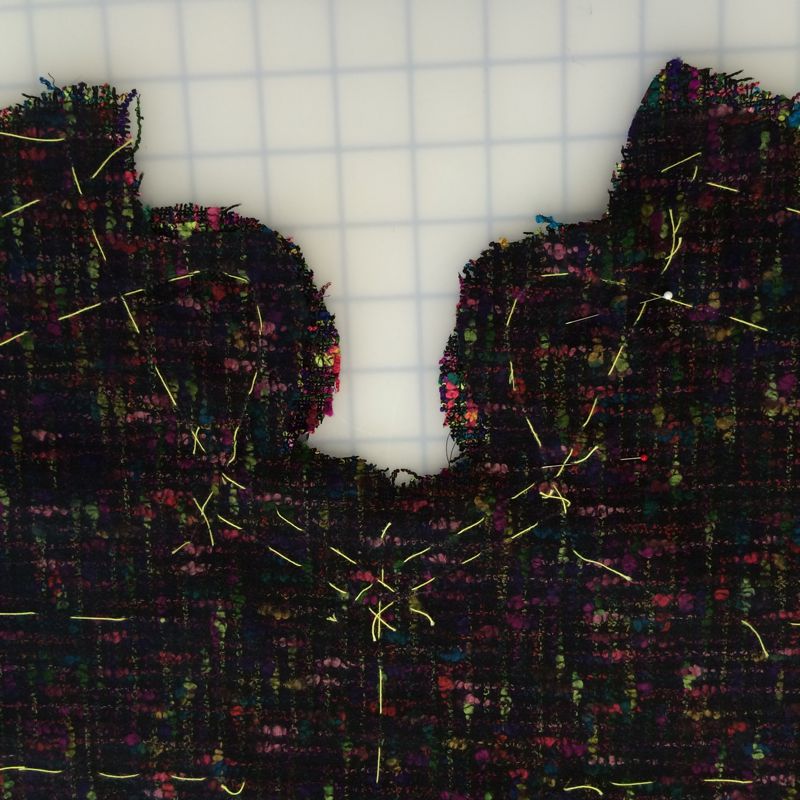 The center front was carefully basted after we lined up everything with our tool. 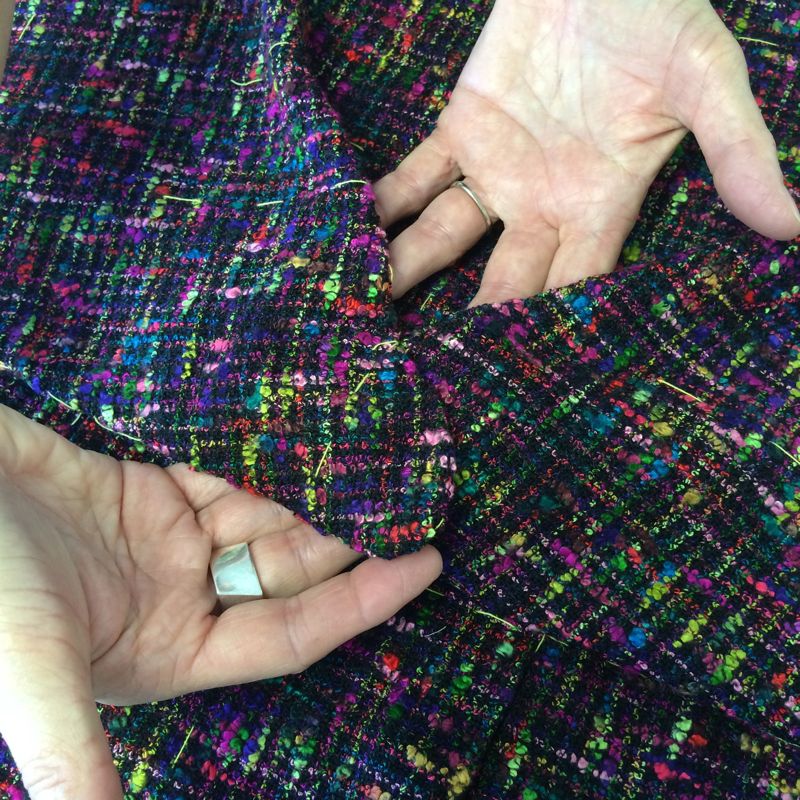 All the layers of the center front overlap eventually will be held in place by a button.

Mary Ellen is using a cute Zandra Rhodes Vogue pattern for her dress. She plans to use lace for the yoke and cap sleeves and black wool crepe for the rest of it. Her Guipure lace is gorgeous, and the flesh-colored silk organza underlay will be invisible under the lace when it lies against the skin. 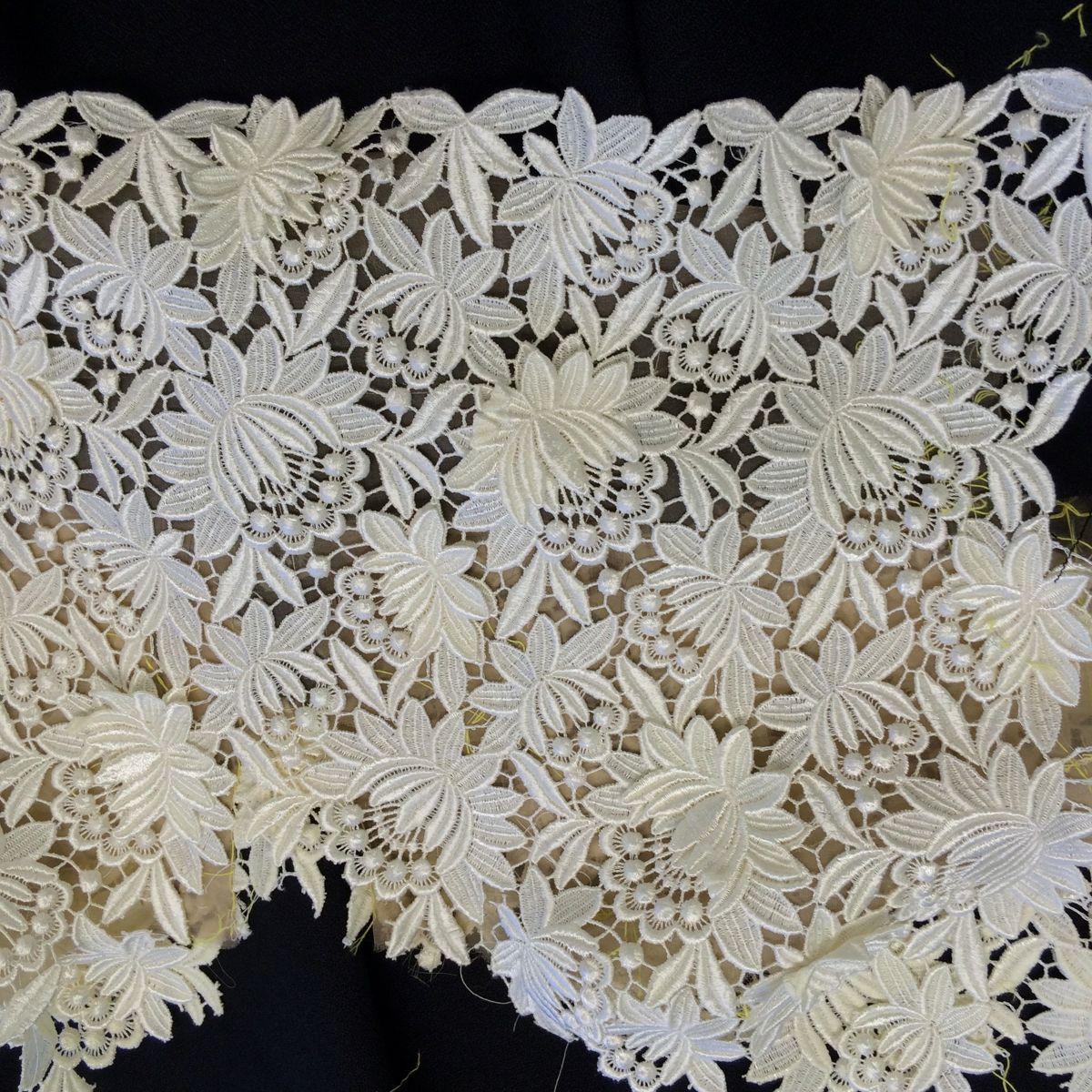 The flesh-colored silk organza serves as an underlay, and is totally invisible under the lace once it’s against the skin.

We had a lot of fun with rickrack during the week. One of the students was working on a side project, so my friend Cindy dug out embellishments she’d made. Her work features two pieces of rickrack that are interlocked-–not twisted. You can see that the concept of embellishing with everyday rickrack can be expanded. 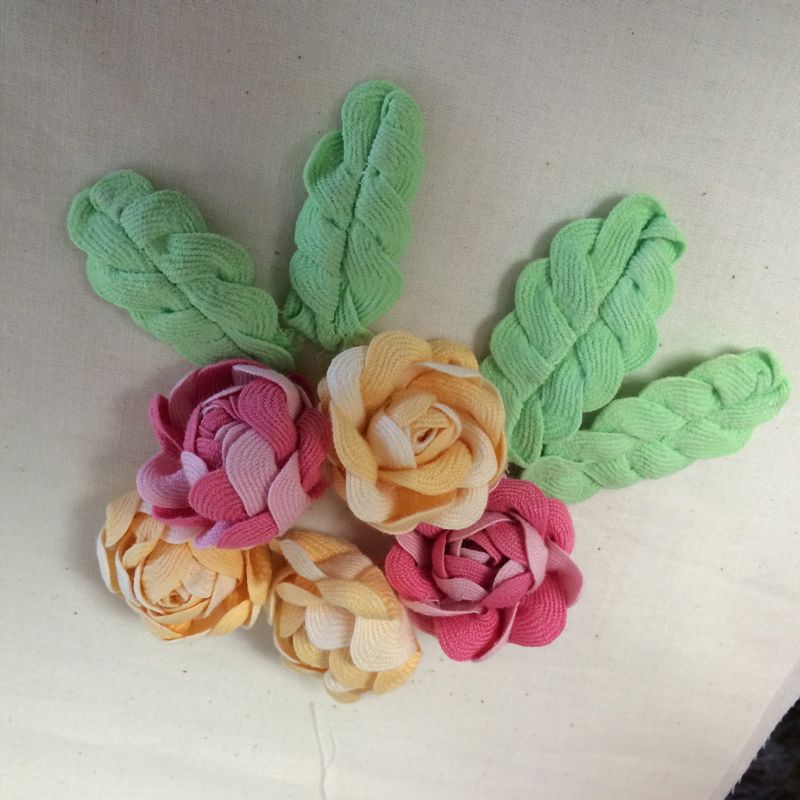 Sharon’s inspiration was a gown she saw at the Jacqueline de Ribes exhibit at the Metropolitan Museum of Art. The original was bias cut and ankle length. Sharon also has studied draping with Julien, and she draped the dress. She chose a weighty satin-backed silk crepe and underlined it with something similarly flowing, in this case, silk crepe de Chine. 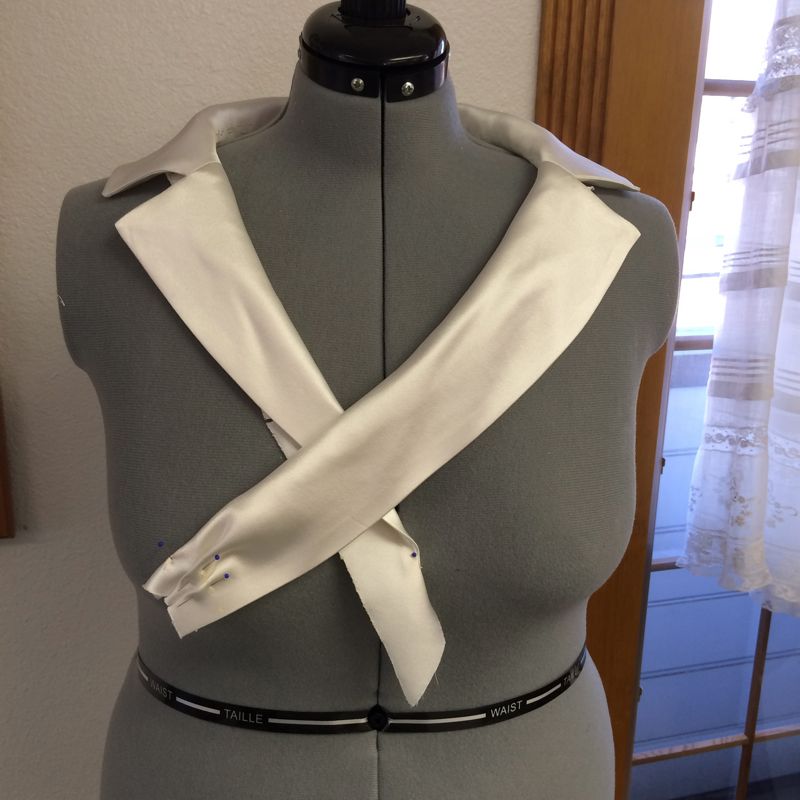 The collar was underlined with silk organza, which, in the final analysis, had too much body for the silk crepe collar.

We cut the underlining out of the collar, leaving it in the seams, and it worked just fine. 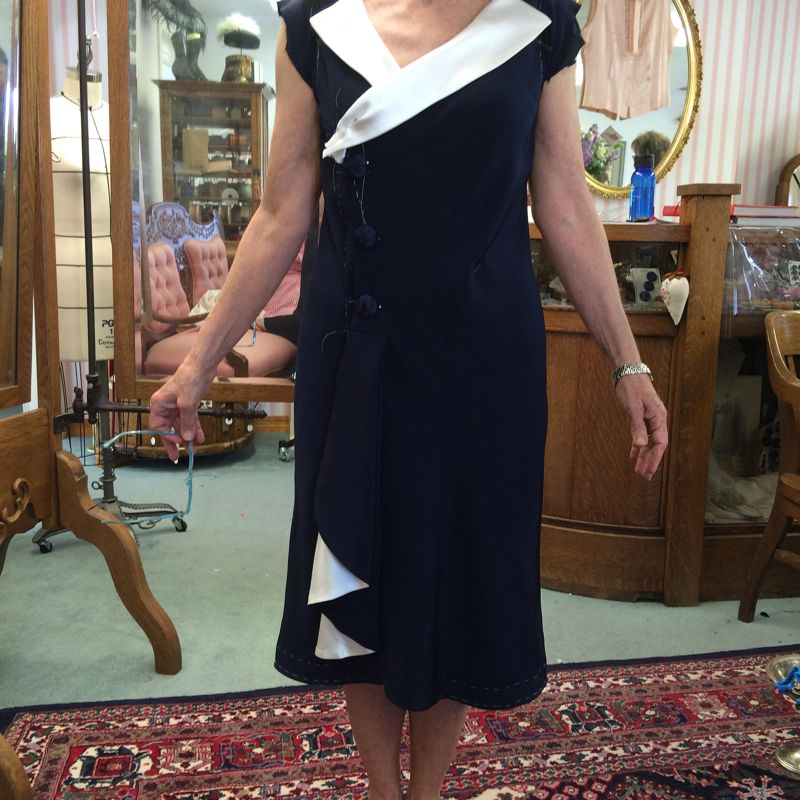 Notice the dress flounce. Its contrasting facing is from the same fabric that Sharon used for the collar. 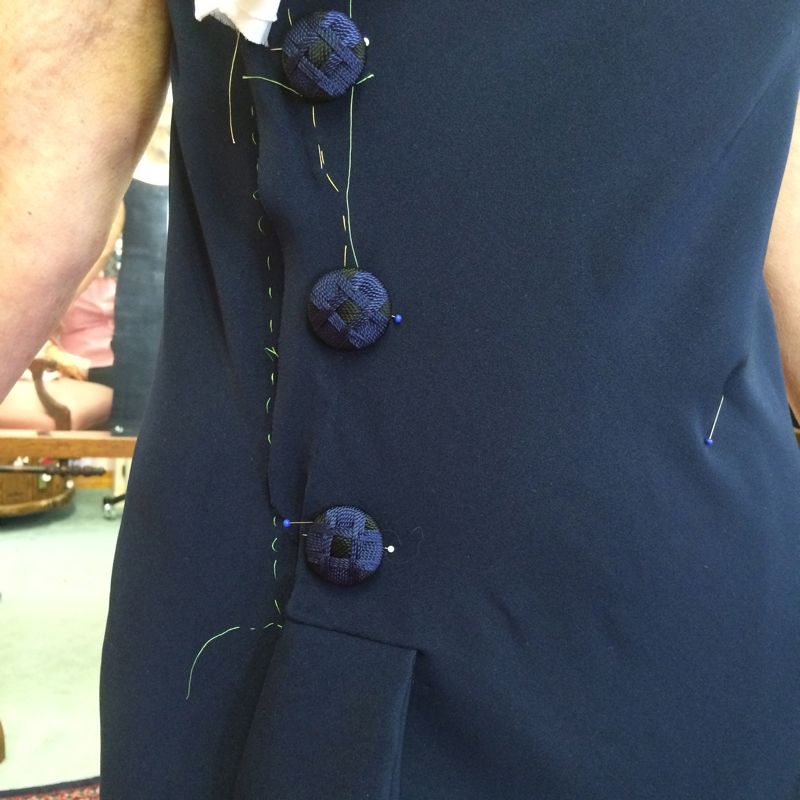 The buttons and their placement turned out beautifully. We fused the area to which the buttons were applied. It’s a good idea anyway, and as they were on the bias in this instance, it was wise to stabilize the fabric. 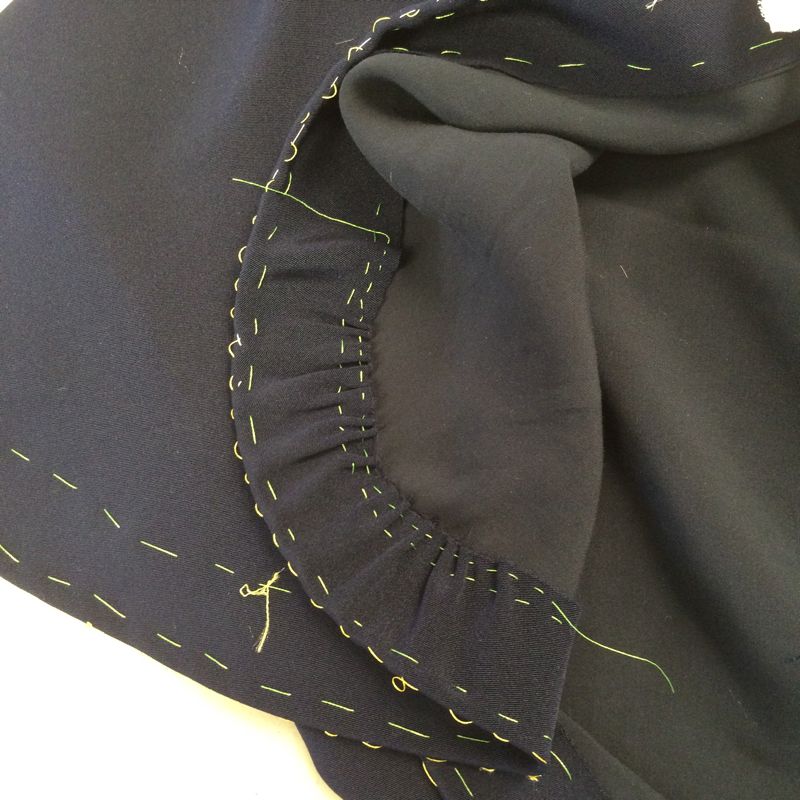 The flounce’s fullness is nicely distributed around its curved edge. 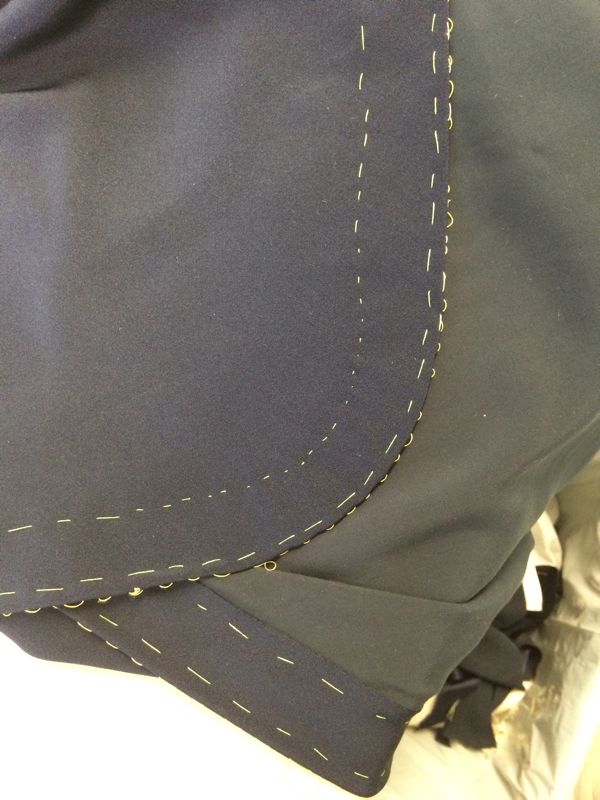 Finally, here’s another dress that Sharon draped and created using a Lacroix fabric that we found in Paris last fall. The sleeves are matched precisely. They were set in by hand, and that guaranteed perfect placement. 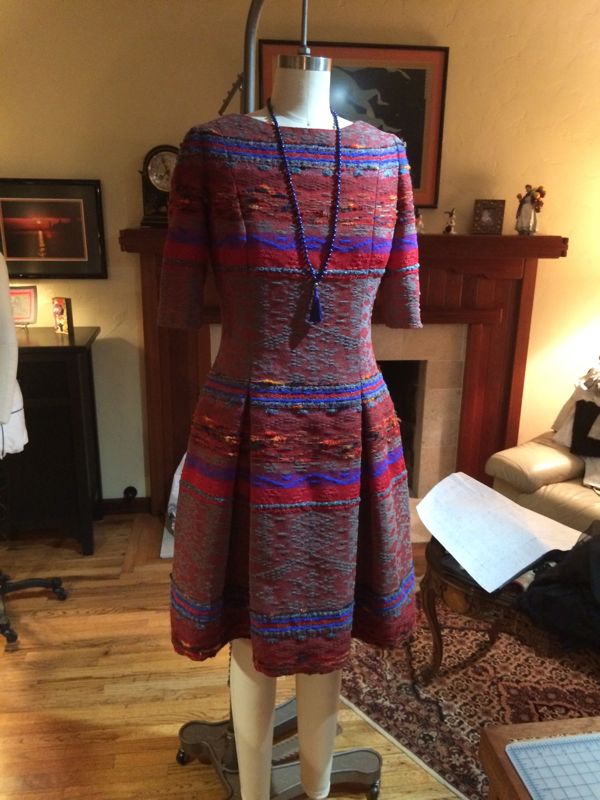 Where do you find sewing and design inspiration? What did you think about the projects I shared? Are you taking any sewing classes or attending any workshops in the near future? 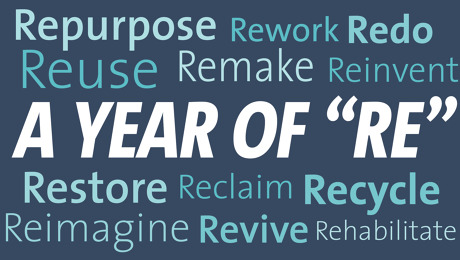