The Joy of Sewing with a Treadle Sewing Machine

Nostalgia, curiosity, love of simplicity, and appreciation of the mechanics draw people to try treadling.

I have heard many a sewing machine collector rave about the experience of treadling and praise the quality of the stitches and the remarkable piercing power of the treadle sewing machine. Many of these machines date back to the first half of the 20th century and still sew perfectly.

I found my treadle machine through a local Craigslist ad. The seller was a student at Parsons School of Design, New York, who—surprisingly—had never used it as anything other than a desk. The table was worn, and the sewing machine needed some oiling and lint removal. What sealed the deal was that the student lived, literally, around the corner from me. It took two trips, one for the machine head—a Singer 66—and one for the table itself, but I was able to move it entirely on foot.

I purchased a leather treadle belt at a sewing machine supply store in Manhattan, installed it with the aid of some YouTube videos, and in next to no time I was practicing my treadling skills. How difficult is it to treadle a sewing machine? Not very, but actual sewing does require some hand-foot coordination since getting the machine going requires a slight turn of the large, spoked handwheel followed by immediate foot pumping.

While most people think of treadles as a piece of history, in parts of the world where electricity is unreliable, treadles are still in use and don’t have the strong nostalgic association they have here. In the United States, many treadle machines were converted to electric as soon as motors became available. Often, the large handwheel was replaced with a smaller one as part of the conversion process; I own one like that, too.

Old treadle heads (the sewing machine part of the treadle setup) show up at my local flea market frequently. Finding an intact wooden treadle table—with or without a machine in it—is rarer. 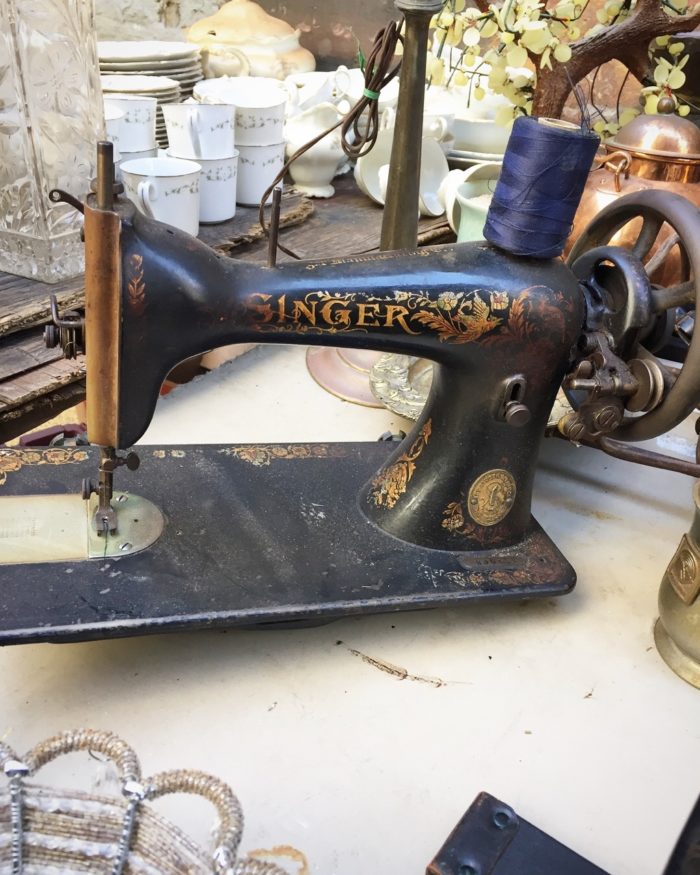 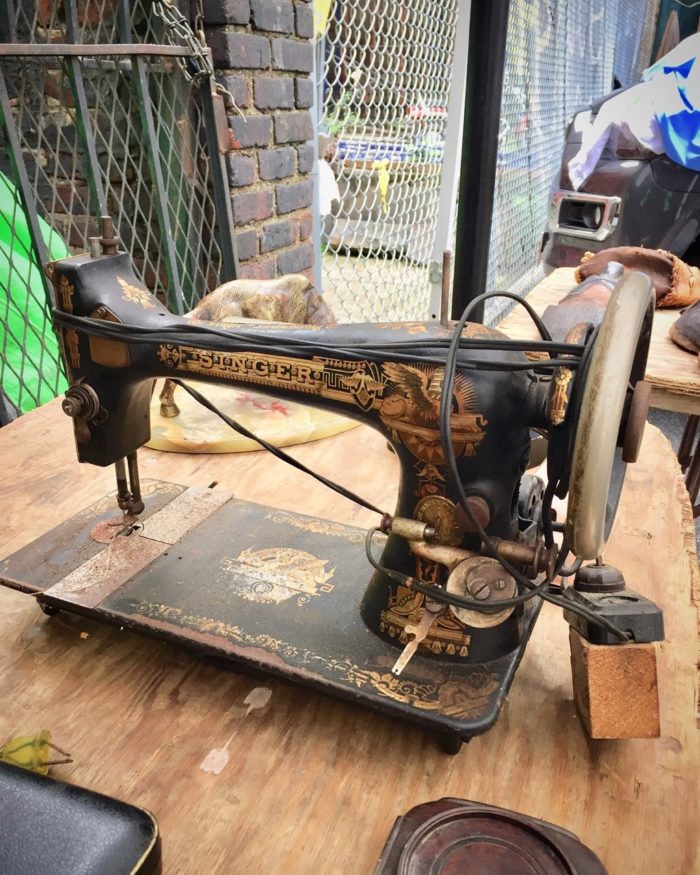 You may be wondering: In a world dominated by electrical appliances, why bother with a treadle sewing machine? Weren’t motorized machines a form of progress, sewing faster and with less effort? To be clear, appreciating a treadle sewing machine and enjoying using it doesn’t mean I’m going to dispose of my electric machines. But there’s something satisfying about knowing that I could, and I’d still be able to sew. 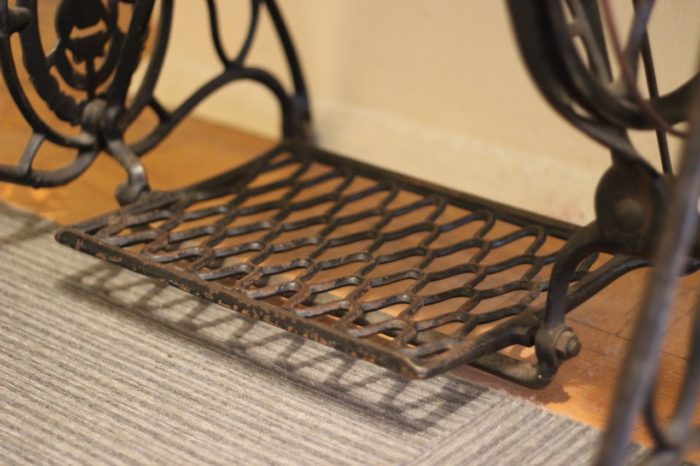 There are specific kinds of people who appreciate using a treadle sewing machine—let’s call them the four Treadle Types. Perhaps you identify with one or more.

Sewing on a treadle sewing machine makes a powerful statement about one’s position vis-à-vis contemporary culture. In the 21st century, garment sewers are already outside the mainstream. Given the ubiquity of low-priced fast fashion, most of us don’t have to sew our own jeans, underwear, and bathing suits, yet many of us choose to do just that. Sewing our own clothes is an expression of what we value—craft, process, working with our hands—and what we reject—planned obsolescence, mindless consumerism, generic fashion. Sewing on a tool we power ourselves simply takes our rebellion one step further. 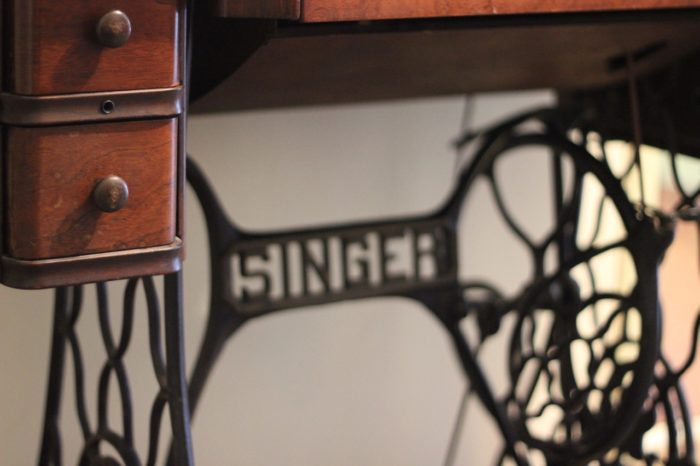 You don’t have to be a survivalist to appreciate the ability to sew without electricity. It’s reassuring to know that even if you lose power during a storm, you can still use a sewing machine. 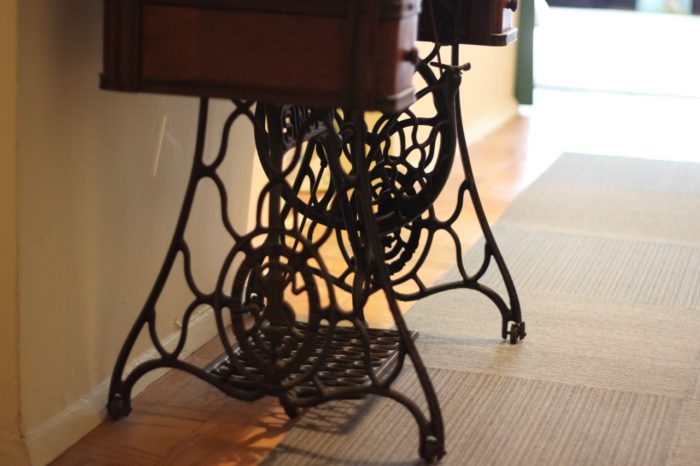 While you’re not going to burn many calories in the effort, there is something intensely satisfying about pumping a treadle with your feet. The experience is soothing, the clickety-clack of the mechanism, meditative. The sound is completely different from the drone of contemporary sewing machine motors.

I’m often surprised by how many people, upon seeing my treadle in the entryway of my apartment, remark that their mother used to own one, or their grandmother, or that they learned to sew on a treadle. It’s a reminder of simpler times and, especially, of machines that were built to last. Sewing with a treadle is a connection to our ancestors. It’s also a way of honoring our industrial past, a tribute to the workers who manufactured tools that, if properly maintained, last many lifetimes. 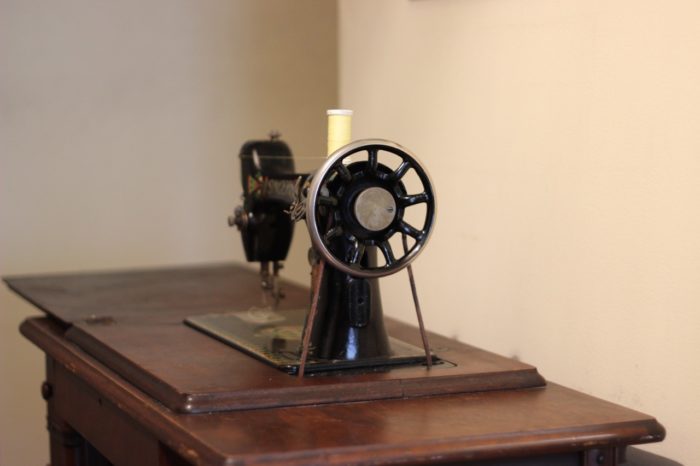 I suspect a lot of sewers (and even some non-sewers) are drawn to treadle sewing machines because, mechanically, they’re interesting and unusual. The design is elegant—so much so that the decorative cast iron treadle bases have often been converted into everything from nightstands to dining room table bases.

It isn’t difficult to get an old treadle working again. Generally, all you need is a treadle belt. The mechanics are out in the open and easy to access. Unlike, say, a mechanical typewriter, which truly has outlived its usefulness as a method of writing, a treadle sewing machine still stitches just as accurately, if more slowly, than a modern machine. Lockstitches are lockstitches, after all. 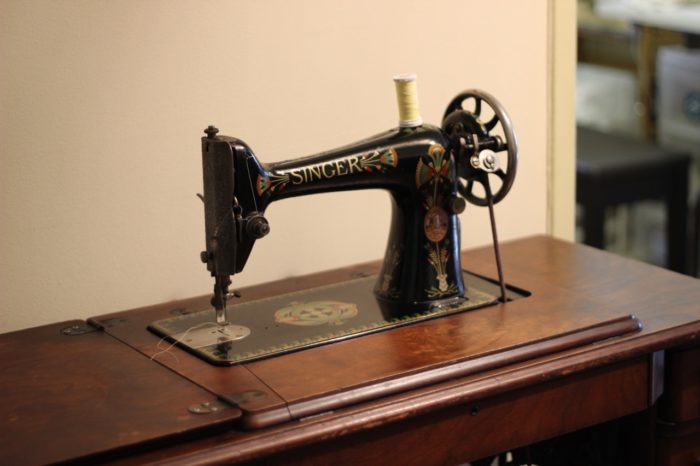 If you have ever identified as a rebel, a back-to-nature type, a nostalgist, or a tinkerer (or some combination thereof), it’s time you gave a treadle a shot. Describing the experience of treadling is like describing what it’s like to ride a bicycle or to ski—you really have to try it for yourself. You might find it too much trouble. Or you might, like me, come to love it.

A great deal of information about treadle sewing machines can be found online. I recommend the website Treadleon.net to be an especially good resource. 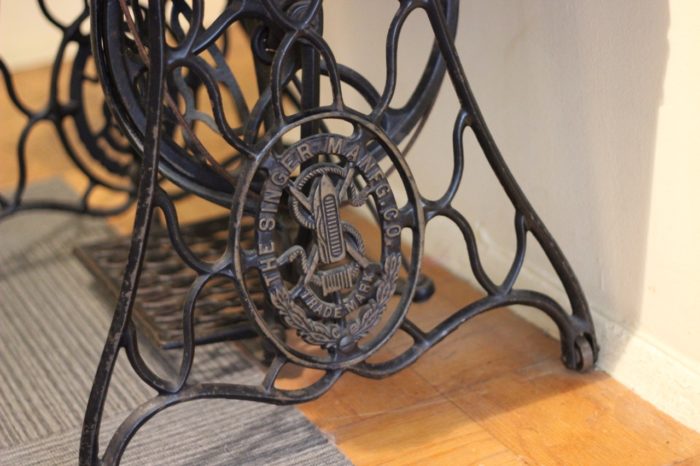