Adapt a Bra to Accommodate a Prosthesis

I want to help my friend modify her bras to accommodate a prosthesis because the ready-made ones are just too expensive. Which bra style works best, and how do I adapt it?

Cindy Elam replies: Your question is a good one that affects many women. The process of adapting a bra to accommodate a prosthesis is not difficult nor time-consuming. It requires only basic-to-intermediate sewing skills and a little attention to detail.

To create a pocket for a prosthesis, you can either use the instructions below to adapt a purchased bra, or adjust a bra pattern and make your own bras from scratch. Either way, start with a style that fits the woman’s frame and existing breast properly. Almost any style will work, provided it fits nicely and doesn’t put pressure on the scar tissue, which can cause discomfort. I find that a full-coverage bra like Élan B530 can be easily adapted to this purpose.

Use a soft, lightweight cotton knit to create the prosthesis pocket. My instructions produce a double-layer pocket that provides a bit of insulation from the initial coldness of the prosthesis and helps absorb perspiration in warm weather.

To make the pocket pattern, you’ll cut the shape of the cup as it lies flat on a table, with the bust point sticking up. I prefer the paper-and-pin method for making the pattern, which requires first taping two layers of paper over a piece of foamcore or cardboard. (You’ll use the two layers of paper to cut the top and bottom layer of the pocket bag.)

Next, tape the bra to the paper, smoothing the armhole and the cup’s upper and lower edges as much as possible. Don’t worry about the bagginess at the bust point of the cup.

Beginning at the strap, use a pin to poke some holes along the edges of the cup, working across the upper cup, along the seamline where the cup joins the center front, along the curved lower edge of the cup, along the side seam where the cup joins the band, and at the armhole edge up to the strap. Remove the bra from the paper, and trace around the holes with a pencil, smoothing out the shape. (A French or dressmaker’s curve is helpful.) Repeat for both layers. 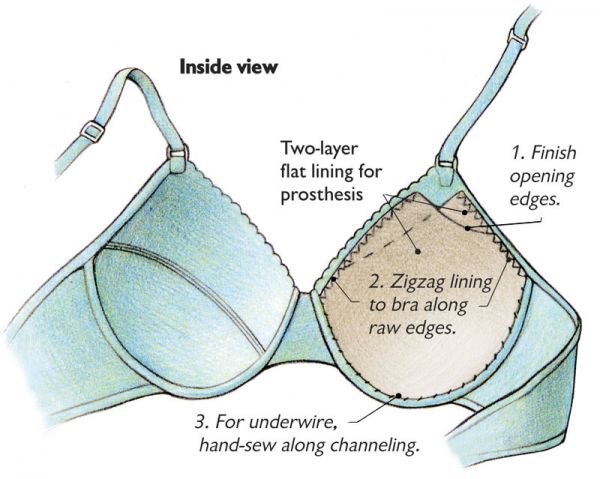 On one layer, draw a line from the armhole edge, about 1 inch down from the strap, diagonally to the top edge of the upper cup, about 1 inch from the cup’s center seam. This line forms the open edge of one layer of the lining, as shown in the drawing.

Cut each piece from the soft cotton knit, and finish the open edges with either a narrow zigzag, a serged edge, a fold-and-zigzag hem, or with narrow stretch lace. The cut edges won’t ravel, so your purpose is to stabilize the edge without adding bulk.

Baste the two layers together, leaving the finished edges open, as shown. Pin the pocket into the cup, and zigzag around the raw edges. (A three-step zigzag looks nice.) If you’re working on an underwire bra, fold under the edge along the channeling, and carefully straight-stitch along the edge, or hand-sew it with small stitches.

When you wear the bra, simply slide the prosthesis into the pocket from the top. It will stay put, even when jumping, dancing, or bending over.

Cindy Elam was a bra designer and owner of Élan Pattern Co. Her article “The Bra Dilemma— Solved!” appears in Threads #71.