The eighth Project Runway All Stars challenge put the remaining 6 designers into three pairs. “Flapper Fashion Face-Off” asked the challengers to design looks for one of three vintage 1920’s-style events: “The Afternoon Garden Party,” “The After-hours Speakeasy,” and “The Evening Social Soiree.” Each event type had two looks created by two designers.

The designers were charged with making the looks “inspired by” the 1920’s, but “for a modern woman.” Good luck with that!

Actress Gretchen Mol, presumably chosen because of her role on the Prohibition-era drama “Boardwalk Empire” on HBO, and fashion designer Jenny Packham were the guest judges.

Each designer had only to beat their face-off competition to proceed to the next episode. The winner was the best of the best, the loser, the worst of the worst.

On to the outfits! 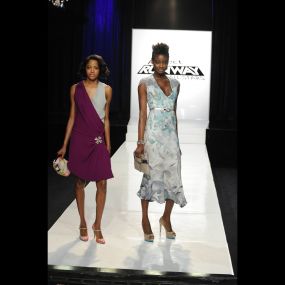 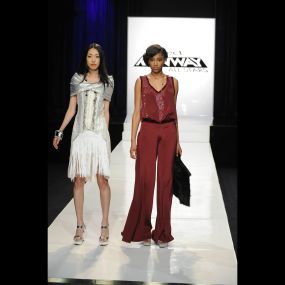 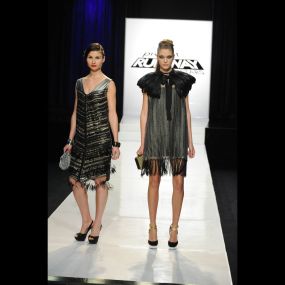 Anthony Ryan Auld won for his sheer and sparkly shift dress, topped with a feather capelet. The judges praised its mood – edgy and befitting a woman who would go to a speakeasy – and the silhouette. 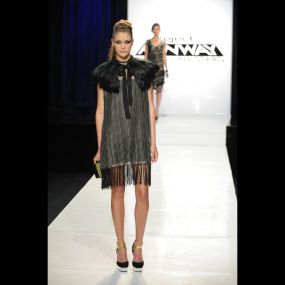 Laura Kathleen went home. The judges hated the cropped fur vest she included with her beaded shell top and flowing pants design. The top was lovely and flattering, but the pants had side-seam pleats which made the model look wider, as well as atrocious hems. The pants did Laura in. 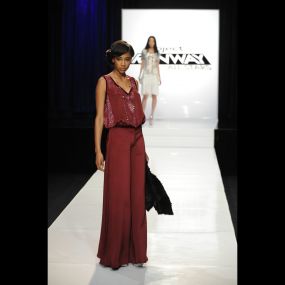 Despite Laura’s faulty sewing and the odd fur vest, did you think that she deserved to go home?

Was there another designer you think should have gone home?

The judges had much to praise about Joshua McKinley’s design, yet didn’t choose it to win. What’s holding Joshua back, in your opinion?

What do you think of the face-off concept? It could happen that a good designer goes home over a bad designer, just because they didn’t beat their face-off opponent. Is it really fair?

Who do you think is heading home next week?

Who do you think needs to step up their game to stay in the competition?

Anthony Ryan Auld (with Laura Kathleen in the background) works on the eighth Project Runway All Stars challenge, the Flapper Fashion Face-off.

Host Carolyn Murphy wore a lovely example of 1920's style. Do you know who designed it? Comment and tell us!