The second challenge of Season 14 was unconventional, to say the least. Judge Heidi Klum gave the designer contestants an early hint in the aptly titled episode, “It’s All in the Cards.”

“It’s important to play your cards right,” she told them, as they made their way to a Hallmark card shop. There, they were greeted by mentor Tim Gunn and Hallmark Signature Director of Branding Amy Merchant. Tim explained the rules behind the Unconventional Materials Challenge and gave the designers two minutes to grab as many cards as they could, as the cards would be what the designers would use to create their designs.

Back in the workroom, contestants began feeling the stress of the one-day time crunch and bartered with each other for different cards to make their envisioned designs. Edmond did not partcipate in the card trading. Later, in a one-on-one interview, he said that as far as he is concerned, the challenge is a competition, and it’s every man for himself.

The drama started when Swapnil asked his fellow designers about heavy-duty sewing machines. Fed up with not understanding Swapnil, Blake retorted, “I don’t know how to speak Indian, so I can’t understand.” The tension in the room was palpable. Swapnil responded by creating an “imaginary wall” between himself and Blake and continued his design.

When Tim came in to evaluate the designers, his criticism was harsh. David experienced the brunt of this. Tim told him that his design looked like a “papercraft project” that was “stiff, constipated, and stuck.” David was not the only one having a hard time with his design. Amanda admitted that while she had a great design for her top, she had no idea what to do with her skirt design. Tim advised Amanda and the other designers to create a garment that was unique and could move, but to stay true to who they are as designers.

The models came in for their fittings, and all the designers appeared content with their creations. Even the next day on the runway, there were no meltdowns.

Much like the last episode, the runway portion went by quickly, which did not allow time for avid fans to get up-close glimpses of the dresses. If you missed the episode or want to rewatch the designs on the runway, you can click here to watch the video on Project Runway‘s website.

This week’s judging panel was made up of Nina Garcia, Heidi Klum, Zac Posen, and Ashley Tisdale–who stars in Clipped, a new sitcom about a barber shop. 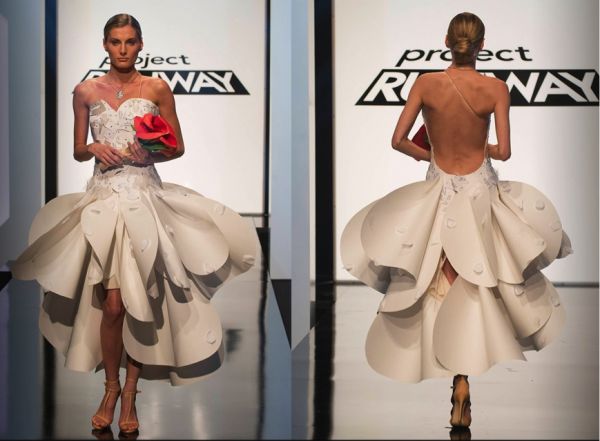 It was no surprise that Edmond’s bridal card design won. As Nina Garcia pointed out, he was the one designer who stuck to the theme of the challenge. A wedding is a big moment in just about every woman’s life. Edmond took a very Hallmark moment and successfully made a trendy bridal gown. The bodice was made of white cards that even said “Hallmark Signature.” Edmond exceeded the judges’ expectations while following the rules of the challenge and being true to his style. 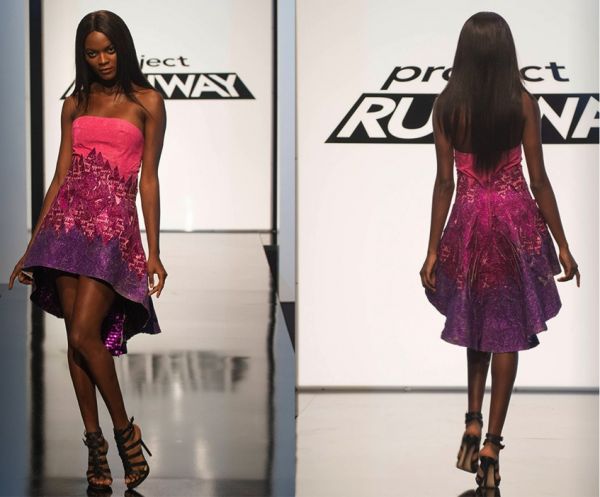 Blake’s design was praised for its pink to fuschia to purple ombré. The inside lining of the skirt was made of purple mosaic cards, while the midriff was made of a card that appropriately reads “there’s no such thing as too much sparkle.” The dress was rightfully deemed a celebratory dress by the judges. 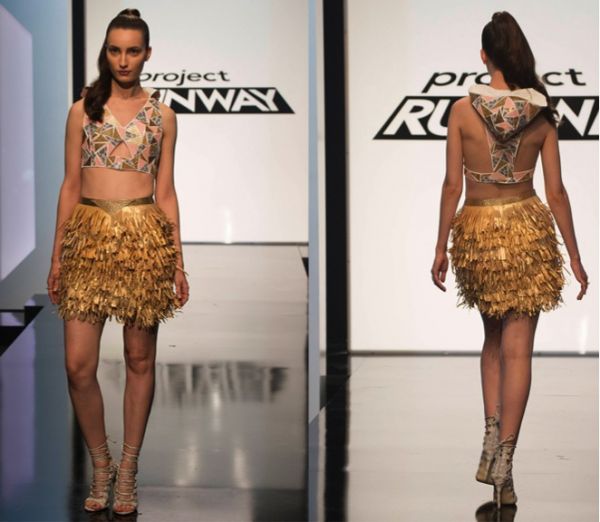 Kelly cut yellow envelopes vertically to form the skirt. She crumpled the slits of paper to give the skirt more movement. The hoodie crop top was made of a variety of colored triangles that resemble tiling. The design is clean and fun. 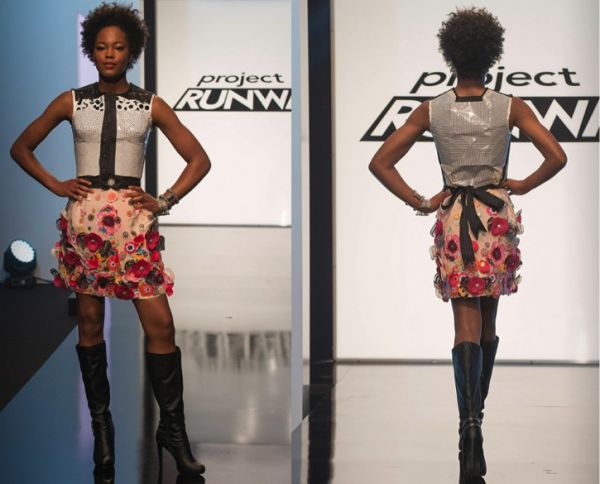 Swapnil’s design was based, in his own words, on Alice (in Wonderland) on acid. Though there is not much in this design that is comparable to the original Alice, the design was complex enough to land him in the top four. The top was black and white, with polka dots above the bust. The back of the dress was a black-and-white chevron. His skirt is what really impressed the judges and made the design pop with the varieties of colored flowers. The judges agreed that it looked like real fabric, and not cards.

David made a comfortable-looking hoodie. However, there was too much muslin. He cut out different gold typography and pasted it to a sparkly gray muslin. Although the sewing showed skill, he did not follow the rules of the challenge and was, unfortunately, eliminated. The judges agreed that he took the easy way out, and it did not work in his favor. 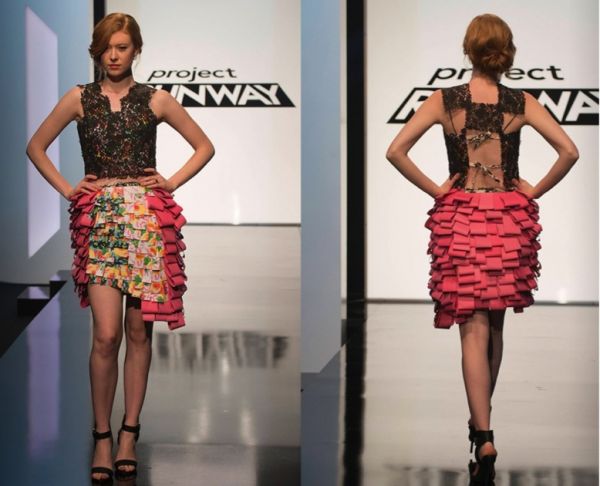 Amanda made a gorgeous two-layered top. The top layer was made from a material resembling lace that she pulled from cards. After dyeing it black, she put a floral material underneath to pull it all together. Her skirt failed to impress. Amanda seemed to have no idea what she was going to do for the skirt during her time in the workroom, and that lack of confidence appeared on the runway. Though her top was unique and well executed, her skirt is what rightfully landed her in the bottom two. 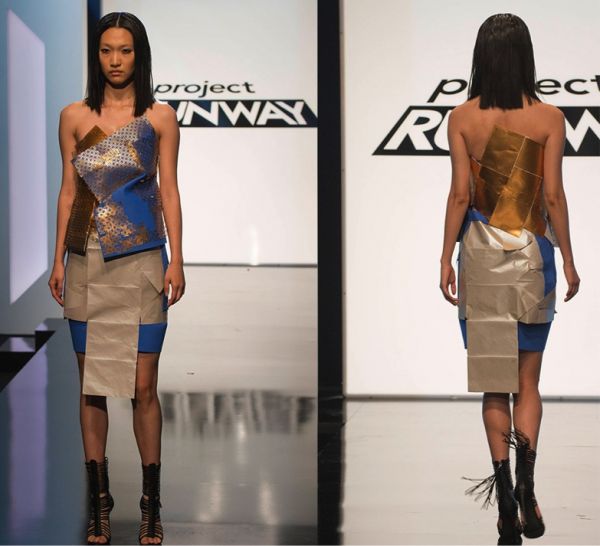 Merline’s design was made purely from gold, silver, and blue envelopes. Unlike the top four designs, her design leaves no ambiguity: it is clearly made of envelopes. She followed the rules of the challenge and secured herself a place in the next round.

Ashley was told that she was very lucky that she won the previous challenge. As depicted in her design, she did not follow the rules of the challenge and disappointed Heidi and the other judges. Her mustard-colored poncho was covered in diamonds and other shapes cut from a shiny gold card. She used too much muslin, which was not the object of the challenge.

Laurie made a two-piece design that fits her model well. She used gold paper off cards to give the top a three-dimensional aspect. The skirt starts of with shiny gold envelopes giving the illusion of a belt. It continues down into envelopes used to form tiers and finally ruffles.

Lindsey’s creation was unlike all the others. She stuck with a neutral palette for the plain dress. Amazingly, Lindsey’s use of envelopes makes the dress look like it is made from fabric, not paper.

Joseph made a dress with a bodice of gold spots that jutted down at a sharp angle where he then added pockets. The simple dress skirt was made solely of pink cards. Tim Gunn said it was “very Kate Spade.”

Candice’s dress, unlike any of her competitor’s designs, is made of a shiny material that gives it the illusion of being anything but paper. Fellow contestant David told her that it looked like metal, not cards or paper. 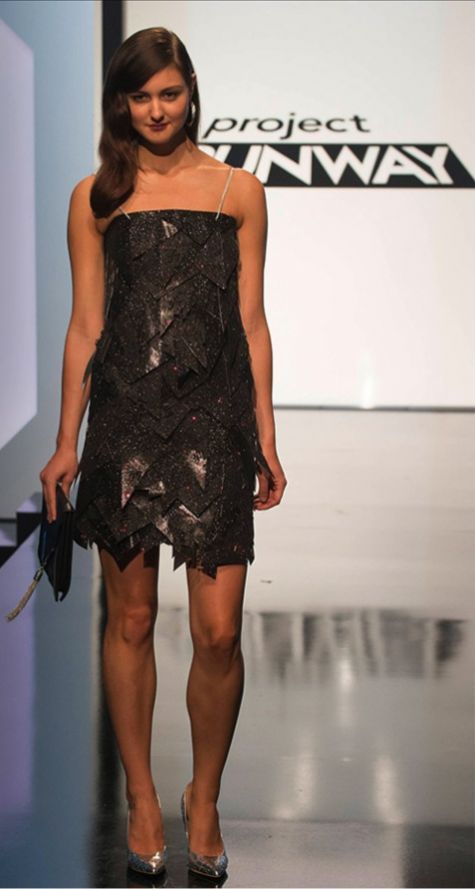 Jake used one type of black envelope throughout. The sparkles make the dress pop and stand out on the runway. The dress’s sharp angles give it an edgy look. 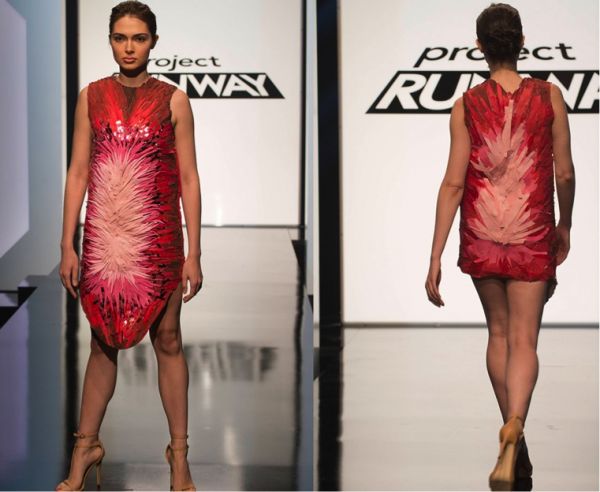 Gabrielle created a dress in a variety of pinks and reds. It is obvious that she put a lot of time into her design. Admitting early in the episode that she was having difficulty with the challenge, she still made something creative while sticking to her style. The back of the dress has a short, straight hem, while the asymmetrical hem in front adds interest.

Hanmiao created a boxy dress using only envelopes. The dress’s neutral tones complement its style. Hanmiao said her design was driven by the idea of being “young, edgy, and fun,” and it appears as though she accomplished just that.

Did you watch this episode? If so, what did you think of the designs? Do you think the judges got it right? Which designer are you rooting for?

The designers gather just before hearing instructions for the second challenge.

Amy Merchant (Hallmark Signature director of branding) and mentor Tim Gunn at a Hallmark card store tell the designers about the challenge.

Contestant Blake works on the muslin for his design in the Unconventional Materials Challenge.