David Page Coffin, former senior editor of Threads, passed away May 2, 2021. He was a fixture at the magazine and was well-known across the country as a book author, teacher, and mentor to sewing students.

David at Taunton and Threads

By 1988, he had joined the staff as assistant editor, and was promoted to associate editor in 1990. His book Shirtmaking: Developing skills for fine sewing (The Taunton Press, 1993) continues to be a favorite reference for those wanting to learn key techniques for making beautiful shirts. 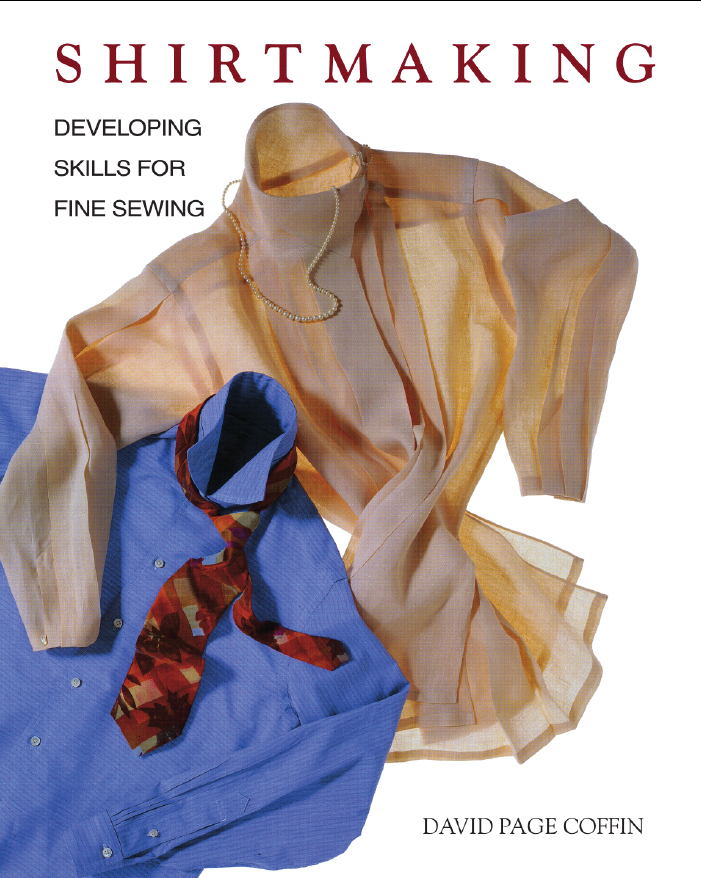 In 1998, David became senior editor and remained in that role until his retirement from Threads in 2004.

Throughout his tenure at the magazine, he was driven by a passion for fine sewing, a deep respect for his authors, and a sense of responsibility to the Threads readership. He left a lasting impression on our publication and the home-sewing industry. His final contribution as a staff member was a vest with a dramatically pleated collar, which earned a place on the front cover of Threads #114, Aug./Sept. 2004. 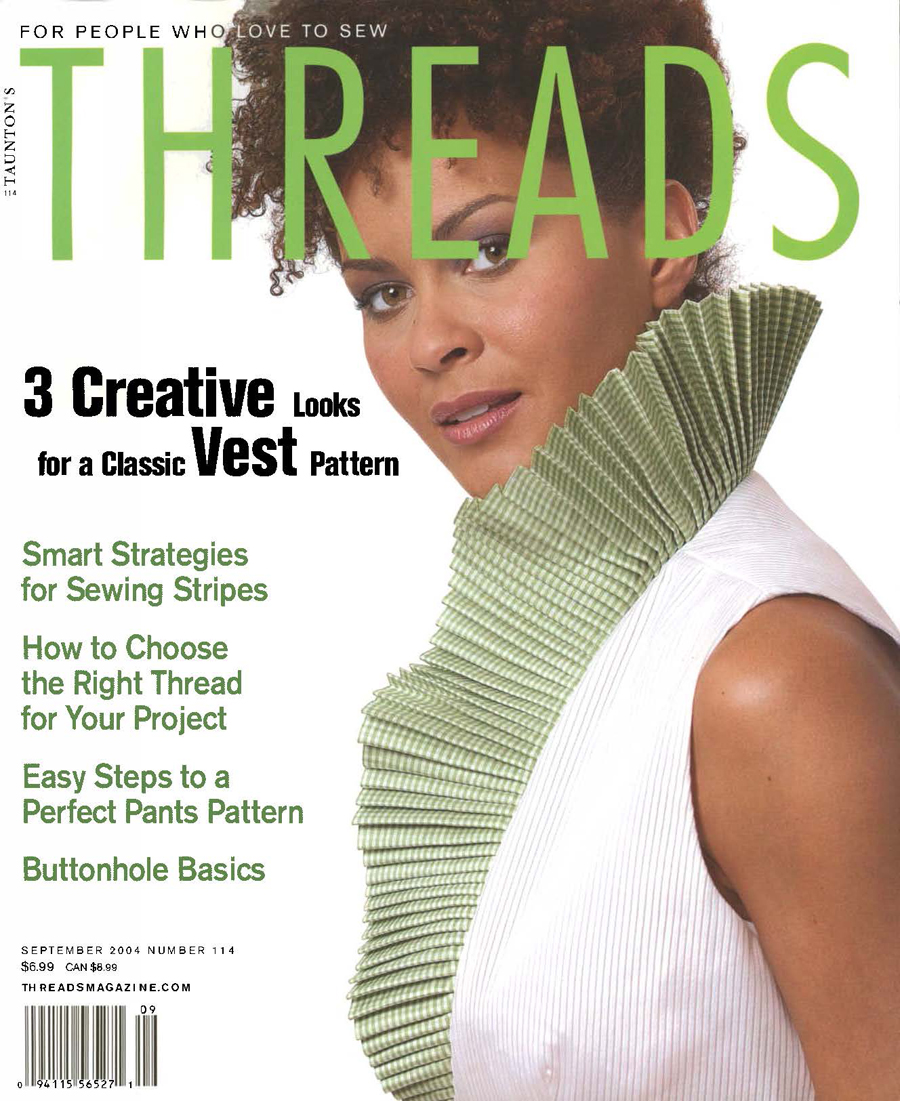 In his post-Threads career, David published additional books on making trousers, designing shirts, and shirt fitting. He also was a Craftsy instructor, teaching shirt and pants construction. One of his many strengths was discovering and explaining the finer details of well-made garments. He was equally fascinated by functional clothing and art-to-wear.

In addition to being a talented writer and editor—and, of course, sewer—David painted and exhibited watercolors, was a skilled photographer, composed electronic music, and played guitar. He was an avid reader and lover of films, and a thoughtful conversationalist on all these topics and more. His open-minded embrace of creativity in all its forms helped him excel at spotting and developing many of Threads‘ most prolific and popular authors.

Some of David’s former colleagues and authors he cultivated reminisced about working with David.

“When I first came to Threads in 2001, the administrative assistant’s position had been empty for the previous month. Every square inch of my office’s large desk surface was covered with high piles of paperwork and file folders. Much of the information necessitated immediate action; some simply required filing. I needed help determining what to do with each item. David  endured my endless questions. He was patient and always willing to help me unravel what my next steps should be. I was grateful for every moment he spent explaining not only what to do, but why it needed to be done.

“I asked David how he had come to work at The Taunton Press, and he willingly shared his story. His prior job required a dress shirt and tie each day. (However, he often wore sweatpants and a T-shirt at Threads.) He enjoyed sewing, and wanted to make his own shirts, but there were few men’s patterns back then, and no books about sewing a man’s shirt—also no Google, YouTube, or Threadsmagazine.com! David taught himself via trial and error, and ultimately thought he should write a book on the subject. He reasoned that there were others who might also be interested in what he had learned. He approached Taunton’s book editors, and was pleased when they welcomed his idea.

“When an assistant editor’s position opened at Threads, he was encouraged to apply and got the job.

“David had an incredibly persuasive personality. We were permitted 30 minutes for lunch, and although we had an in-house cafeteria offering a varied and delicious menu, David often preferred eating at one of the many local restaurants. He convinced us to join him. The mere fact that we had to drive to enjoy any restaurant meant our off-campus lunches were always longer than 30 minutes. Miraculously, to my knowledge, none of the higher-ups ever complained, and sometimes even joined us. During the warm summer months, he frequently convinced us to remain at the Taunton Press and eat outside at an old picnic table. I have so many fond memories of our lunches. The shared conversations and laughter made the time spent together truly special.

“David was a great member of our staff. We were like a family away from home, and that family atmosphere helped make the work demands pleasurable. We were blessed to have him as our ‘social coordinator,’ but we were even more blessed by his sewing expertise in writing and editing what continues to be a well-respected magazine. David will be missed.”

“David was a seasoned editor when I joined Threads in 1998. He seemed to do everything effortlessly and he was always helpful as I struggled to learn. I still remember his words of wisdom regarding articles – they should come together like ‘a string of pearls.’ And whether we were traveling together to expos, or close to home, he knew the good restaurants and we always enjoyed good food.”

“On my first day at Threads, in 2001, David took it upon himself to teach me the complexities of photography. (Yes, the editors used to take their own photos. David was the only one who could be counted on to do a decent job.) I’m afraid his efforts were wasted on me that day—just being in the Threads office was pretty overwhelming. However, from then on I knew I could count on him to be a patient guide through the learning process and, soon enough, a good friend. Lunchtime conversations with him were always fascinating. I still wonder ‘what would David think?’ when I watch a series on Netflix or discover a new author. And how could I not be entertained by his story of an early job he had, in which he had to dispose of a mummified skunk? David could embrace the sublime and the ridiculous.

“He wore the mantle of senior editor lightly, but you couldn’t help realizing he was extraordinarily intelligent and insightful, as well as supportive of the rest of us editors. While I am sure he was fully aware of our individual weaknesses, he also recognized our strengths. I found he was always able to deliver the right words at the right time to get me through a challenging situation. I’ve missed him since he retired, and will miss him even more now.”

“David was a true friend and colleague and collaborator. He was such good company when we worked on different projects. David mastered so many creative pursuits, his impeccable sewing of course, but his writing was top-notch, his music, his perspective in photography and graphics. When I wrote for Threads, I always hoped he would be my editor because he made my writing so much more elegant. When I discovered that he had done the illustrations for his Shirtmaking book (which still sets a high standard), he was modest about it. I loved those drawings, they added such a refinement to the book. At the time, I had a new passion for watercolor and he sat me down for for a half-hour art lesson that made a huge difference in my work from that point onward.

“He came into the sewing world and quietly elevated the atmosphere. When he came out to Oregon to work on a couple of articles, it was clear he longed for a different place and it seemed so right when he and Ellen (his wife) moved here.

“He gave me one piece of very good advice when I was in a conundrum about how to move forward. He told me, ‘Step out and claim your territory,’ a phrase that shifted my inner core. It gave me courage that he saw something in myself that I had been hiding, and I have quoted him to others with that exact phrase.

“He will be missed and remembered with love and admiration.”

“I still remember the thrill of having my first article published in Threads. ‘Stenciling on Fabric,’ (Threads #28, April/May 1990) was to be the first of many articles David guided me through in our 18 years sharing our love of textiles, design, and sewing. 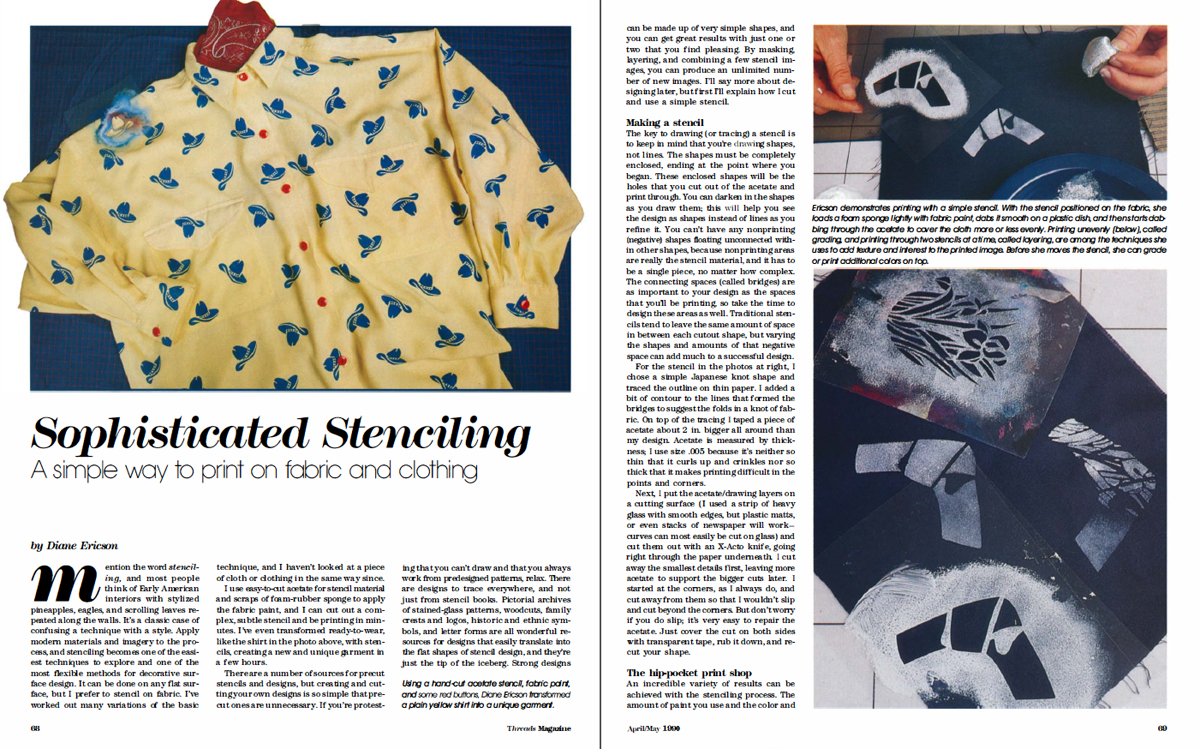 “As a mentor and a friend, David was a genius at seeing the big picture of what we all had to offer and knowing the best way to share that on the page.

“Coming into our studios, he always had eye for details and celebrating the joy of designing and sewing with Threads readers.

“I think he knew that highlighting each of us would raise us all . . . inspiring makers worldwide.

“I was saddened to hear of the passing of my colleague David Page Coffin. We met in 1990, when he came to my studio in San Francisco to meet me. He was the editor I worked with for numerous articles.

“Over the years, we would meet for dinner, either in San Francisco or other places, where I got to know him better. David was known for his Shirtmaking book, as well as his work for Threads, but he also was a fine artist (painting), and musician.

“When I was planning my move from San Francisco to New York, at first David said that I should ‘flower where I was rooted.’ That opinion changed when he decided to move to the West Coast. During a conversation we had in Toronto, he told me that he would be moving west, the same time I was moving east. There was some sort of odd symmetry there.

“I’m saddened that he is no longer with us in person, but he has left a legacy of knowledge in the form of his books, as well as the articles he shepherded through to the pages of Threads magazine.

“He will be missed.”