“High Style” is Filled with Fashion Inspiration and Information

If you don’t think you’ll be able to get to NYC to visit the current fashion exhibit at the Metropolitan Museum of Art (American Woman: Fashioning a National Identity) or the related exhibit at the Brooklyn Museum (American High Style: Fashioning a National Collection), you’ll want to read “High Style” by Jan Glier Reeder. Nearly every page of this 256-page comprehensive book includes a  captivating, full-color photo of one of the collection’s lavish garments or accessories.

It is the first extensive publication depicting Brooklyn Museum’s internationally renowned historic costume collection. The nearly 25,000-object collection comprises fashionable women’s and men’s garments and accessories from the 18th through the 20th century. It features sumptuous 19th-century gowns from the House of Worth, exquisite works by the great 20th-century French couturiers, iconic Surrealist-based designs of Elsa Schiaparelli, sportswear classics from pioneer American women designers, and the incomparable draped and tailored creations of Charles James, plus much more. The exquisite photos will provide you with unexpected inspiration for your personal sewing and fashion design.

In 2009, the Brooklyn Museum and The Metropolitan Museum of Art entered into a groundbreaking long-term partnership to care for Brooklyn’s collection. The objects were transferred to The Costume Institute at the Metropolitan, with Brooklyn maintaining curatorial access. The exhibits currently on display at both museums will run through August.

The book’s author, Jan Glier Reeder, is the Consulting Curator for the Brooklyn Museum Costume Collection.

"High Style: Masterworks from the Brooklyn Museum Costume Collection and the Metropolitan Museum of Art" by Jan Glier Reeder is filled with detailed, full-color photos of fashions and accessories from the 1760s through the 1980s.

Madame Eta Hentz was born in Budapest and started her own company with Ann Sadowsky in the late 1930s. Her clothes were thought to be flattering, especially for matronly figures and were readily available on a ready-to-wear basis. She is most known for her Grecian-themed collection of 1943, featured here, which received much praise.

This very early sportswear sweater combines the aesthetics of fashionable dress through its large gigot sleeves and overall silhouette with the informal sportiness inherent in any knit fabric. Casual wear, such as this, is rare in museum collections because of the nature of its use and the intrinsic value people placed on more formal attire.

Lamé , a fabric which incorporates metallic threads and is known for its festive brightness, was often used in evening wear of the 1920s, 30s and 40s. Jessie Franklin Turner, the designer of this dress, was widely known for her evening wear. This example demonstrates one reason for her renown, as it incorporates pristine bias construction and inventive piecing of the sleeves, allowing the dress to drape the body in a dramatic, alluring way.

Charles James produced some of the most memorable garments ever made. He began his design career in the 1930s. It peaked between the late 1940s and mid-1950s, when his scarce and highly original gowns were sought after by society's most prominent women. Personally draping and constructing the garments that bear his label, he is considered to be the only American to work in the true couture tradition. 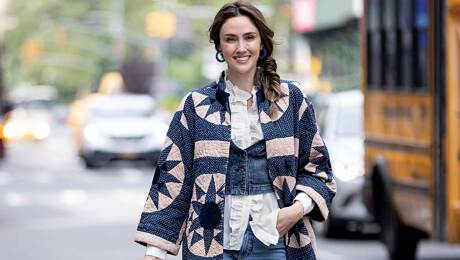 3 Ways to Make a Quilted Jacket 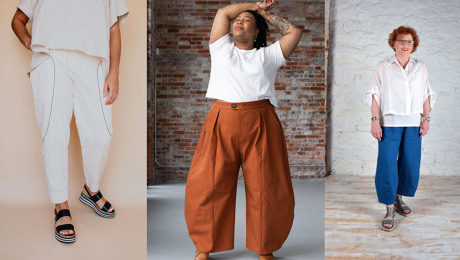 With lantern pants in so many stores and sites, why not try making your own pair and fitting them to your preferences?